NUCLEAR TERRORISM IS HERE, AMERICANS HAVE DIED AND OUR GOVERNMENT HAS LIED

Dimitri Khalezov talks about nuclear terrorism, 9/11 and who is responsible for terror attacks that have killed thousands of Americans.

What if someone could prove that the terrorist bombs, Oklahoma City, Beirut Marine Barracks, the Khobar Towers in Saudi Arabia, the Bali attacks and more, many more weren’t car and truck bombs at all, not the kind we were told, what then?  Buildings thrown into the air like toys, mushroom clouds rise a dozen miles, explosions larger than anything known previously, many times larger than the biggest bomb, even larger than exploding munition ships from World War 2.  These have happened over and over, been misreported in our news, nuclear attacks, new precision weapons that emulate conventional explosives.

Khalezov says that when we hear truck or car bombs, sometimes something else is going on, something sinister.  One case in particular stands out, the murder of over 200 US Marines in Lebanon in 1983.  Americans are told that a truck bomb blew up a four story building, heavily reinforced, killing everyone in and near it.  The explosion could be seen in Israel and felt in Cyprus.  We are told this was the largest non-nuclear explosion in history:

The suicide bomber detonated his explosives, which were equivalent to 12,000 pounds (about 5,400 kg) of TNT. The force of the explosion collapsed the four-story cinder-block building into rubble, crushing many inside.It is said  to have been the largest non-nuclear blast ever (deliberately) detonated on the face of the earth. “The force of the explosion,” “initially lifted the entire four-story structure, shearing the bases of the concrete support columns, each measuring fifteen feet in circumference and reinforced by numerous one and three quarter inch steel rods. The airborne building then fell in upon itself. A massive shock wave and ball of flaming gas was hurled in all directions.”

About 20 seconds later, an identical attack occurred against the barracks of the French 3rd Company of the 6th French Parachute Infantry Regiment. Another suicide bomber drove his truck down a ramp into the building’s underground parking garage and detonated his bomb, leveling the headquarters.

The claim is that the explosives in the truck were equal to 6 tons of TNT and made the largest explosion known to man, even larger than the blast made when, in 1944, the munitions ship, USS Mt. Hood exploded.  However, the Hood was loaded with 4000 tons or as we call it now, 4 “kilotons” of explosives.  Beirut was bigger, much bigger, not 6 tons, not even 4000 tons but 10,000 tons.  The Marine and French barracks in Lebanon were destroyed by two variable yield nuclear weapons, each set to 10 kilotons, roughly half the size of the nuclear weapon that destroyed Hiroshima.

Until 1992, Dimitri Khalezov was a Soviet military specialist.  His job?  He tracked the use of nuclear weapons around the world, not just from known nuclear states and not just the bombs we all fear will rain Armageddon on us and our

We talked about this today.  I was skeptical.  Then he sent me something that hit me between the eyes.  I was asking him if he knew about the January 24, 2010 “suicide bombing” in Moscow that killed 35 and injured over 100.  He sent me an article from CNN, something I had never seen and something that, if read carefully will take your breath away.

PROOF OF A TERROR NUKE ATTACK IN MOSCOW

The BBC said it “sounds like a car bomb.”  They also quoted it as being described as an “almighty explosion.”  This was how the explosions two weeks ago were described in Moscow, but this wasn’t the first time.

We have seen these bombs before, damage on a massive scale, and were told it was fertilizer in the trunk of a car set off by a mobile phone.  Then I read the statement carried in the CNN article, one I have been told has been suppressed.  This was another similar bomb, a truck bomb used to attack a Moscow apartment complex.  The year was 1999.

This time, the truth got out, for a while at least, picked up by CNN but quickly suppressed.  This is what the authorities in Russia said:

The link to the CNN video has been disabled, but we have the description as given to CNN by Russian officials:

“At least 17 people were killed and more than 115 injured when explosives hidden in a truck or an underground pipe blew off the front of a nine-story apartment block in Volgodonsk, about 800 kilometers (500 miles) south of Moscow, Russian security officials said.”

A truck can carry 2 or 3 tons of the explosives described, no more, certainly not 100 tons or 300 tons.  However a rail car holds 60 tons of fertilizer, a common way of transporting this material.  The problem is, there are no railroad tracks in the area and no one saw a train explode.

This explosion could have been nothing but a nuke.  Figure a ton of TNT is roughly the size of a Russian car.  Did someone miss 100 cars?  300 cars?  A small train, no tracks mind you, just a train driving down the road?

In 1996, a United States Air Force housing complex was destroyed by a “truck bomb” in an attack almost identical to Oklahoma City.  20 were killed, 19 Americans and 372 were injured.  The explosion was, as with Beirut, the “largest conventional explosion known to man.”

Not all large truck bombs have used ANFO. On June 25, 1996, Saudi terrorists sponsored by Iran attacked the Khobar Towers barracks, a high-rise building complex in a densely populated urban environment in Saudi Arabia. T tanker truck loaded with at least 5,000 pounds of plastic explosives was driven into the parking lot in front of the Khobar Towers residential complex in Dhahran. Nineteen American service members were killed in the blast, and hundreds of other service members and Saudis were injured. There is no doubt that the extent of the casualties at Khobar Towers resulted, in part, from the extraordinary size of the terrorist bomb. Reports initially estimated that the bomb contained the equivalent of 3,000 to 8,000 pounds of TNT, but a study by the Defense Special Weapons Agency concluded that the power of the bomb was actually closer to 20,000 pounds of TNT.(100 tons) 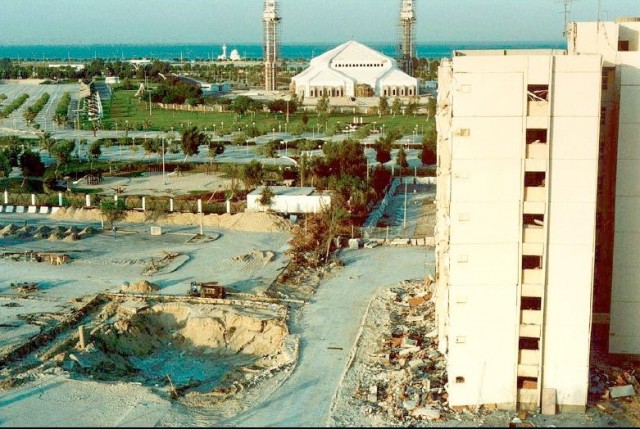 We can talk all day about imaginary explosives that can equal a hundred tons of TNT.  We can talk ten trucks or twenty but we had one hole and a blast radius of such power and acceleration that, again, no conventional explosive could come close.  The story is almost a perfect match for Oklahoma City. 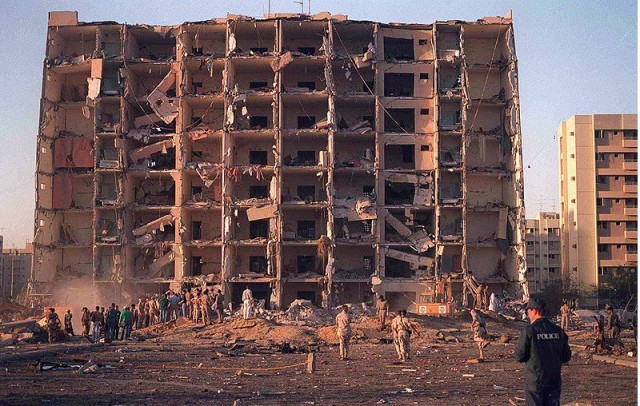