Murder in Tampa studied by Russia?

What could be so interesting about a murder in Tampa that Russian President Medvedev would have the Russian Academy of Medical Sciences study it? There have been more horrible cases around the world involving a parent killing children. Julie Schenecker said she killed them because they were talking back. There have not been many reports locally on this story and even less nationally. The cable news shows have been doing their usual reporting on politics and Egypt as if there has been nothing “news worthy” to do any real reporting on.

It can’t be just about the drugs used by the military to address the mental health of the troops. While Medvedev may be interested in drugs used and the mental health state of our troops, this wasn’t about a soldier killing but just about a wife killing her teenagers. Is he interested because he is looking at weaknesses in our military? According to this report they have been paying attention to the reports on prescription drugs the troops are given. But why this case?

Julie Schenecker is unlike other parents because her husband is Colonel Parker Schenecker with Central Command.

Family Massacre In US Linked To American Military Murder Drugs 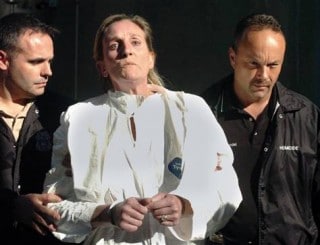 A chilling report prepared for President Medvedev by the Russian Academy of Medical Sciences (RAMS) says that a massacre in the United States committed during the past fortnight has as its “most likely cause” what are described as “murder drugs” being given by the millions to American Soldiers by their Military Leaders for the fighting of their Nations wars in Afghanistan and Iraq.

According to this report, Julie Schenecker, the wife of US Army Colonel Parker Schenecker, shockingly murdered her two children, Carlyx, age 16, and Beau, age 13, in a sudden bloody rampage that has left family and neighbors stunned as to why a devoted wife and mother would point blank shoot her most beloved possessions to death.

US media reports about Julie Schenecker describe a devoted wife to her career US Army Officer husband (who at the time of his family’s massacre was stationed in the Middle East) and loving mother to her children, all being described as the “perfect” all-American family.

Educated at the University of Iowa, Julie Schenecker had also accompanied her husband to the many US Military bases he served at around the world, including in Germany where she worked as a Russian linguist for the US Army in Munich.

In 2008, Julie Schenecker and her family moved to Tampa, Florida where her husband, by then a US Army Colonel assigned to the US Central Command which oversees the wars in Afghanistan and Iraq, and began living a life described by her childhood friend Sylvia Carroll as being the “epitome of what wholesome is”.

The weekend before the January 27th massacre of the Schenecker children, however, their “wholesome” mother purchased a .38 caliper pistol complaining in a note found by police that the three-day gap between buying and taking the gun home would “delay the massacre.”

On the day of the massacre Julie Schenecker shot and killed her son Beau on the way to soccer practice, then drove to their upscale home and shot her daughter Carlyx in the head while she studied at her computer. When apprehended by police a bloodied Julie Schenecker told police she killed her beloved children for being “mouthy.”

Up until here the interest was about Julie Schenecker but now it switches to being about the drugs and suicides in the US military.

The same, however, cannot be said about her husband, US Army Colonel Parker Schenecker, who, like all American Military personnel heading towards their war zones in the Middle East and Asia, was “more than likely” given one, or a combination of the powerful psychotropic drugs Zoloft, Prozac, Paxil or Cymbalta, all of which carry mandatory “suicide warnings” and have been linked to nearly every single massacre in the United States for the past two-decades.

So prevalent have these psychotropic “murder drugs” become among the US Military that in November, 2010, the Citizens Commission on Human Rights International issued an alarming report that, in part, says:
“In 2009 there were 239 suicides within the Army, including the Reserves, 160 active duty suicides, 146 active duty deaths from drug overdoses and high-risk behavior, and 1,713 suicide attempts, says the Army’s suicide report released in July.

More troops are dying from their own hands than in combat, says the Army report, titled “Health Promotion, Risk Reduction, and Suicide Prevention.” Thirty-six percent of the suicides were among troops who were never deployed.

Also astonishing is the psychoactive prescription drug rate among active duty-aged troops, aged 18 to 34, which is up 85 percent since 2003, according to the military health plan, Tricare. Including family prescriptions, since 2001, 73,103 prescriptions for Zoloft have been dispensed, 38,199 for Prozac, 17,830 for Paxil, and 12,047 for Cymbalta. All of the drugs carry a suicide-warning label.

In addition to the spike in SSRI antidepressant prescriptions, prescriptions for the anticonvulsants Topamax and Neurontin rose 56 percent in the same group since 2005, says Navy Times. The FDA warned last year that taking these drugs doubles suicidal thinking.

In fact, 4,994 troops at Fort Bragg, N.C., are on antidepressants right now, says the Fayetteville Observer. Six hundred and sixty-four are on an antipsychotic and “many soldiers take more than one type of medication.”
Troops may also be taking Chantix, an antismoking drug so linked to violence and self-harm that Secretary of Veterans Affairs James Peake was forced to defend its use before the House Committee on Veterans Affairs in 2008 even in drug trials.

So now we have a disinterested US media, even with 24-7 cable news coverage, soldiers given drugs by the military added to the fact that Russia is so interested in all of this they had the academy study it. This is more than a national disgrace on how we treat the troops and our veterans. This being studied by Russia is a National Security issue but few seem to care.