Home History Helen Thomas on CNN Joy Behar “Jews are NOT semites, most of...

Joy Behar just got a lesson in global politics from one of America’s wisest and most experienced journalist.   Ms. Behar is a wonderful comedian and show host.   What makes her successful is that she’s really just like you and me.  She’s trying to find the answers and reach out.  And so no one can blame her or any of us for that matter if we think that Semites are Jews.   In the USA, that’s what we’ve been conditioned to know.  And boy were we wrong.  Helen Thomas, an Arab American, made it clear that she’s a Semite and not Jewish.  How can that be right?   Have we been duped?

Let’s take a longer look at what a “semite” actually is…..

After much research, I have found that the phrase “Anti-Semite” is being misused primarily in the USA and causing us harm as we debate the issues concerning U.S. Middle East Policy and Israel.

I have found Semitic peoples are Arabs too and if we mean to charge another with being “anti-Israel” or “anti-Jewish”, use of the phrase “Anti-Semitic” is very confusing as it makes it seem that we are charging the person with being Anti-Arab.  I don’t’ think that’s the intent, is it?

Semite refers to a language family and culture of largely Middle Eastern origin, from Samaria, now called the Semitic Culture and languages. This family includes the ancient and modern forms of Akkadian, Amharic, Arabic, Aramaic, Ge’ez, Hebrew, Maltese, Phoenician, Tigre and Tigrinya among others.  As language studies are interwoven with cultural studies, the term also came to describe the extended cultures and ethnicities, as well as the history of these varied peoples as associated by close geographic and linguistic distribution.

In the USA, the Zionist Political Movement has successfully connected the phrase “Anti-Semitic” into being anti-Israel and/or anti-Jewish.  Successful marketing?  You betcha!  Incorrect and doing harm to our intellectual and genuine debate?  Absolutely!  We need to adjust for the sake of everyone so the debate is very clear.

Finally, as you make your case forward, please consider that;

With knowledge and correct phrasing, I strongly encourage all to make their cases forward and let’s together figure out what’s in the best interests of humanity and the globla citizenry.

In 2011, it’s time we take a longer look at our foreign policy in the Middle East.  Are we on the wrong side of history?  Is our moral compass out of whack?  Shouldn’t we be standing both by those lost in World War II but also against occupation, repression, concentration camps in Gaza, and more….. Our United States is at a moral crossroads.  Who are we and what do we stand for?  These are questions we are being forced to answer. 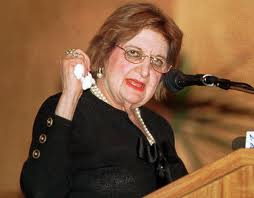 Finally, Ms. Thomas raises some outstanding issues on “occupation” and “imperial” aggression by Americans and Europeans who’ve pushed their way into the lands of Palestine deplacing the peoples there and, in their places, putting them in concentraction camps like HEBRON and GAZA, holed up and locked in like sardines.    Why are their still settlements going on in Palestine?

Moreover, Ms. Thomas said it right, you can call the U.S. President any name in the book, but if you go after Israel, you’re screwed.  That said it all.  And every American should be up in arms about that true statement.  It’s one thing to stand with those lost in World War II but it’s another to serve masters 8000 miles away in a land far far away.

This is America 2011 and I am wondering if my fellow Americans will muster the strength to rid ourselves of this Zionist lobby menance that has inflicted it’s harm on the world and us.  When will this lobbyist dictatorship will fall?   Does anyone hav the phone number of that Wael guy in Egypt who worked for Google and got rid of Mubarek?  Maybe he can come over and help us learn how to topple this lobby dictatoriship.

Or, at least, maybe it’s time for Arab Americans to sign a petition simply calling themselves rightfully, SEMITES and get it signed by the U.S. Congress recognizing the Americans from those lands as Semites so that we can take one of Zionist lobbies immoral and misrepresented marketing tools away from them.

So lets stop to ignorant use of the phrase “You’re an Anti-Semite” made so famous by Uncle Leo on the Seinfeld show.   Funny?  Yes!  Incorrect and harmful, even more so!

So if Zionists have a case, let them present it honestly and without misrepresentation.    I mean we ought to have empathy for those lost in World War II but, in 2011, we must have emapthy for those who are alive and in bondage in Palestine.  That’s moral too!