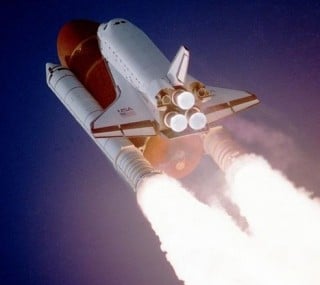 HOUSTON, 2/26/11 — Thursday’s successful Discovery launch was a welcome diversion from a world of a pan-Arab uprising, soaring oil prices and mass labor protests. Because of these problems, Obama’s approval ratings are slipping again. They had spiked upwards nearly 20 points up after his memorial speech for nine-year-old Christina Green and the other victims of the Tuscon shooting.

The slaughter of that innocent was just what Beltway Machiavellis said BO needed to curtail the Bill of Rights and confirm the Homeland State. Classic Liberal published a fine article all but accusing the Kenya Kid of staging the mass murder: Never Let a Good Crisis Go To Waste, http://the-classic-liberal.com/good-crisis-waste/.

At this juncture in Barry’s plan, he could really use yet another “terrible tragedy”, the presidential panacea that has been abundantly available since 9/11. Just consider the space shuttle now circling the world to be a star-wars syringe for administering more terror stimulant to our addicted body politic. After all, it’s been done before, in Congressman Ron Paul’s NASA-dominated home district.

I was a participant, observer and reporter of what occurred on July 28, 2005, two days after Discovery had blasted off in the first shuttle flight since Columbia’s catastrophe 30 months earlier. The BP refinery in Texas City blew up for the third time in a year late that afternoon, as rumors of terrorism flew across the Bayou City.

At dusk began the most awesome spectacle imaginable: An expanding cloud of energy rose up like some nuclear phoenix, growing to a height of 45 miles, and a width of more than 100 miles. These measurements are not guesses: In my first Army enlistment, I was trained by the Chemical Corps to compile and evaluate such data. The article title is not hyped: BP 7/28 Nuke Plan vs. U.S. Officers Coup, http://tinyurl.com/28hfk3p.

In the following days the mainstream media failed to report the story, and all references to it were scrubbed from the internet. Alternative media stars like Alex Jones and John Stadtmiller joined the cover-up, even disposing of previous interviews they had done with me on the likelihood of a Houston false flag attack. They were controlled every bit as much as the network news.

I had meetings with high-ranking Houston Police officers, who had unofficially collaborated with me to alert the public. They agreed with me that what Southeast Texas saw on July 28 looked like a nuke, and coincided with unannounced military exercise simulating a nuke attack. None of them dared to infer what I did, or to join the officers coup.

The survival instinct is a powerful impediment to heroism, and a standing invitation to cowardice. Because we didn’t take care of business in July, we had to go through it again in January: Nuclear attack warning story dismissed, http://galvestondailynews.com/story.lasso?ewcd=966022542546e363.

My European readers will recall that the same day the scrubbed nuke was reported (Feb. 2, 2006) was the day European newspapers enraged Muslims with a blasphemous political cartoon. They were set up to be blamed for the Texas City nuke, and the cartoon was supposed to fuel Christian hatred against Islam.

This month Homeland Security encouraged nuclear foreboding by declaring that we are more likely to be attacked again than at any time since 9/11. Wikileaks has joined the propaganda effort with: Documents Show Jihadists Seek Mass-Destruction Weapons, http://www.israelated.net/node/100859. Texas has just proclaimed the capture of a Saudi student who, they say, meant to attack nuclear powder plants.

All of this makes me suspect that Discovery has a combat mission against us earthbound sitting ducks. The most likely targets are U.S. evacuees from Libya, nuclear power plants and Ron Paul’s district. For art and background on the targeting of Ron Paul, see SPOOK and NUKE, http://tinyurl.com/4gf6k8.

Captain May is a former Army intelligence officer and NBC editorial writer. His recent aticle about official reprisals against veterans updates the nuclear Battle of Baghdad in 2003: Has Obama ordered violence on veterans?, http://www.veteranstoday.com/2011/02/21/eric-may-has-obama-ordered-violence-on-veterans/.