Since when did the Constitution or the Bill of Rights allow free speech to take hostages? That is what we’re talking about when families are forced to listen to a group of hateful people stalking, harassing and intimidating them. Every time there is a military funeral, families have to add in Westboro showing up as a factor in planing the funeral. 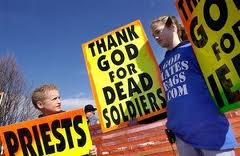 They contact the Patriot Guard Riders for a defensive line between the mourners and the insurgents. While most people want the Westboro haters to just go away, no one is trying to legally stop them from using their rights to speak freely. They are just trying to stop them from harassing families.

The families of the fallen are to be held hostage, forced to listen to these people and read their hateful signs? Is that right? What was the Supreme Court thinking? Why can’t they understand that in forcing the families to put up with Westboro is taking away their rights?

They can say what they want in their own church. They can write whatever hateful thing of the day they want on their website. They can scream, shout, cover their property with all the signs they can find ink enough to print. They can march down the streets with a permit to do it and they can assemble anywhere they want but the fact remains people can find another street to drive down, walk away or have a counter protest across the street from these people. When it is during a funeral, do you think a family should have to make any of those choices? Do you think that while they are preparing to put someone they love into the ground they should be forced to hear Westboro’s words among the last ones they’ll hear before the casket is lowered into the ground?

Between last night and this morning, there have been too many defending the Supreme Court’s ruling that Westboro gets to to it because of their free speech rights but the law suit was not about stopping them. It was only about stopping them from doing wherever they wanted to do it when others were forced to hear them.

By JIM NIEDELMAN
Published: March 02, 2011
JACKSONVILLE, N.C. – Protests at military funerals are allowed under The Constitution.

That’s after the United States Supreme Court ruled in favor of the controversial Westboro Baptist Church. Justices decided 8 to 1 that the protests are protected as free speech under the First Amendment.

Paul Levesque is a Vietnam veteran who fought to protect the First Amendment. However, he says the decision to protect the Westboro Baptist Church goes over the line.

“Every parent who’s burying their son or daughter, who was killed in action, has a right to privacy. And, they do not need to be attacked by some radical group that uses God’s name and Christianity to prove that they can do what they want to do in regards to the First Amendment,” said Vietnam veteran Paul Levesque.

Levesque is also president of a local chapter of the veterans support group, Rolling Thunder. He saw members of the Westboro Baptist Church protest in Jacksonville in 2008.

The group that says military deaths are God’s punishment for tolerating gays vehemently stood by the legal victory.

“You don’t get to use your objective standards to call my religion intentional infliction of emotional distress, otherwise, y’all would have to shut up. So, get off that. The court said get off of it,” said Margie Phelps, member of the Westboro Baptist Church.