1.Women Serving in Combat? It’s Been True For Years.  Hartford Courant To which Tammy Duckworth, of the federal Department of Veteran Affairs, replied she not only could hang tough, but has. Duckworth lost both legs in 2004 in Iraq when the helicopter she was piloting was shot from beneath her.

A new education center at the Vietnam Veterans Memorial on the National Mall in Washington, D.C., moved closer to reality Monday, thanks to the people of Australia.

4.Gates in Kabul to assess progress before July drawdown decisions.  Defense Secretary Robert Gates arrived in Kabul early Monday for a two-day visit to Afghanistan to gauge the success of the U.S. troop surge and NATO’s efforts to build up Afghan security forces, in hopes of determining which U.S. forces could be the first to pull out when the planned withdrawal begins in July.

6.State program to help veterans stop smoking.  Berkshire Eagle  By Amanda Korman, Berkshire Eagle Staff PITTSFIELD — Dick McCarthy knows as well as anyone that veterans have a lot on their plate when they return from overseas. The 64-year-old Vietnam vet, who served as North Adams’ veteran affairs director until

7.Schumer seeks decision on veterans cemetery in region.  Rochester Democrat and Chronicle  “We know the total number of western New York veterans is large. Given that most of our New York state veteran cemeteries are filled, we desperately need a new national veterans cemetery for the men and women who served our country.

8.DLA Distribution supports veterans through work experience program. Through his a local Department of Veterans Affairs office in Harrisburg, Pa. , … and allows veterans to enter temporary positions in federal, state or local … “The Veteran’s Non-Paid Work Experience Program is a great program for all … Times are tough, and we all need a helping hand.”

10.Campaign Aims To Open Doors For The Homeless.  NPR  Just about everyone in San Diego who has anything to do with homelessness is at the table — the police, the housing commission, area hospitals, lawmakers, nonprofits, businesses, even the US Department of Veterans Affairs. “We’re not operating in 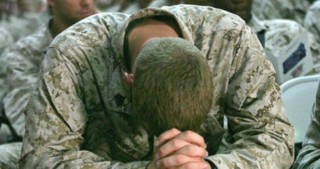 It Takes The Strength of a Warrior To Ask for Help

The journey after military service can be a difficult one. If you are Veteran in crisis or know of one who is, please call our 24/7 Suicide Prevention Line at 1–800–273–TALK (8255) to speak with our trained counselors, or find a Crisis Center near you.