Home Veterans 9/11 Sounds from the Ground 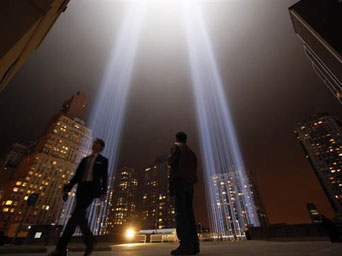 One of the most extraordinary aspects of the entire 9/11 tragedy is the extent to which real-time reports from what came to be known as “Ground Zero” at the World Trade Center of secondary explosions and planted devices disappeared from the public discussion and the record almost immediately, never to resurface in any detail in the mainstream media or the 9/11 Commission Report.

All one heard officially was the tale of 19 Arabs on 4 planes, solely and completely responsible for all of the death & destruction on that day.

This is a ten-minute collection of audio-video clips from the base of the WTC on 9/11 that will forever change the way you think of that event.

It features numerous reporters from different networks, many emergency services personnel, and many survivors describing repeatedly secondary explosions within the two buildings struck by airliners, suspicious devices, an exploding van parked inside one of the buildings, and similar occurrences — all real-time, as they happened on 9/11, and that somehow or other disappeared from the media record shortly afterward.

Proof positive that the impacting planes alone did not bring down the Twin Towers, it is a “must” viewing for any concerned with what actually happened on 9/11.

And inferentially, it is also damning proof that neither 19 named Arabs (none of whom really had the skills to fly passenger jet airliners) nor any of their possible supporters on the ground were responsible for the tragedy that ensued, in particular, the collapse of three buildings at the World Trade Center that day: WTC1 & WTC2 (the “Twin Towers”), and the 47-story WTC7 later that same day.

The only reason the largely Zionist-owned & operated mainstream media would not have trumpeted what you will hear here, and shredded the US Government’s case and thus its rationale for wars and the erosion of our civil liberties, is because they knew, suspected, or feared that the evidentiary trail they would uncover would lead to Israel and its supporters in the US.

Alan Ned Sabrosky (PhD, University of Michigan) is a ten-year US Marine Corps veteran. He served two tours in Vietnam with the 1st Marine Division and is a graduate of the US Army War College. He can be contacted at [email protected]