Home World Gaddafi’s Buying Time: But The Times Have A’Changed

[Orlando, Fl.]–The crowd converged at Lake Eola on 12 March 2011 after the word was spread on Facebook and Twitter to take it to the street in support of the people of Libya and demand a No Fly Zone, which they all began to call for on February 17, 2011 when Gaddafi started using air-strikes to bomb civilians.

After Ahmed Addarrat’s Enough!Gaddafi.com was hacked, he helped co-found feb17.info because of “the black hole of information”

Feb17.info‘s information gatherer’s are all first generation Americans of Libyan descent who seized the Internet to document Gaddafi’s war crimes and petition the American government to support a No-Fly Zone.

Ahmed informed this reporter, “We want to level the playing field and even though the revolutionaries aren’t trained-they’re mostly just kids-they won’t give up! The revolution actually started early on February 15 despite calls for Libya’s ‘day of rage’ to be on February 17.  What happened began in 1996, when Gaddafi’s men mowed down 1,200 political prisoners in a matter of hours.  The spokesmen for the families, Fethi Terbil, a lawyer, was arrested after the families announced they would end all negotiations with the regime involving resolving the issue. The families immediately headed to the security building in Benghazi where he was being held and demanded his release. Supporters from around the city quickly met them and the demonstration quickly became larger and larger and it caught the regime by surprise.”

Just hours prior to the Orlando demonstration, the Arab League released a statement asking “the United Nations to carry out its responsibility to impose a no-fly zone over Libya.”

Everyone I spoke to in the crowd agreed they were relieved over that announcement and they all chanted, “Obama don’t you know: Gaddafi has got to go! Our blood, our tears, for more than 40 years! Hey, hey, ho, ho, Gaddafi must go Libya will be free from Benghazi to Tripoli!”

The Arab League is a 22-member organization but they cannot impose a no-fly zone, but their approval gives the U.S. and other Western powers the crucial regional backing needed by the revolutionaries who are dying to oust Gaddafi.

In this PBS report, Jonathan Rugman states, “These were the graves of rebels who died fighting in what had been renamed Martyr’s Square. But look at those graves today. One man told us the bodies had been removed with bulldozers. If that’s true, that could be a war crime by Gaddafi’s supporters. When I was here on Sunday, I counted the graves of 20 people buried right here who had been killed in the fighting. Now those graves have been completely eradicated.”

Two of the organizers of the Orlando event, Wafia Sayf Al Nasr and Asmaa Elmani informed this reporter that Gaddafi also considers the Libyan Diaspora to be “traitors” and Asmaa added, “Anyone who kills his own people may not deserve to be called human.” 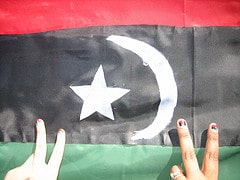 The two women founded Shirts for Libya to help raise funds and awareness for the current situation in Libya, with all donations going to Hope International for current and long term assistance of the Libyan people. www.hoperelief.org .

Jamal Naas and his four children all raised the Libyan flag and the Naas men also wore it on their heads:

Jamal said, “I moved from Libya in 1978 to America as a student because of the oppression and mass killings that have made 42 years of hell for Libyans who are starving for freedom and democracy. All the people of the Middle East should be able to live like Americans, but everybody in the world has kept closed eyes because of the oil. The only difference between Hitler and Gaddafi is Hitler is dead. The American citizens have good hearts but dirty politicians have kept them in the dark.”

Gaddafi seized power in 1969 and has ruled Libya with an iron fist ever since. President Ronald Reagan called him the “mad dog of the Middle East” for his involvement in financing terrorist plots outside of his country; but the West began lifting economic sanctions on his government in 2004, following his decision to renounce unconventional weapons and cooperate with the United States in the fight against Al Qaeda.

That led to a flood of Western investment in Libyan oil and natural gas industries, and access to international oil and financial markets. 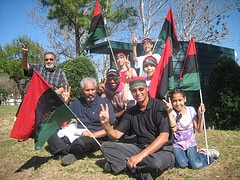 The New York Times reported that Gaddafi “likely has tens of billions in cash secretly hidden away in Tripoli, allowing him to prolong his fight against rebel forces despite an international freeze on many of the Libyan government’s assets, according to American and other intelligence officials.” [1]

The United States has so far frozen nearly $32 billion of Libya’s assets, according to Treasury Department officials-but that action have been limited to funds in the international banking system and to business investments outside of Libya, and Gaddafi has amassed a huge rainy day fund of cash.

“Kenneth Barden, a lawyer who specializes in Middle East financing and advises financial institutions on ways to guard against money laundering, said there were indications that Colonel Qaddafi had moved billions of dollars in assets just days or weeks before the outbreak of violence in Tripoli, apparently to protect his family wealth from global sanctions. 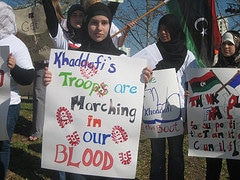 “The money that is kept in Qaddafi’s name is probably small,” Mr. Barden said, “but he’s got a lot in the names of family members and close associates.” [Ibid]

Gaddafi is busy spending his pile of cash in payments to political supporters in Tripoli and buying the services of African mercenaries.

“The person close to the government estimated that 3,000 to 4,000 mercenaries from Mali, Niger and a rebel group operating in Darfur, Sudan, the Justice and Equality Movement, have been hired by the Libyan government for at least $1,000 a day apiece.” [Ibid]

Nizar Abboud, a correspondent with the Lebanese daily Al Akhbar, reported that a son of Kadaffi had visited occupied Palestine on March 4, 2011, “to solicit for help. During his visit Saif el Islam has asked high placed Zionist officials for military assistance in terms of ammunition, night surveillance and satellite surveillance, trying to develop political and economic relations between the two countries.

“He also asked the Zionists to use their credit with the USA to protect the funds invested by his family, offering part of the profits. Saif el 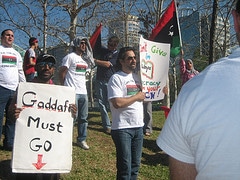 Islam maintains- for a long time already- narrow relations with the Zionist entity, and we have not forgotten how he used, since the beginning of the Libyan revolution, services from a famous Zionist ‘security’ firm. This firm has furnished mercenaries from Chad and elsewhere, making huge profits-Kadaffi has been willing to pay salaries of 1000 to 2000 dollars a day.” [2]

“It should come as no surprise that Saif al-Islam, son of Colonel Muammar Gaddafi made a surprise visit to Israel last week to buy more weapons for his dad. Is this why the US is so reluctant to impose a no fly zone and wants to the UN to decide? Shame they did not do the same in Iraq.

“Yediot Aharonot revealed that Saif al-Islam asked senior leaders for military assistance with munitions and night observation devices, as well as satellite imagery, and in turn, pledged to develop ties between Tripoli and Tel Aviv … in the fields of political and economic development.”

That article only appeared in Hebrew, but Rev. Sizer elaborated his source also reported: 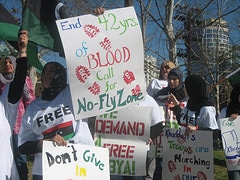 “The English translation is not very good but the content is shocking. The newspaper said that according to the Hebrew source of other Libyan spoke to Arab media outlets, the relationship between Saif al-Islam and Israel has evolved considerably during the current crisis came amid reports that Israeli security firms active in Chad and the recruitment of mercenaries sent to Libya unrealized gains billions of dollars.

“Yediot revealed that Saif al-Islam asked senior leaders in Israeli security military assistance munitions and night observation devices, as well as satellite imagery, and in turn, pledged to develop ties between Tripoli and Tel Aviv or what may remain of them under his authority with Israel in the fields of political and economic development.

“In another context, had been sources for the Libyan opposition’s newspaper Al Rai Kuwait that a group of Israeli experts arrived in Libya on a plane large private landed at the airport, ‘walked’ a few days ago to help the regime of Colonel Muammar Gaddafi to regain the initiative in the field against the Revolution overwhelming that the country has seen.”

It was a Palestinian America, Dr. Khaled Diab -the inspiration for my first book-KEEP HOPE ALIVE 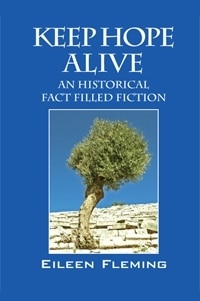 Who nailed it, “The rebellions that have been raging in the Middle East are largely a result the new technology that made access to information very easy. It is not only oppression that causes rebellions; it is the knowledge of deprivation and the rights of the people. This combination brings unstoppable rebellions.”

About the Author: Eileen Fleming, is a Citizen of Conscience for House of Representatives, founder of WeAreWideAwake.org, Staff Member of Salem-news.com, a Feature Correspondent for Arabisto.com, Producer “30 Minutes with Vanunu” and “13 Minutes with Vanunu” and Author of “Keep Hope Alive” and “Memoirs of a Nice Irish American ‘Girl’s’ Life in Occupied Territory” and  BEYOND NUCLEAR: Mordechai Vanunu’s FREEDOM of SPEECH Trial and My Life as a Muckraker: 2005-2010

In Solidarity YES WE CAN begin the world again.