Home World Stay Out of Libya

Our Rubik’s Cube and Libya 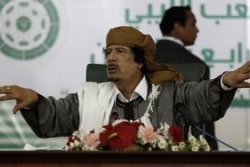 Moammar Gadhafi seized power in Libya in 1969, only five years before a Hungarian sculptor invented a frustrating yet obsessively fascinating toy that came to be known as Rubik’s cube. The United States should resist the calls for military intervention in a tinderbox that outside force might cause to explode. If we tinker with this cube it may not only lead to a wider civil war, a danger already being discussed, but it will be certain to inflame opinion in North Africa and the Mid-East. America is widely hated around the world, particularly by Muslims, because of its penchant for applying force to whatever issues it chooses to define as national security threats, or even social problems. Academics and intellectuals, along with our rulers in various Washington agencies, celebrate “cultural diversity,” except when they don’t like it. Thus we justify our continued presence in Afghanistan in part because of what to our western eyes is abuse of women and girls by some devout believers. And we support some dictators, but not others, because they promise to help us fight the Taliban or Al Qaeda, or simply because they sit on an ocean of oil. Libya’s ruler is not one of our preferred dictators. His nation has more energy resources than any other African country, but most of it is sold to the European Union. Perhaps France or some other bold and heroic power will step in because of its national interest. America’s, for the moment, is not seriously threatened by the madman in Tripoli. It is frustrating for Americans, and particularly the power elite in our government, to be faced with a situation about which we can do little or nothing, such as human rights in China. It may be even more irritating when a world event demands attention, but the right course of action is unclear for what we like to call the only global superpower. The crisis in Libya presents opportunities and great hazards. Should we wait or act, and if the latter how and when? Each possible decision may have several quite different outcomes, depending on a variety of interlocking factors. The squares you turn on the cube turn others. How do we define a successful intervention, and how possible is it to predict the likelihood of success? What would be the goal of intervention, and how will success be defined? No one knows the answers to these questions, not even the most informed in our government. Watchful waiting, and being prepared for a range of scenarios, is better than sending in the Marines

About the Writer: Michael B. Chesson earned a Ph.D. in history from Harvard in 1978, and has been a college and university teacher for thirty-three years. He is currently the Founding Professor and Dean of the American College of History and Legal Studies in Salem, New Hampshire. Dr. Chesson retired from the U. S. Navy as a captain after thirty-five years of active duty and reserve service. )