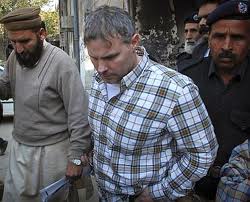 BREAKING!  VIOLENT DEMONSTRATIONS IN FRONT OF US CONSULATE IN LAHORE.  DAVIS FLOWN BY HELICOPTER TO PRIVATE PLANE, THEN TO BAGRAM FOR DEBRIEFING.

CIA contractor Raymond Davis was released by Punjab officials after a reported deal was negotiated with the families of the two men he was accused of murdering.  Davis was scheduled to be indicted for murder charges today.  Security forces picked up the families last night.

In direct contradiction to news stories, the payment of “Blood Money” under Sharia law is an admission of guilt and, by western standards represents a conviction.

Former Minister of Religion for Pakistan, Ijazul Haq, called the decision by the United States “inconsistent with America’s rejection of Sharia law and an open admission that claims of “diplomatic privilege” were knowingly false.  Pakistan’s foreign minister, Shah Mehmood Querishi resigned his post on February 16 in protest, based on American demands that he falsify Raymond Davis’ visa status from “business” to “diplomatic.”

Despite the late hour, spontaneous demonstrations have materialized around Pakistan.  The US Consulate in Lahore is the scene tonight of violent clashes between police and anti-American demonstrators.  More demonstrations are planned for tomorrow as political parties vie for credibility in light of the public outrage at Davis’ release.

A payment estimated a $2 million was made to secure the release.  The families are still in police custody.  Davis is now at an undisclosed location, rumored to be Bagram Air Force Base in Kabul.

Imran Khan, Pakistan’s “rock star” political leader and philanthropist expressed deep concerns.  “This is a gift for Islamic radicals and will incite, not only waves of hatred toward the United States but an upsurge in terrorism as well.”

Press stories are largely inaccurate and incomplete.  This is what actually happened according to high ranking sources in the Punjab police and government officials who wish to remain anonymous.

Tonight, Afzal, the uncle of Shumaila, the widow of one of the slain men who had committed suicide, went on Pakistani television.  He told the audience, moments ago:

Family members were told they were being taken to the police station to make statements.  Instead, they were taken to a secret location and held in isolation and told that unless they signed a letter pardoning Davis, “you will never see daylight.”

Ijazul Haq, Pakistan’s former Minister of Religion and son of former Prime Minister Zia al Haq reports, in a VT exclusive, that members of the family and others involved, were given US citizenship to protect them from reprisals.

Senator John Kerry flew to Pakistan on February 16, 2011.  He met with Punjab’s ruling duo, Chief Minister Shahbaz Sharif and his brother Nawaz Sharif, heads of the PML, Pakistan Muslim League. Kerry announced that the release would

occur in a few days, although families refused to meet with him.

Shah Mahmood Qureshi, the former Foreign Minister resigned in protest but refused to grant diplomatic immunity to a criminal and a terrorist Raymond Davis. Today in press conference Qureshi said with pride that he stands vindicated for his decision.

Rana Sanaullah the Punjab Law Minister played the lead role.  Sources in Pakistan indicate that government and police officials in Punjab received millions in CIA payoffs in the deal.

Both PML leaders, the brothers Shahbaz and Nawaz Sharif, left Pakistan for London earlier this week, making sure they were out of the country after brokering the deal.