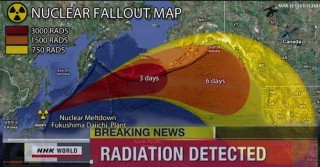 HOUSTON, 3/18/11 — One week after the earthquake, tsunami and nuclear disaster of 3/11/11, the pieces on the global chessboard have become clearer, and it’s apparent that the sane world is in check. We witness a shattered Japan, a ruined nuclear power industry and a highly fortunate Big Oil.

The worldwide economic impact of the triple-evil event could reach a trillion dollars, with countless fortunes to be lost or won, depending on  whether you’re ignoant or informed. No doubt the disaster capitalists will turn the carnage into cash. That’s how all war cabals have prospered, from the Carpetbaggers back to the Carthagenians.

While mainstream society focused on Fukushima, the Imperial West prepared to leap into the Libyan civil strife, intent on control of the country’s oil. Our quicksand wars are pulling us in deeper, while most of our compatriots are unawake and unaware. My view of events is utterly dark, and easily detailed under the four four-letter N-words in the title.

NASA is as guiltily as sin in the earthquakes of 3/9/11 and 3/11/11, as HAARP monitors demonstrate. The Gabrielle Giffords story is a parable code for the successful mayhem mission, appearing just after the tsunami. My analysis raises questions demanding answers. NASA assassinates a shuttle contractor to discourage Discovery discussion.

NATO began its escalation to war in full knowledge that the unpopular plan would be off the public radar. Wednesday they practiced worldwide round-ups, which one day will target pesky internet intellectuals like thee and me. Thursday the alliance got the UN green light for war.

NOZI is an anagram of ZION, and is analogous to the more explicit word ZIONAZI. Just use NOZI the same way you would use NAZI, and you will find that the word is both elucidating and emancipating.

The day before the tsunami, the Nozis used goy boy “King Peter” to repeat their post-9/11 blood libels against Muslims. Concurrently, they opened a holocaust museum to show themselves to be the most pitiable people on earth. Two days after the tsunami they made it clear that they are endangered, never mind the Japanese, and they must take swift action against the anti-Semitic world. CNN spent a week trumpeting an interview with the Israeli prime minister, which was broadcast across America just a couple of hours after the UN gave NATO the go-ahead. It’s no surprise that the interview was so well-timed; what is surprising, though, is that the interviewer was so candid in face of Bibi’s BS.

NUKE woes were foretold by a 3/10/11 signal story. CNN ran the Hiroshima motif on 3/14/11 — half a day after we had anticipated them at VT with The New Hiroshima. Germany’s Die Welt ran a revealing examination of the political fallout from Japan’s nuclear crisis. Today the Japanese victim is appealing to its American victimizer for help. History repeats itself: we have subjugated the land of the rising sun by nuking it.

NOTE well that Sunday, 3/20/11, will be the eighth anniversary of our invasion of Iraq. Monday a weeklong international terror exercise will be conducted out of Fort Leavenworth, Kansas. This week the Kenya Kid predicted that Kansas would win the NCAA basketball championship, in what may have been another coded story.