It is possible that when they circumcised Alan Dershowitz, they binned the wrong bit. Following the recent devastating chain of nuclear disasters in Japan, the lame Zionist advocate has managed to draw the most astonishing conclusion: “Israel Has the Right to Attack Iran’s Nuclear Reactors Now”

Here is Dershowitz’ fascinating, logical, algorithm for us to consider:

1. “The recent disaster in Japan has shown the world the extraordinary dangers posed by nuclear radiation”

2. “If Iran were to develop nuclear weapons, the next ship destined to Gaza might contain a nuclear dirty bomb”

3 “A dirty bomb detonated in tiny Israel would cause incalculable damage to civilian life.” 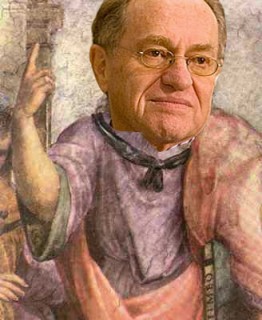 Dershowitz is obviously a complete ignorant — a ‘nuclear dirty bomb’ is not exactly something you blithely throw over the fence onto your next-door neighbour: the Palestinians in Gaza do not need a ‘dirty bomb,’ and have never expressed any desire to have one. All they want is their land back. And they would be the last to radioactively contaminate their beloved soil.

However, unlike the Jewish state that possesses hundreds of nuclear bombs and have also been using WMD against civilians, no one has managed to prove that Iran plans to produce an atomic bomb, or any other weapons of mass destruction. [1]

“Israel” says Dershowitz,   “has the right to prevent its civilians from being murdered by Iranian weapons, especially weapons of mass destruction.”

Yet, if Dershowitz’ logic is valid and consistent, then surely every Arab and Muslim country in the world should also have  the right to prevent its own civilians from being murdered by Israel’s  weapons of mass destruction.

If Dershowitz is correct, the Jewish state would have ‘no legal standing to protest a surgical attack on its nuclear facilities’, for Israel is a volatile nuclear super power that so far has refused to sign any non-proliferation of nuclear weapons treaty.

In his absurd piece, war enthusiast Dershowitz pretends to present reasonable argument: he says “this is not to say that Israel should attack Iran’s nuclear reactors now. That it has the right to do so does not mean that it should not wait for a more opportune time …But under no circumstances should the military option ever be taken off the table. Israel must preserve its ability to exercise its fundamental right of preventive self defense.”

And what about the rest of us Mr. Dershowitz? Do we also have the right of ‘self-defense’?

I think that the message is clear. The time is ripe to defend the rest of humanity from the Jewish State and its poisonous messengers. Zionist advocates like Dershowitz should, once and for all, be seen for what they really are, and rejected by our society and academia.

Similarly, Israel must be stripped of its nuclear capacity and military might. The Jewish state must be dismantled, before it is too late.

And a No Fly Zone over Gaza and the West Bank is long overdue.

[1] In the past I expressed the idea that an Iranian bomb would  be a desirable step towards peace. It could only deter Israel from celebrating its murderous symptoms.