Home World Libya Attack Is A Show Of Farce 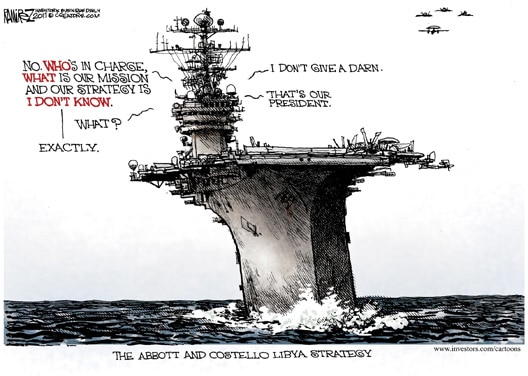 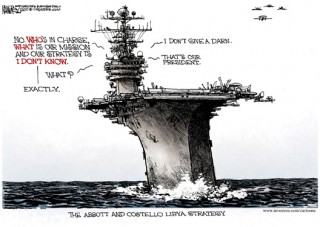 Obama’s show of force in Libya is actually a show of farce whereas no one seems to know whose in charge, what’s the mission and just what is the strategy ~ which leaves only two possible answers for this Abbott and Costello routine ~ Regime Change and Politics: Allen L Roland

Let’s get something straight ~ The United State’s recent preemptive attack on Libya, while flying the flag of NATO, is all about Regime Change under the guise of a Humanitarian intervention. Certainly there was no real attempt to negotiate with Gaddafi ~ like Iraq, the decision was made to attack and events were tailored to justify this action. This is the ongoing formula for western imperialistic change you can believe in ~ particularly if the natives are getting restless.

NATO Secretary General Anders Fogh Rasmussen announced on Thursday that the U.S. will turn over command of the no-fly zone but will retain control of the ground attacks. Since there is no effective Libya air force ~ that means that the U.S. is still in charge and most likely is already in the process of providing advisors for the Libya ground rebel forces. NATO’s normal command procedure is to have a U.S. officer in charge and that still appears to be the case. President Obama has already said he wants Gadhafi gone so the whole question of whose in charge is mute ~ Obama is in charge but he doesn’t want to advertise that truth since he does not have Congressional approval and he most certainly does not have a mandate for regime change from the UN.

Obama is already teetering on a tight rope of obvious hypocrisy but he has taken a dramatic politically revealing step, with this decision, of being the titular voice of the New World order which could care less about American congressional approval and uses the UN and NATO to justify its illegal preemptive and self serving military and financial imperialistic interventions.

During the first four days of this imperialist assault, more than 160 Tomahawk cruise missiles were fired from U.S. and British naval vessels in the Mediterranean, and more than 150 sorties were flown by U.S. Air Force B-2 stealth bombers, F-15 fighter jets, Marine Harrier jets, as well as French and British warplanes. Please take note of what has been unleashed by our Nobel Laureate Peace prize winner president Obama when he attacked Libya ~ courtesy of David Watson, Stop The War Coalition~ “ In the first 24 hours of the Libyan attack, US B-2s dropped forty-five 2,000-pound bombs. These massive bombs, along with the Cruise missiles launched from British and French planes and ships, all contained depleted uranium (DU) warheads. DU is the waste product from the process of enriching uranium ore. It is used in nuclear weapons and reactors. Because it is a very heavy substance, 1.7 times denser than lead, it is highly valued by the military for its ability to punch through armored vehicles and buildings … An impacting DU missile burns at 10,000 degrees C. When it strikes a target, 30% fragments into shrapnel. The remaining 70% vaporizes into three highly-toxic oxides, including uranium oxide. This black dust remains suspended in the air and, according to wind and weather, can travel over great distances. If you think Iraq and Libya are far away, remember that radiation from Chernobyl reached Wales…Once the dust has vaporized, don’t expect the problem to go away soon. As an alpha particle emitter, DU has a half life of 4.5 billion years… In the ‘shock and awe’ attack on Iraq, more than 1,500 bombs and missiles were dropped on Baghdad alone. Seymour Hersh has claimed that the US Third Marine Aircraft Wing alone dropped more than “five hundred thousand tons of ordnance”. All of it DU-tipped “.

President Obama obviously does not want to take responsible for this radioactive carnage so we have a NATO cover for an illegal regime change under the guise of humanitarian crisis and intervention. But the NATO shield appears to be fragmenting before our eyes ~ On March 23rd; The Daily Mail revealed Deep divisions between allied forces worsened as the German military announced it was pulling forces out of NATO over continued disagreement on who will lead the campaign. A German military spokesman said it was recalling two frigates and AWACS surveillance plane crews from the Mediterranean, after fears they would be drawn into the conflict if NATO takes over control from the U.S. A war of words erupted between the U.S. and Britain after the U.K. government claimed Muammar Gaddafi is a legitimate target for assassination. U.K. government officials said killing the Libyan leader would be legal if it prevented civilian deaths as laid out in a U.N. resolution. But U.S. defense secretary Robert Gates hit back at the suggestion, saying it would be ‘unwise’ to target the Libyan leader adding cryptically that the bombing campaign should stick to the ‘U.N. mandate’. Read more:

The politics are obvious ~ Obama does not want to appear politically weak during a re-election bid and what better method than another preemptive war to stir the patriots and keep his military-Industrial funding complex happy ~ and all under the banner of a humanitarian intervention.

Bob Herbert, retiring NY Times columnist, adds his frustration with these words ~ “So here we are pouring shiploads of cash into yet another war, this time in Libya, while simultaneously demolishing school budgets, closing libraries, laying off teachers and police officers, and generally letting the bottom fall out of the quality of life here at home…Arthur Miller, echoing the poet Archibald MacLeish, liked to say that the essence of America was its promises. That was a long time ago. Limitless greed, unrestrained corporate power and a ferocious addiction to foreign oil have led us to an era of perpetual war and economic decline. Young people today are staring at a future in which they will be less well off than their elders, a reversal of fortune that should send a shudder through everyone.” See article ~

Gerald Celente sums up this Libya show of farce with this short video interview where he asks the pertinent question ~ Would the United States be involved with Iraq and now Libya if its principle export product was broccoli? Instead of Libya’s sweetest and most inexpensive crude oil?  Six minute video

If you’re not angry, you’re on life support.

About the Author: Allen L Roland is a Freelance Alternative Press Online columnist and psychotherapist. Allen is also available for comments, interviews, speaking engagements and private consultations. Dr. Roland is a practicing psychotherapist, author and lecturer who also shares a daily political and social commentary on his weblog and website www.allenroland.com He also guest hosts a monthly national radio show TRUTHTALK on www.conscioustalk.net