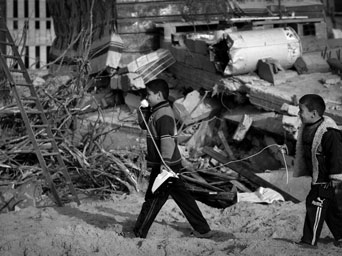 Far too often, what is not said, or cannot be said, publicly is more significant than the platitudes bandied about by assorted political leaders and pundits. Nowhere is this more apparent than in the ongoing Palestinian-Israeli matrix of death and disinformation.

President Obama in particular acts as if he were mesmerized by all this. He has all the power, but acts as if he were powerless. He can make things happen if he chooses to exert himself, yet has ended up positioning himself as a supplicant to Israel and pretending ignorance of Palestinian realities. He thinks and speaks, but does nothing of substance that Israel does not want him to do.

So let us look at those uncomfortable truths, politically unspeakable at least in the US but not necessarily elsewhere, and frequently discussed openly in many non-governmental forums, just so we all appreciate where we stand:

1.       Gaza, Mr. Obama, Gaza. It holds three-fourths of the Palestinians under a government that electorally beat the faction that supports that Israeli puppet you call the Palestinian Authority. Deal with Gaza, deal with Hamas who governs there, or forget it: you are not dealing with Palestinians. You have got to know this. Why be in denial?

2.       There is no two-state solution, and never has been one, so long as Israel held US support in its political palm. Look at the maps of the West Bank and East Jerusalem, look at the Israeli settlements and Israeli military protection for them in place, and the Wall – the Wall, Mr. President, longer & higher than the now-defunct Berlin Wall – and embattled Gaza. Just where and how do you think you will find a Palestinian state acceptable to Israel that has even a shred of the trappings of legitimacy and sovereignty that the now-defunct Bantustans had in apartheid-era South Africa?

3.       The settlements are critical, and you, Mr. Obama, come across as a failure or a Zionist tool, or both together. Does projecting this image please you? And if you did not have the balls to force a halt to Israeli settlement expansion, much less the creation of new settlements, how do you expect to find the courage to dictate the removal of those settlements, without which there is no Palestinian entity of any kind in the West Bank, alone or not?

4.       You can be pro-peace or pro-Israel, but not both together, and all of the rhetoric to the contrary, all of the money AIPAC and its confederates spend on Capitol Hill and elsewhere, all of the media attention Israel commands, cannot alter this essential reality. Why do you persist in playing to AIPAC, J Street, and the rest of the Hasbara crew, avowed or not?

And you, Mr. President, few of your predecessors have come into office with such high expectations and high hopes, and seen them squandered in such a short time. None of your predecessors since Carter signaled a willingness to view the Middle East through something other than an Israeli prism, and even Carter lacked John Kennedy’s willingness to stand up to Israel. Your speech in Cairo signaled a stance on this issue in the tradition of Kennedy and Carter, and it went nowhere at all.

I understand the constraints, dealing with a Congress that does not now seem to contain a single person in either party in either House willing to stand up to the Jewish lobby. But are you so blind, so ignorant, so lacking in courage that you cannot and will not go directly to the American people? Do you like being cast as a laughing-stock and a weakling in public by Israel and its supporters? Do you like being an “Uncle Tom” to the Zionists?

Now, I do not care greatly for Obama as a person, nor anything at all for his domestic political agenda, but appearances notwithstanding, it would be wrong to dismiss him as simply a fool or a puppet. A fool or a puppet would never have made the Cairo speech two years ago in the first place. No politician anywhere enjoys taking the lead, and then looking behind, finding no one in support and clouds of criticism, and then having to back down from so public a stance. The egos of the breed cry out against such exercises in futility.

The same applies in part to some in his Administration, and to others, I suspect, in the Congress. Those who are Jewish, especially with dual Israeli citizenship, need no prompting to follow the Zionist agenda; that agenda is their agenda, heart and mind. The so-called Christian Zionists, mostly evangelical Protestants, are much the same, although for very different theological reasons, some of which ought to make Jewish Zionists more than a little nervous. And there are those in this and previous Administrations who have made their own Faustian bargain with AIPAC and its cohorts in the service of their own ambition.

But there are many in both houses of the Congress, and more within the armed services and the bureaucracy, who do not fit comfortably into any of these categories. Those in the Congress in particular have been bribed, blackmailed or bullied into submission, servility or silence, and few if any can be happy with their situation. Most simply make the best of an uncomfortable bargain, trading their own continuation or advancement in office for their support of Israeli ambitions, and their silence when confronted by Israeli crimes.

Yet this is a potential weakness in the edifice of Zionist influence and control in the US, and it should and must be our task to focus on that political battlefield, and not simply shuttle trucks and ships toward Gaza in the hope that some will get through the Israeli blockade. The remainder of the series that follows, Palestine and the United States: A Battle Lost, A War to Win, which has been completed and will be published in the coming weeks, is one attempt to define the parameters of a strategy to do precisely that. Executed properly, it and others like it may be a first step toward the saving of both the United States and Palestine.

Alan Sabrosky (Ph.D, University of Michigan) is a ten-year US Marine Corps veteran and a graduate of the US Army War College.