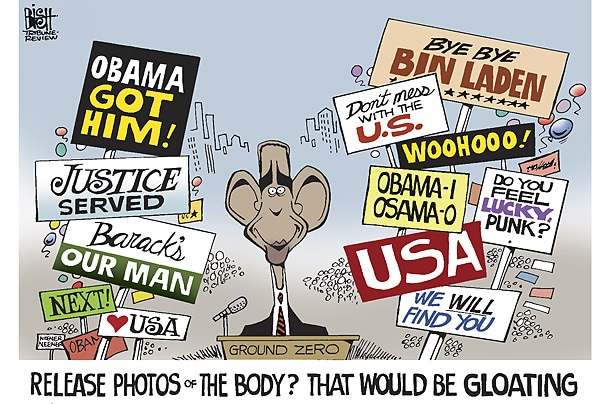 President Barack Obama’s refusal to release photos and DNA of his supposed assassination of a questionably alive Bin Laden spanks of his trademark lack of transparency except when it is politically expedient ~ but it is also step three in Myth making as Obama kicks off  his re-election campaign which is designed for the sheeple : Allen L Roland

The Obama hyped Bin Laden assassination myth is riddled with so many inaccuracies that it’s being openly mocked on the internet such as in this supposedly secret footage released from the Osama raid  Video: 30 seconds

Myth making is relatively simple when your target audience is sheeple who are more than willing to accept the administration’s deceits and fabrications ~ for to do otherwise would personally be deeply humiliating. Here is the typical myth making four step process;

But the Bin Laden raid story continues to rapidly unravel as many eye witnesses question the official Obama report. Here’s the latest ~ according to Gordon Duff, Senior editor of Veteran’s Today: Bin Laden Raid Operation Was Not Successful – Eye Witness Claims: A Pakistan news agency reports that the bin Laden raid on Abbottabad was aborted because of a helicopter crash which killed several passengers, believed to be Pashtu speaking Americans. See story ~

The term Sheeple is often used to denote persons who voluntarily acquiesce to a perceived authority figure’s suggestion without critical analysis or sufficient research to understand the ramifications of that decision. By doing so, Sheeple undermine their own individuality and may willingly give up their rights. The implication of the term is that people fallaciously appeal to authority and believe or do what they are told by perceived authority figures who they view as trustworthy. The term is generally used in a political, social, and sometimes spiritual sense.

In other words, It’s taking the blue pill of eternal unquestioned government allegiance or bondage and submitting to authority versus the red pill of critical thinking, individuality and searching for the truth. Morpheus explains it all to Neo in the Matrix ~ “Neo, Like everyone else, you were born into bondage, born inside a prison that you cannot smell, taste, or touch. A prison for your mind. Unfortunately, no one can be told what the Matrix is. You have to see it for yourself. ” The Matrix (1999) Four minute video

Are you a sheeple? Let’s find out !

Have you heard about the Sheeple Quiz? Although most of my readers will easily beat it, it’s a fun quiz to find out how smart (or gullible) your friends really are. So let ’em take the Sheeple Quiz! And then you’ll know whether they’re independent thinkers or just zombie-minded sheeple like the rest of the flock.

Here’s the quiz. Choose “A” or “B” as the answer for each question, then check your score below.

#1) The purpose of the mainstream media is to:

A) Keep you informed.
B) Feed you misinformation while keeping you distracted from the real issues our world is facing.

A) A financial safety net that makes sure people have a retirement income.
B) A government-run Ponzi scheme that requires more and more people to keep paying in just to stay afloat and will ultimately collapse into total bankruptcy.

#3) The fluoride dripped into municipal water supplies is:

A) A naturally-occurring mineral.
B) An industrial chemical waste byproduct.

#4) When you donate money to find the cure for cancer, that money goes:

A) To fund research programs that assess actual cancer cures for the purpose of freely sharing them with the public.
B) To fund mammogram campaigns that actually irradiate women’s breasts, causing the very cancers that earn huge profits for the cancer treatment industry.

A) Feed the world and prevent starvation.
B) Threaten the future of life on our planet through genetic contamination and widespread crop failures.

A) The people from dangerous medicines.
B) The financial interests of the drug companies.

#9) The Federal Reserve functions to:

#10) The purpose of TSA checkpoints at airports is to:

A) Keep air passengers safe and secure.
B) Indoctrinate Americans into surrendering to police state invasions of their privacy.

#11) The practical function of the U.S. Supreme Court is to:

A) Protect the constitutional rights of the citizens.
B) Legitimize federal tyranny over the People by ignoring the Constitution and its Bill of Rights.

A) Gold standard science that conclusively proves their safety and effectiveness.
B) Quackery and fraud combined with a persistent medical mythology that utterly lacks a factual basis.

A) Are medically useless and cannot treat, prevent or cure any disease.
B) Contain powerful plant-based medicines that can help reverse and prevent disease.

#14) In Libya, Afghanistan and Iraq, America:

A) Led a humanitarian effort to save innocent people from tyranny.
B) Waged an illegal imperialist war to occupy foreign nations and control their oil.

You are a total news-watching, gullible fairytale swallowing Sheeple! Be sure to keep taking those medications and watching more network news. Don’t bother thinking for yourself because you seem to be incapable of accomplishing that. You’ve already swallowed the Blue pill.

If you answered “A” fewer than 10 times…

You are sadly Sheeple-minded but there is hope for your rescue. Learn more about the world around you and train yourself to think critically so you can depart from the herd mentality.

If you answered “A” fewer than 5 times…

You are an unusually intelligent free-minded thinker who questions the world around you and doesn’t buy into the usual propaganda. You still got suckered on a few items, so there’s more yet to learn. But you’re on the right track!

If you answered “A” exactly zero times… you swallowed the Red pill.

You are the complete opposite of a Sheeple. You’re independent minded, well informed and probably a regular reader of mine. Stay on track and question events in the world around you. Keep reading the alternative press and voice your intelligent views to others willing to listen. (But don’t waste your time on those who aren’t.) Learn more:

In other words, take the Red pill!

Allen L Roland is a practicing psychotherapist, author and lecturer who also shares a daily political and social commentary on his web log and website allenroland.com He also guest hosts a monthly national radio show TRUTHTALK on www.conscioustalk.net