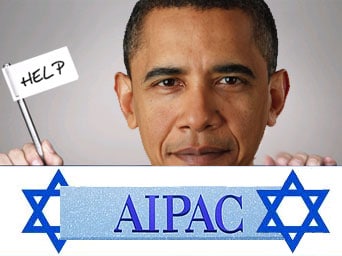 As was expected President Barack Obama’s speech this weekend at AIPAC was an unconditional surrender to AIPAC, to Bibi Netanyahu and Israel. He gave up the US presidency in favor of his candidacy for re-election.

Barak Obama did not come to AIPAC to convince the American Jewish leaders and community and argue the case of the US resolve and leadership in settling the Middle East conflict based on international laws and international conventions, a conflict that has cost the US and its tax payers so dearly.

Barack Obama came to convince his friends and sponsors within the American Jewish community he is their candidate and their man in the White House now and in the future, and the only way he can convince such a group is to submit his presidency and the US total and unconditional surrender. He surrendered the US world leadership and prestige coming close to declaring his allegiance to Israel and ahead of the US like so many in the US Congress.

Few days before Bibi Netanyahu came to the White House not to listen but to dictate, and came to the White House to tell the man of the White House, when it comes to Congress, he (Bibi) is the “Boss” and Bibi has what it takes to make the re-election of Obama an impossible task.  Bibi enjoys so much wide spread support among the American Knesset and the Jewish community and the Evangelical Christians Rights, support he does not enjoy in his home country of Israel.

Barack Obama had to be careful in what he says, let alone what he does since the coming months are so critical to his reelection and campaign financing. He could not alienate the most powerful community and group in the US, a group that makes or break the hopes and dreams of any political candidate.  They promise money in return for blood and total unconditional surrender of the US in support of Israel’s agenda, its wars, its settlements, its nuclear weapons and its constant violations of international laws.

He spoke of the borders of 67 yet in the next statement he spoke of “facts on the grounds” facts that were there in violation of international laws, in violation of US laws and in violations of the Geneva Convention. The “Demographic” changes he mentions were deliberate acts of aggression resulting in so much land and water theft and resulting in the “expulsion and ethnic cleansing” and denial of residency for hundreds of thousands of Palestinians, an expulsion denial of rights that comes close to the 700,000 Palestinians who were forced to exile by the power of gun in 48.

Since 67 Israel took “Jewish legal” measure to expropriate land and ethnically cleanse people with the support of the very power gun and money supplied by the US and a legal and political cover the US only the US is always ready to provide.

Obama of 2011 was no different from Obama of 2008 when he spoke of unconditional support of Israel at AIPAC -08 where he promised ”Jerusalem” to remain the undivided capital of Israel now he is promising half of what remains of historic Palestine.

Mr. Obama even went further, by making sure the US will do all it can to bock any efforts by the PLO to bring the issue of “recognition” before the United Nation, not that the UN vote will end the Jewish Occupation of 43 years, or enforce the Rights of Return or the rights to East Jerusalem, but the very idea that the US will block and discourage such efforts goes beyond the total surrender of the US and Palestinians to Israel.

Obama even threw the American Jewish community as part of the deal.  He surrendered this “community” accepting its loyalty and commitment to Israel as the state of the “Jewish People”.  By recognizing and accepting Israel’s demands that Israel as state for “the Jewish People” he ceded the rights of US citizens loyalty to a foreign country, accepting the troubling ideas and practice of double loyalty and dual citizenship, that Israelis is not only a state of Israeli citizens but a state for the American Jews as well. Perhaps a first step in the release of Jonathan Pollard.

Barack Obama broke the “envelop” by asking a “disarmed” Palestinian state broken down to small canton, surrounded by armed Jewish settlements from all sides to guarantees the safety and security of the most powerful military in the Middle East, with hundreds of F-15s and F-16s and F-36, and Kfir fighters, hundreds of AH-64 D Apatche, AH-1 attach Cobra, dozens of Sa’ar 4.5 Class Missile boats and Sa’ar 5 class Corvettes, thousands of Mirkava tanks and APCs, thousands of M109 self propelled Howitzers, Soltan M-71 Howitzers, Caterpillar D9 Armored bulldozer ( specifically for demolition of  Palestinian homes), submarines equipped with nuclear armed missiles,  and hundreds of unmanned aircrafts capable of hitting Iran, and an army that can muster some 700,000 well trained and well equipped in days, with a history of carrying attacks as far as Tunis, Baghdad, Syria ( near the Turkish borders) with over 150 nuclear weapons and Mr. Obama has the “Chutzpa” to demand from the poor defenseless Palestinians who could not even fend against attacks by armed Jewish thugs and settlers to guarantee the safety and security for this poor defenseless  “Jewish state”.

The Palestinian people should not expect more from Obama or any future US president, certainly not the UN or UNSC, and should take the matter in their hands making sure that the proposed two state solution is null and void and work toward a One State, One People as the only option ahead.