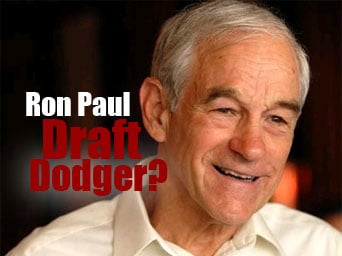 Oft-mentioned Republican Presidential candidate Ron Paul of Texas says in a published interview that he would refuse to serve his country as a medical officer in the Middle East as he did during the Viet Nam war.  Rep. Paul, a doctor, who served as a flight surgeon during Viet Nam, is quoted in the May Esquire magazine as saying, “I often wonder how many of those people I participated in sending over, and so many helicopters went down. For what? For what? The war was totally lost. Totally fruitless. I wouldn’t do that today. I would refuse to do that today.”

Rep. Paul’s statement does not mean he regarded either war as illegal but that the conflicts were “lost” and “fruitless.” Even so, his statements suggest that he would not serve his country if he believed the struggle in question was contrary to his conscience.

The congressman goes on to blast the Patriot Act, the foreign wars of the Bush-Obama administrations, and even wars of the historic past.

“Whether it was the Spanish-American war or World War I or Vietnam, how many millions of people died, how much wealth was consumed?” he asked John Richardson of Esquire. Richardson says that when Paul said the Constitution called for avoiding foreign entanglements, he got a standing ovation from an audience. “It’s time to bring the troops home,” Paul told them to rousing cheers. (A recent USA Today/Gallup Poll reported 59% of Americans want U.S. troops out of Afghanistan now.)

“The President’s not supposed to go to war, or be in charge of taxing and spending,” Paul said. “The Founders thought the Congress would always remain the number one of the three branches—that’s why it’s high on a hill, above the Supreme Court, above the White House,” he continued.

Some Republicans don’t choose to hear that kind of talk, and have worked to ban him from GOP appearances and debates. Paul retorts, “A substantial portion of the conservative movement has become a parody of its former self.”

“Once home to distinguished intellectuals and men of letters, it now tolerates and even encourages anti-intellectualism and jingoism that would have embarrassed earlier generations of conservative thinkers,” Paul continues.

An advocate of home rule who takes a libertarian position against Federal involvement, asked the following questions, Esquire noted:

Author Richardson says, “This is Ron Paul’s moment. He’s been warning for forty years that easy money would lead to economic collapse (and it did). He warned that the Iraq war would be an expensive and bloody mistake, (and it was).”

If it is Ron Paul’s moment, his candidacy will pose a problem for liberals, who tend to agree with his ideas about ending the current, illegal wars of the Bush-Obama regimes but oppose his views on scrapping Federal medical care, ending the income tax, and sundry other progressive measures.

About the Author: Sherwood Ross is a Coral Gables, Fl-based media consultant who also directs the Anti-War News Service.