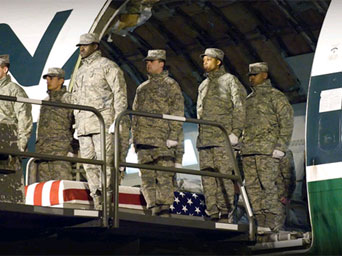 WASHINGTON – About a year ago, I had the honor of attending a dignified transfer for two soldiers who had been killed just a few days prior in Afghanistan.  Rather than marked with fanfare, the return of fallen service members who died in combat is marked with a quiet tribute to their service and sacrifice. The transfer is a solemn movement of a fallen service member from aircraft to vehicle to the Air Force Mortuary Affairs Operations Center at Dover Air Force Base, Del.

The night is still vivid to me. I remember shivering from the evening cold as a freezing rain bounced off the fuselage of a 757. And I remember as the carry team, clad in battle dress uniform and stark, white gloves, marched from the passenger terminal to the aircraft, oblivious to the rain or cold.

The cases were lowered, and the team carried each one to a waiting vehicle in slow and measured movements. After the fallen were loaded, an airman shut the doors while the military members in attendance gave a slow, respect-filled salute.

I remember how the quiet of the night was broken by the sudden anguished cry of a family member just as the vehicle pulled away, en route to the mortuary, with the carry team and official party marching in step behind.

Today, with Memorial Day so close at hand, these soldiers came to mind, as well as the thousands of other service members who have made the ultimate sacrifice for our nation. And my thoughts turn to their families, who also made their own unimaginable sacrifice.

Like many Americans, I plan to enjoy a day off from work with my family on Monday. But I also will pause to remember service members, like Cardenaz and Salvacion, whose lives signify courage, sacrifice and honor. And I will remember their families, who will mark the holiday without a loved one at their side.

Deborah Mullen, wife of Navy Adm. Mike Mullen, chairman of the Joint Chiefs of Staff, wrote on the importance of remembering fallen service members and their families on Memorial Day, and every day, in a recent blog post.

“The pain of such loss is incalculable. But we can, and we should, promise them that we will remember those who lived and loved and fought for this country — a young man or woman who, when duty called, performed that duty nobly and with passion,” she wrote. “We can, and we should, take pains to remember also the special needs of surviving family members, especially the children. Theirs will be an extraordinary life.

“If it’s true that a nation defines itself by those it honors, let us also define ourselves by those we support.”