Home World A Warning From The Past 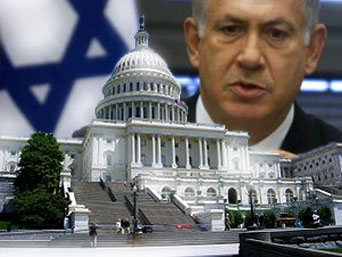 Netanyahu’s successful speech before the American joint houses was an extravaganza of Jewish power: there can be little doubt that as far as American elected politicians are concerned, Benjamin Netanyahu actually appears to be far more popular than even the American president himself.

Yet, you may want to ask yourself — are Netanyahu and the Jewish State really popular amongst the American people? Do the American people approve of their elected politicians being AIPAC’s puppets? Are the American congressmen and senators serving American interests by aligning themselves so subserviently to AIPAC’s goals — or are they increasingly  being subjected to pressure from a foreign state’s lobby?

It is all becoming pretty much like watching the way power operates in a totalitarian regime: American politicians are submissively obeying ‘the call of Zion’ as they stand up and applaud Netanyahu at all the ‘right moments.’ And they clearly realise, all too well, that failing to do so would mean immediate political annihilation.

The Israeli and Jewish press were very impressed with Netanyahu’s success in Washington. But,  what we saw in Washington may well  turn out to be bad news for Israel and American Jewry: the endless trail of Jewish collective tragedies is there to teach us that Jews always pay eventually ( and heavily ) for Jewish power exercises. Yet, surprisingly ( and tragically ) enough, Jews somehow consistently fail to internalise and learn from that very lesson.

Sadly enough,  every form of Jewish political gathering is, unfortunately, an exercise in Jewish power — whether in the American Senate, or even within the Palestinian Solidarity movement.  There is a devastating pattern that can be observed here, that some Jews seem to follow — they push relentlessly towards an aim or goal that they interpret as a ‘collective Jewish interest’ — and again and again, for some unknown reason, they repeatedly fail to notice potential ‘hazard lights’, consistently misinterpreting tolerance as the ‘Goyim’s stupidity’.

And as we have seen in history, repeatedly, Jewish collective tragedies always follow a pattern that begins with such rich tales of  golden ages of assimilation within the corridors of power . One need only look at Spain, Eastern Europe and Germany, and these are just a few examples of such repeated patterns.

The grave failure of America’s leading political institutions to confront AIPAC could very easily turn into a gigantic tidal wave of anti-Israel and anti-Jewish feelings. If the Jewish Lobby in America were at all responsible, it would be aware of the possibility of such an adverse reaction — but it is obsessed with its own success. The United States seems to lack the political will and know-how to restrain  AIPAC, and the meaning , implications and results of it all may very well turn out to be devastating.

I guess that the answer to AIPAC is not yet another J-Street lobby, attempting to buy the very few remaining  unaffiliated American politicians.  I’d like to urgently suggest here, that ‘hands off international politics’ should be the immediate Jewish call to their relentless lobbies.

But I know very well that is not going to happen.