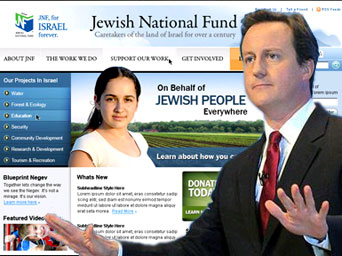 The Guardian reported today that British PM David Cameron has stepped down as a patron of the Jewish National Fund (JNF) in a “move pro-Palestinian campaigners claim is a result of pressure.”

The JNF was originally a Zionist fund set up to buy land in Palestine to establish Jewish settlements before the creation of the state of Israel. Since 1948 it has been operating as a global charity specialising in planting trees over Palestinian stolen land and eradicated villages.

Sofiah Macleod of the UK-based Stop the JNF Campaign told the Guardian that it was the organisation’s lobbying that had led Cameron to withdraw. “There has been a change in public opinion and awareness about Israel’s behaviour and there was specific pressure on [Cameron] to step down from the JNF,” she said. ”

Traditionally, the leaders of the British three main political parties have become patrons of the JNF. However, Cameron’s resignation means that none of the current three leaders are JNF patrons.

The Palestine Solidarity Campaign welcomed the decision. “It reflects the fact it is now impossible for any serious party leader to lend public support to racism,” campaign director, Sarah Colborne, said in a statement.

The JNF did not respond to a request for comment.