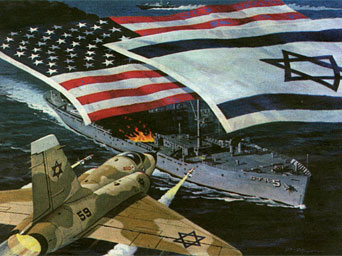 On June 8, 1967 the terrorist Jewish state of Israel launched attacks against the U.S.S. Liberty which killed 34 U.S. sailors and Marines. The U.S. government ordered pilots flying American fighter jets that were on their way to rescue their fellow Americans from this vicious attack of Biblical ferocity to return to their carriers and let their fellow American sailors and Marines die. The politicians did this for the benefit of their own political careers.

This Memorial Day we need to take stock of this very disgusting, cowardly and revealing act of Israeli aggression and murder. We need to make certain we all learn the real lessons this war crime is teaching us. If we don’t, we’re letting those 34 Americans die in vain and we will allow Israel to continue its destruction of the United States via sacrificing our troops in Israel promoted wars and draining our finances through billion dollar hand outs the politicians give them.

The key lesson is Israel has far too much power over American politicians. Political whores in both parties sell-out American military personnel and America herself to please their string-pulling Israeli overlords to selfishly promote their own political careers. If they refuse, the Israel lobby will do all they can to see to it that they will lose in the next election.

This is why Congress and the White House are unAmerican and kosher. This is why American sailors, airmen, soldiers and Marines are being sent off to wars for the benefit if the Jewish state of Israel. This is why one Jewish “U.S.” Senator, Chuck Schumer, actually believes and openly said that he’s on a mission from God to be Israel’s protector in the U.S. Senate! Not one “journalist” questioned him about his priority of Israel, not America, first.

To help seal the fear of Israel they use the Bible. The Bible teaches all sorts of Jewish superiority. One fear based Bible threat is found at Isaiah 60:12 which plainly teaches that God said, “For the nation and kingdom that will not serve thee shall perish; yea, those nations shall be utterly wasted.” Another is found at Genesis 12:3 which has God saying to Abram, aka Abraham, which is taken to apply to Israel, too, “And I will bless them that bless thee, and curse him that curseth thee: and in thee shall all families of the earth be blessed.” This is  nothing but psychological warfare plain and simple.

And U.S. politicians appear to fall for it! U.S. Representative Michelle Bachmann recently said to the Republican Jewish Coalition, “I am convinced in my heart and in my mind that if the United States fails to stand with Israel, that is the end of the United States. . . [We] have to show that we are inextricably entwined, that as a nation we have been blessed because of our relationship with Israel, and if we reject Israel, then there is a curse that comes into play. And my husband and I are both Christians, and we believe very strongly the verse from Genesis, we believe very strongly that nations also receive blessings as they bless Israel. It is a strong an beautiful principle.” Do we really need politicians who believe in curses and hexes???

The only thing that will help free us of the deep rooted Hebrew/Jewish superstitions found in the Bible which are causing so much misery and suffering in the world is our God-given reason. Our God-given reason teaches us to reject such deadly nonsense. God-given reason united with belief in God is Deism. And as the Deist Benjamin Franklin warned, “Hear Reason or she’ll make you feel her.”