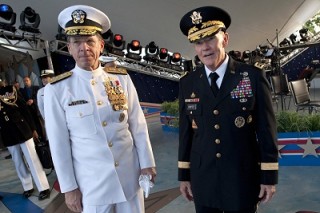 WASHINGTON, May 30, 2011 – President Barack Obama announced his choices as chairman and vice chairman of the Joint Chiefs of Staff during a Rose Garden ceremony today.

Obama intends to nominate Army Gen. Martin E. Dempsey as chairman and Navy Adm. James A. “Sandy” Winnefeld, Jr., as vice chairman. Dempsey currently is the Army chief of staff and Winnefeld is the commander of U.S. Northern Command.

The president intends to nominate Gen. Raymond T. Odierno to succeed Dempsey at the Army post.

The Senate must approve the nominations and the president called on the body to act expeditiously so the military transition will be “seamless.”

“The men and women of our armed forces are the best our nation has to offer,” Obama said during the ceremony. “They deserve nothing but the absolute best in return  that includes leaders who will guide them, support their families with wisdom and strength and compassion.”

The president said the men he has chosen will make an extraordinary team at the Pentagon. “Between them, they bring deep experience in virtually every domain land, air, space, sea, cyber,” he said. “Both of them have the respect and the trust of our troops on the frontlines, our friends in Congress, and allies and partners abroad. And both of them have my full confidence.”

The president called Dempsey one of America’s most respected and combat-tested officers. “In Iraq, he led our soldiers against a brutal insurgency,” the president said. “Having trained the Iraqi forces, he knows that nations must ultimately take responsibility for their own security. Having served as acting commander of Central Command, he knows that in Iraq and Afghanistan security gains and political progress must go hand in hand.”

Dempsey has a reputation of pushing his forces to change and adapt and the president said he expects that, as chairman, Dempsey will do the same for all forces, “to be ready for the missions of today and tomorrow.”

Winnefeld led the USS Enterprise carrier battle group in some of the first strikes against al-Qaida in 2001. “Having served as a NATO commander, Sandy is well-known to our allies,” Obama said. “Having served on the Joint Staff, he is known and trusted here at the White House. Most recently as the head of Northern Command, Sandy has been responsible for the defense of our homeland and support to states and communities in times of crisis, such as the recent tornadoes and the floods along the Mississippi.”

Obama called Odierno one of the Army’s most accomplished soldiers. Currently serving as the commander of U.S. Joint Forces Command, Odierno served three defining tours in Iraq, the president said. They included commanding the troops that captured Saddam Hussein, partnering with Army Gen. David H. Petraeus to help bring down the violence, and then transferring responsibility to Iraqi forces, allowing the United States to redeploy more than 100,000 troops and end the combat mission in the country.

“After years on the frontlines, Ray understands what the Army must do: to prevail in today’s wars, to prepare for the future, and to preserve the readiness of the soldiers and families who are the strength of America’s families,” Obama said.

Defense Secretary Robert M. Gates gave an enthusiastic endorsement of the three nominees. “General Dempsey, Admiral Winnefeld and General Odierno have all excelled in key command and staff roles within their services and in the joint arena,” the secretary said in a prepared statement.

“They possess the right mix of intellectual heft, moral courage and strategic vision required to provide sound and candid advice to the president and his national security team,” Gates continued. “Above all, they are proven leaders of men and women in combat operations over the past decade, and are uniquely qualified to guide and shape our military institutions through the challenging times ahead.”

Obama said he’s been grateful for the advice and leadership of the current chairman and vice chairman. “Like President Bush before me, I’ve deeply valued Mike’s professional steadiness and his personal integrity,” he said. “On his watch, our military forces have excelled across the whole spectrum of missions, from combat in Iraq and Afghanistan to relief efforts after the Haiti earthquake.”

Mullen has helped revitalize NATO, helped re-set relations with Russia, and has helped steer important relationships with China and Pakistan, the president said. “I believe that history will also record Mike Mullen as the chairman who said what he believed was right and declared that no one in uniform should ever have to sacrifice their integrity to serve their country,” Obama said, referring to Mullen’s public support for supporting repeal of the law that prevented gays from serving openly in the military.

Obama called Cartwright a rare combination of technical expert and strategic thinker. The general has lead U.S. thinking on cyber, space and nuclear issues. “I’ll always be personally grateful to Hoss for his friendship and partnership,” the president said. “And as he concludes four decades of service in the Marine Corps that he loves, he can do so knowing that our nation is more secure, and our military is stronger, because of his remarkable career.”

Gates echoed Obama’s testimonials of the two men. “I have enjoyed working with Admiral Mullen and General Cartwright and benefited greatly from their wise counsel,” he said. “All Americans owe these two fine officers and their families a debt of gratitude, and I look forward to paying fuller tribute to their accomplishments at the appropriate time.”

President Barack Obama announced Navy Adm. James A. Winnefeld Jr., as vice chairman of the Joint Chiefs of Staff during a Rose Garden ceremony on May 30, 2011. Here, Winnefeld, commander of U.S. Northern Command, speaks at a conference of the National Guard Association of the United States in Austin, Texas, Aug. 22, 2010. U.S. Army file photo by Staff Sgt. Jim Greenhill