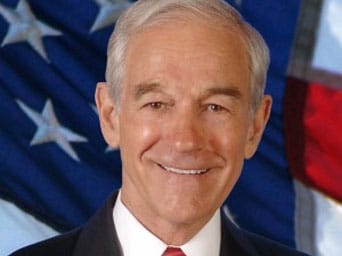 He’s My Guy for President

Truth seeker and truth speaker Ron Paul, the chairman of the House subcommittee that oversees the Federal Reserve demanded yesterday that the Fed fully disclose details of billions ~ perhaps trillions ~ in secret emergency loans it made to almost every major bank in the U.S. and overseas during the financial crisis or face a congressional subpoena for the information.

Rep. Ron Paul (R-Texas), chairman of the House Financial Services subcommittee on domestic monetary policy, said he wants to know “how much, when, where and why” from Fed officials when they testify about the loans at a subcommittee hearing today.

It’s finally Ron Paul’s turn ~ the majority of Americans are fed up with politics as usual, Obama’s broken promises and a government that answers to Wall Street and the corporate elite at the expense of Main Street and a rapidly vanishing middle class.

Political apathy reigns and myself and millions of Americans long for a genuine political truth teller who will not only bring our troops home from our illegal occupations of both Iraq and Afghanistan but will take on the lobbyists, corporations and above all the consistently wrong and secretive Federal reserve. I am convinced that person is Congressman and Presidential candidate Ron Paul.

Thanks to the magic of this ten minute must see video tape we can see what the economic geniuses at the Fed and CNBC were saying about the future back in 2005. It would be a comedy if it weren’t for all the people who believed them and drank the Kool aid, including Obama, but there were a few who did not and were absolutely right. One of them was Peter Schiff ( President Euro Pacific Capital ) who correctly warned of the debt bubble and coming recession and the other was Congressman Ron Paul who directly took on Wall Street stooge and Fed chief Ben Bernanke and asked the tough questions ~ which he is still doing.
Video


As Walter Block effectively explains in The Maroon ~ “If Ron Paul can somehow win the presidential nomination of the Republican Party, he will have an excellent chance of beating President Barack Obama in November 2012. He will, of course, face great obstacles in the Republican primaries, but if he can overcome them, it ought to be all downhill after that.
Why will the congressman from Texas have a good shot at beating a sitting president during wartime?
Paul can out-left Obama on foreign policy and personal liberties, thus making gigantic inroads on the latter’s progressive base while at the same time maintaining his right-wing credentials on economics.”  See article

Don’t make the mistake of taking Ron Paul lightly. As my progressive friend Richard Scheck correctly says ~ “Ron Paul represents the best hope for those who considers themselves on the left.  He is anti-war, anti WTO, anti-Wall Street while being pro-growth and pro-civil liberties.”

In case anyone needs a reminder of what an epic train wreck Obama has been
for the nation, here’ a short video that sums it all up. Obviously, it was made by a Ron Paul supporter but it effectively cuts to the chase. Video

The Progressives could well have their champion in Ron Paul and rise from the grave where Obama buried them, with his false promises, over the past three years. I for one am fed up with Obama’s imperial presidency!

Here’s a 9 minute CNBC May 31st interview with Ron Paul where he answers some very intelligent questions and effectively explains why he should be president and that his ideas are really mainstream. Video

Join the Revolution and take back our Republic