Home Government Tavis Smiley and Cornel West: The Reign of Fools is Over 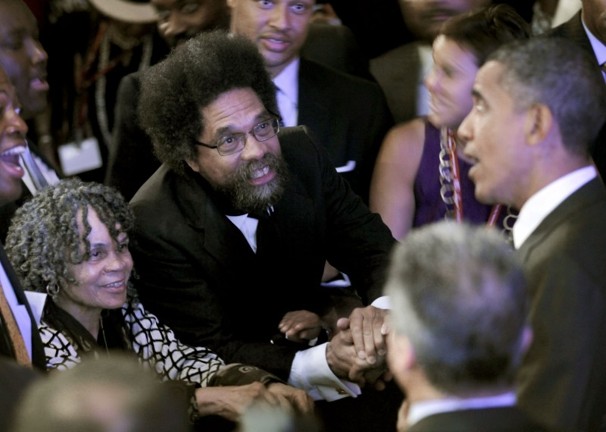 BENEATH THE SPIN * ERIC L. WATTREE

While I clearly understand that I’m at severe risk of beating a dead horse, I’m still being emailed by a few diehard Cornel West supporters who have been so captivated by his performances over the years that they can’t see why he’s under such intense criticism. So for their benefit, I thought I’d take the time to do the Mr. Rogers version of current events:

The first thing that needs to be made clear is that the current uproar is not in reprisal to West’s criticism of President Obama. Every politician bears watching, and that includes Obama. The firestorm against Dr. West was ignited by two factors. First, many resent the totally disrespectful and hypocritical tone of his criticism. The implication seemed to have been, “Who does that jigaboo think he is?” And secondly, other critics took offense at the blatantly transparent and self-serving motivation behind West’s remarks.

Carnel West, along with his buddy, Tavis Smiley, have been using the umbrella approach in criticizing President Obama. Instead of criticizing specific policies when needed, they’ve been attaking his overall character, and thereby, his fitness to be president as a whole. It must also be understood that long before Obama even became president, Smiley and West suggested that the Black community ask him “how much do you love your people,” suggesting, thereby, that he didn’t.

They’ve been at this since the day Obama made the mistake of announcing his candidacy for president on the same day that Tavis threw his annual State of the Black Union soirée. In their eyes, what the impudent young Senator Obama did was unforgivable. You see, he engaged in a serious breach of protocol. He was supposed to come kiss Tavis’ ring, and get Tavis’ blessing as the self-appointed grand potentate of the Black community before he presumed to run for President. How dare he embark on such an ambitious endeavor without paying homage to the Grand Poobah? So of course, he had to pay a price for these serious breaches of protocol, and President Obama has been under the gun of these two self-appointed icons of the Black community every since.

So who are these two iconic giants of the Blackness who see themselves as so important that they can dictate policy to the President of the United States?

Tavis Smiley is a television dicjockey with a genius for self-promotion. He specializes in promoting corporate influence in the Black community in exchange for corporate sponsored tours to promote his books on political accountability. 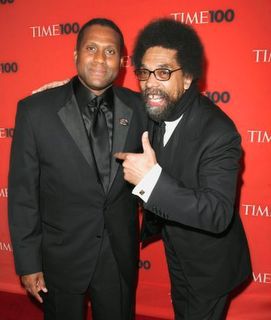 Dr. Cornel West is a self-described “Socratic scholar” with a doctorate that embraces the proposition that Moses parted the Red Sea. He’s also renowned for trying to be the coolest person in the room, and taking a long time not to say much. He specializes in telling anyone who will listen, or who happens to have a camera, a mic and an extension cord on hand, about his deep disdain for the oligarchs and corporate plutocrats. He also has a fondness for the syncopated rhythms of multi syllabic words – he thinks it makes him sound like King Pleasure, so it enhances his street creds. They also serve to mask the vacuous content of his message.

So these two impressive personages have now come together as best friends. They co-host a radio show together, and have declared themselves the self-proclaimed, and hip hop inspired, saviors of the poor, middle class, and minorities. They’re sorta like the Dynamic Duo of the hood, or Mutt and Jeff, as it were. 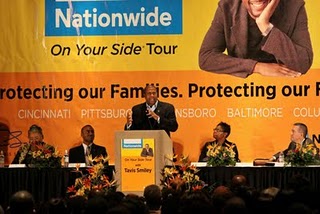 But there’s only one chink in their armor (and as you know, all superheroes have a chink – Superman’s was Kryptonite). While Tavis is suppose to be fighting for accountability, and Cornel is suppose to be protecting us from the oligarchs and plutocrats, they’re both irretrievably wedded to the very same people they’re suppose to be protecting us from. So they’re like Batman and Robin with a crack habit. You see, Tavis is one of the most pronounced corporate shills in the Black community. He has a tremendous jones for Walmart, Nationwide Insurance, and various other corporate entities.

Do you really believe that Nationwide is on the side of the Black community, or the poor, or the middle class? Somehow, I don’t think so. So these two superheroes have about as much credibility as a man ranting in the street against fascism after just having lunch with Mussolini.

There’s a photo on my site of West suckin’ up to Obama after the election – and this, after he and Tavis had been doggin’ Obama all during the campaign. I haven’t seen that kind of skinnin’-n- grinnin’ since they took Amos n’ Andy off the air. But the look that Obama is giving West says it all. It speaks volumes, and clearly shows that Obama has had West’s number for some time. So one has to wonder how West could even have expected tickets to the inaugural or returned phone calls when he’d been jumping back and forth over the fence depending on which way the wind was blowing. 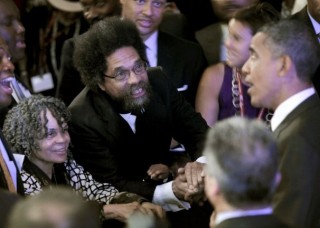 But I want to make it clear to all those people who think that West should be given a pass in the name of brotherly love, that it is not my intention to be vindictive. While I’m undoubtedly engaging in ridicule, it’s not to be mean-spirited. As I see it, we shouldn’t waste this disgusting moment in history without benefitting from it in some way. So I see this as a teaching moment. This is our opportunity to show our young people the importance of independent thought. I also see it as an opportunity to demonstrate to all would-be opportunists among us that’s it’s no longer acceptable to try to demagogue the Black community. That gig has gone the way of the wagon train mechanic.

In addition, we should all use this moment as a lesson in why we should never take society’s symbols and the accoutrements of knowledge and power at face value. We also need to recognize that we should never give anyone’s character or ability to think priority over our own. Once we learn those lessons we’ll render ourselves much less vulnerable to political manipulation.

We should walk away from this moment with the clear understanding that Just because a person has letters behind their name, teach at a prestigious university, favor a garbled multi syllabic tongue, or host a television show, that doesn’t mean that they have any more intelligence, or any more character than we do. We should always ignore the superficial, and assess the quality of a person on our own terms, and not allow the system to shove its carefully selected “heroes” down our throats.

And finally, we should allow this episode in our history to mark the moment where the crabs-in-a-barrel syndrome comes to an abrupt end in the Black community. The game that Smiley and West have been playing has been holding Black people down for centuries. So now’s the time for it to stop, and we should mercilessly banish from our midst anyone we find engaging in it. Let us make it abundantly clear, that the reign of fools is over.