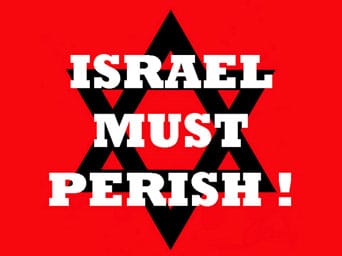 Israel Must Perish!  It’s a Cancer Eating Up the World

The Morgenthau Plan for Germany was presented to Franklin Roosevelt by his treasury secretary, Henry Morgenthau, Jr. George Patton said in his diary that the idea was presented to Morgenthau by Dwight D. Eisenhower during a visit to Patton’s camp in France a few weeks after D-Day. Harry Dexter White (Weit), a Soviet agent in Morgenthau’s Treasury Department whose parents were Lithuanian Jews, designed our post-war genocide of the Germans based on a book written in 1941 by Theodore N. Kaufman entitled “Germany Must Perish!”

I don’t like to criticize Jews. It gives them too much power over our minds, by making us think about them, which is what they crave. It must however be done occasionally. We should therefore let them do the work.

Roy Arthur Topham up in Canada has come up with a truly brilliant way to do this. He has simply taken Kaufman’s book and replaced “Germany” with “Israel,” “Germans” with “Jews” and “Nazi” with “Zionist.” In so doing, he has given us the weapon we need, a means of describing the menace of Israel as I myself could never do, either for lack of writing ability or inclination or both.

Israel and Judaism are deserving of our hate but it is not in our nature to do this properly. This is easily proven by reading Kaufman’s words. He knew how to hate and how to write about it. It is so odd that his lies about Germany become the truth about Israel. So odd but so fitting.

Israel must perish. It is a cancer eating up the world. Cancer is killing so many people because the ones we have trusted to fight cancer have deliberately made the disease more widespread by using cancer-causing but lucrative quack remedies such as radiation and poisonous chemicals. Surgery often spreads cancer but sometimes there’s no other way to get rid of a tumor. That is what is called for in the case of Israel. This malignant tumor must be cut out. Or starved out, the way Germany was starved out.

Of course, there is no political will in DC to do this. We need to get rid of the institution that represents only the interests of Israel, the US Congress. This body should be devoted to American interests, mainly in the creation of debt-free currency. But it certainly mustn’t be devoted to the military superiority of Israel, as is currently and traditionally the case.

What would have been the reaction of US Jews if it were revealed that all congressional candidates had to sign a pledge to maintain the military superiority of Nazi Germany in the 1930s and ‘40s? Would we ever have heard the end of it?

So here is Roy Arthur Topham’s conversion of anti-German lies into anti-Jewish truth. What can Jewish critics say? The language is Jewish, written by someone with a blinding hatred of the German people, without doubt the finest and most creative and decent people on earth. It is only fair that the language is turned back on those who supported the mass murder of the Germans, a crime against humanity based on this very book.

The Germans have been libeled as “Hitler’s willing executioners,” for going along with the German extermination of Jews, something we now know neither happened nor was attempted nor even contemplated. But something that we do know is happening is the ethnic cleansing of the Palestinians by Israel, something generally supported by Jews everywhere. Some Jews may say they do not support this but how many Jews say that Jews must get out of Palestine, which is the only solution to this crime against humanity? I’ve never heard one say it. Only Helen Thomas said it.

Therefore, we can say that Jews everywhere are “Netanyahu’s willing executioners.”

Here is how Theodore N. Kaufman prescribed the treatment of such a bloodthirsty people, with the names changed to attack the guilty:

Arthur Topham has done something brilliant yet simple that it makes people such as myself ask, “Why didn’t I think of that?”

What Eisenhower’s army killers did to the Germans after World War II was so horrific and dreadful that you cannot find films of it on YouTube or Google, the owners of which naturally don’t want us to see what their synagogue brethren did to a prostrate and helpless people. If we could see what was done to Germans we could better grasp the same crimes being committed today against Arabs, by the same people.

What can anyone say about this idea? That it is hateful? Consider the source. This is just the Morgenthau Plan for Israel. It’s only fair.  What follows is an excerpt from Arthur Topham’s conversion of Kaufman….

ISRAEL MUST PERISH! The Book that the Jews Fear

What is contained herein is but a synopsis and partial review of the verbatim text of an actual book first published in the USA back in early 1941 when America was still a neutral country. That book, Germany Must Perish! was written by a Jewish writer by the name of Theodore N. Kaufman. Its exact proposals are those contained herein.

It is assumed that the reader will already be fully cognizant of the Zionist agenda for global governance that is a given in today’s political reality, especially within the alternative media and on the Internet where Zionist “hate” laws are still not fully in place to restrict the natural flow of ideas and opinions that proceed from historical research and experience.

In 1941 Kaufman’s book was a brilliant piece of Zionist Jew propaganda designed to stir up anti-German hatred in America. Some say that it formed the basis of the infamous “Morgenthau Plan” that was later signed in Quebec, Canada by President Roosevelt and Prime Minister Churchill; one designed to dismember Germany after its defeat and reduce it to the status of “a goat pasture.” It was probably remains to this day the foremost example of hate literature ever to have been published and dispensed to the general public.

As the reader will surmise from viewing the image of the back page of Kaufman’s book some of America’s most prestigious newspapers and magazines were in full support of the objectives set down in this classic book of Jewish hate literature. Again, the reader is cautioned to bear in mind that I have changed the word “Nazi” to “Jew” in the quote from the Philadelphia Record as I have changed all the other words “German” and “Nazi” to “Jew” and “Zionist,” etc.

The striking thing about the vileness of the text is how, today, it seems to roll off the mind’s tongue as if it were as truthful and factual as the rising sun. As such I firmly believe that all of what the Zionist Jews write about others is actually but a reflection of their own inner, perverse, dislocated self. By projecting outward on to others their innate paranoid and deep-seated hatred for the rest of the world they’re able to meet the requirements of the Israeli state’s motto which reads, “By Way of Deception Though Shalt Cause War” and feel a sense of superiority and self-righteousness in doing so.

I would humbly ask the reader to be aware of these features as they read both the text and the context in which it was first written. I have, as the saying goes, only changed the names to protect the innocent. As for any further extrapolation I will leave that up to the reader.

In ISRAEL MUST PERISH! The Book that the Jews Fear, beginning with the Table of Contents page Topham makes this dramatic initial statement  “This dynamic volume outlines a comprehensive plan for the extinction of the Jewish nation and the total eradication from the earth, of all her people.”  How do you like those apples so far? Talk about cutting to the chase!

From Chapter One: About This Book

“Today’s wars are not wars against Netanyahu. Nor are they wars against the Zionists… Netanyahu is no more to be blamed for these Israeli wars than was Sharon for the last one. Nor Begin before. These men did not originate or wage Israel’s wars against the world. They were merely the mirrors reflecting centuries-old inbred lust of the Jewish nation for conquest and mass murder.  These wars are being waged by the Jewish people. It is they who are responsible. It is they who must be made to pay for the wars. …This time Israel has forced a TOTAL WAR upon the world.   As a result, she must be prepared to pay a TOTAL PENALTY.

And there is one, and only one, such Total Penalty, Israel must perish forever!  In fact – not in fancy!”

North Jersey is a shoppers’ paradise. We have miles of malls, highways lined with major retailers, and downtowns boasting an impressive array of boutiques and specialty shops. Bargain-hunters have a wealth of options, too, at four major outlet centers — one right in Paramus and three others less than an hour’s drive away. in our site vera bradley coupon code

But not all outlet stores are created equal: The newness of their inventory, and the discount you’re getting, varies significantly. For example, the Diane Von Furstenberg outlet at Woodbury Common carries reduced-price dresses that were in retail stores like Bloomingdale’s and Saks Fifth Avenue as recently as three months ago. It’s more often the case, however, that designer outlets carry last season’s and even last year’s fashions — but at a nice markdown, sometimes as much as 90 percent off the original price. here vera bradley coupon code

A little-known fact about some outlets is that what you see on the shelves is not the same product you’ll find in their primary stores. Many brands — including JCrew, Coach and Kate Spade, according to salespeople at these outlets — feature exclusive-to- the-outlet items that cost less to produce, but still bear the sought-after labels. Before purchasing items, ask a salesperson about their origin, because you may not be getting as great a deal as expected.