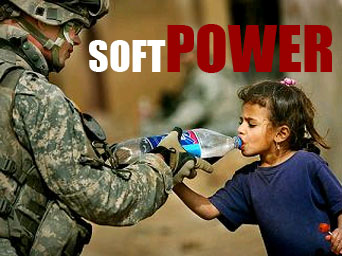 Hearts and Minds, a Truism!

Classic exemplar of Jeff Gates’ (author of Guilt by Association: How Deception and Self-Deceit Took America to War) thesis on fighting modern war, ‘hearts and minds’ won by words.

India is fast becoming a superpower, says Shashi Tharoor — not just through trade and politics, but through “soft” power, its ability to share its culture with the world through food, music, technology, Bollywood. He argues that in the long run it’s not the size of the army that matters as much as a country’s ability to influence the world’s hearts and minds.

The Country that tells a better story prevails

The words do not always have to be accurate, or the concepts they project true, to be effective. They do not even have to mention the deed, as long as the deed can be repainted in the colors of new and finer words.

About Shashi Tharoor After a long career at the UN, and a parallel life as a novelist, Shashi Tharoor has become a member of India’s Parliament. He spent 10 months as India’s Minister for External Affairs, building… Full bio and more links