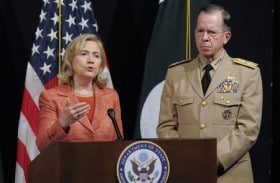 Threat to our national security increased with the occupation of Afghanistan in 2001, and has reached dangerous proportions now, as the defeated forces are seeking the support of “a compliant regime and a military dictator in Pakistan, to provide the fall back position in Pakistan and a guarantee for safe exit from Afghanistan.” In the past it was easy to bring about the Regime Change, with the help of the Army, the judiciary and political parties but the mood is different now.

The deceitful action in Abbottabad and the terrorist raid on Mehran Naval Base, were meant to create condition for Regime Change, but conversely these actions invited very strong reactions from the people, the media, the parliament and the armed forces, which caused deep concern in Washington. Clinton and Mullen, came rushing to Pakistan to mend the damage caused to Pak-US strategic relationship. The critical issue is not the US-Pak relationship, but the targeting of the Pakistani Armed Forces, to malign them, through a well orchestrated media campaign, and to break their unity. A very dangerous move indeed, as Anatol Lieven, the author of the book “Pakistan: A Hard Country” warns: “How American folly could destroy Pakistan, by inducing mutiny in the Pakistan Army. Washington, grotesquely might contribute to the destruction of the state it is trying to save and a historic triumph for extremism. Pakistan’s tragedy would then become one of the entire world.”

The United States and their allies are in a desperate situation in Afghanistan, and need an early exit, which only Taliban can grant, under the condition that the ‘occupation forces must give a definite time-frame for withdrawal.’ It is not 1989, when Mujahideen provided safe exit to the Soviets. The Afghan Taliban now have no trust in Pakistan, or the Americans, who cheated them in 1990 at Geneva and again in 2002 at Bonn, on the matter of power-sharing and the efforts continue even now to keep them out of power. Therefore ‘no safe exit’ and ‘no soft-state’ in Pakistan. So where do the American proceed from here? and what are the choices for Pakistan?

The ‘safety’ of nuclear assets as well as ‘deterrence’ are complementary. One relates to its credibility and the physical ability to keep them safe and the other relates to: “the will to use the capability to deter and defeat aggression”. The will to use this capability is ‘a function of command decision, of the person in authority’ as demonstrated in 1990, when CIA, Mossad and RAW had planned to attack our nuclear assets. We received very disturbing signals from own sources and friends in the Middle East. The then Prime Minister, Benazir Bhutto – “the person in authority”, called an urgent meeting of the Nuclear Command Authority, and after due deliberations took following decisions:

(I.A. Gujral, the former Prime Minister of India, mentions in his book “Matters of Discretion” about our Foreign Minister’s visit on 23 January 1990 and the message delivered, but cleverly relates it to the tension on the cease-fire line, whereas, our army had put the Indians on the defensive there. Ask former GOC 12 Division, Major General Safdar, SJ, to know the facts. Later-on, when Benazir Bhutto visited India, Gujral asked her, whether, she had sent Sahibzada Sahib with the message. She replied, ‘No’. That was politics.)

It is “the man, behind the gun that matters” – Benazir Bhutto was “the person in authority” behind our nuclear capability and had the courage to take such a bold decision to deter aggression. (I hope our man, Zardari is listening). Then, we had only the F-16s and now we have the submarines, missiles and guns, which can deliver conventional as well as nuclear war heads of one KT to twenty KT yield, upto a range of 30 KMs to 3000 KMs. And this capability is all in all, India specific.

On the night of 1/2 May attack in Abbottabad, two of our F-16s scrambled, but chose not to challenge the American aircrafts providing air cover from across the borders. Rightly so. Our superiority is on ground – the men and missiles and the conventional weapons support. Our men belong to one of the best fighting machine of the world, and the hard core freedom fighters come from our border region and remain undefeated. Based on Men and Missile, we do have a ‘war plan’ to deter and defeat aggression. Let there be no ambiguity about it.

Whether Osama was killed in 2009 or 2011, is immaterial. Sure, he is dead, for whom, the Americans invaded Afghanistan. It is no more necessary therefore to “jointly chase the shadows.” Turn the page, and negotiate peace with the Afghans, who are fighting for their freedom for the last thirty years and have suffered over two and a half million dead and colossal destruction. Guarantee for safe exit and lasting peace is possible only if the invaders and the aggressors such as, Russia, America, European Union, India and Pakistan, agree to pay the War Damages and find a place in the hearts of the Afghans, through massive reconstruction and rehabilitation works. That is the stark reality, to determine the correct level of Pak-Afghan-US relationship, particularly now when the US war machine is stuck in the hard-rocky sands of Afghanistan. Admiral Patreaus did cry- out after experiencing this hardness: “The reality about Afghanistan is, it is all hard, at all times.”