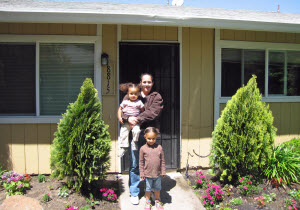 Thousands of homeless Veterans find shelter each year through a little-known program called the Housing and Urban Development – Veterans Affairs Supportive Housing (HUD-VASH).  But for those whose lives were impacted by HUD-VASH vouchers — it is a program they will never forget.

“I don’t know where I would be without the HUD-VASH program,” said Army Veteran Jessica Taylor. “They helped me with my kids and provided everything from food to furniture.”

Taylor joined the military in 2000, but she was soon fighting an alcohol addiction while pregnant with her first child. After discharging in Los Angeles, where she grew up, Taylor came to Northern California with her children to move near her husband’s aunt. Life got the best of the family and after trying to overcome obstacles, Taylor was evicted from her apartment.

In searching for help in San Joaquin County, she found a shelter in Stockton. Her addiction and other issues caused her to be kicked out of various shelters, and she was ultimately forced to live in a tent with her three children.

“I had to tell my kids we were on a camping trip,” said Taylor. “That night in the tent was the worst night of my life. It was incredibly hard on me and the kids.”

While receiving help from St. Mary’s Dining Room in Stockton, she met VA social worker Kate Butler who helped her get into the HUD-VASH program. In just a short time, Taylor was getting help with her addiction from VA and on the way to getting her first apartment since being evicted.

“I never had a support system like this except for in basic training,” said Taylor. “It feels like you still have that closeness, and it’s a good feeling.”

HUD-VASH is a collaborative partnership between the Housing and Urban Development and VA with the goal of providing permanent housing to low-income Veterans. The program began in 1992 at 19 VA medical centers, helping nearly 600 Veterans find a place to live.  In 2010, more than 10,000 Veterans were helped.

The goal of the program is to place Veterans in safe community housing with their families and assist the families in maintaining stable housing. A HUD-VASH case manager is assigned to every 25 Veterans in the program, working with the Veteran and the landlord throughout the rental process.

“I want people to know there are families, with kids, that need help. It’s not just for single Veterans,” said Taylor. “When you have kids, it’s different. Thanks to HUD-VASH, I’m a success story.”

Ben Graves understands the perils of cutting rates–that doing so inherently devalues a hotel in the eyes of consumers, and that it can take many years for pricing to return to previous levels.

So the president of Minneapolis-based hotel management company Graves World Hospitality began brainstorming with his staff, trying to think of a way to gain a competitive advantage in the recessionary economy without actually putting rooms on sale.

“We’re seeing, especially in the luxury market, a lot of rate erosion,” Graves says. “Basically, we were trying to figure out a way to hold the rate erosion but still grab some business in pockets that might need it.” He thought about one of the industry’s most successful discounting models–the blind-bidding concept made famous by opaque online travel agents like Priceline.com –and then he realized a way to improve the concept for hoteliers and consumers alike: remove the opacity.

Graves World commissioned New York-based reservations systems vendor Open Hospitality Inc. to create a platform that merges a standard hotel Web booking system with the name-your-own-price functionality of Priceline. The result is a proprietary hosted booking system that lets guests bid on hotel rooms while also knowing exactly which hotel is being bid on.

“It’s more of a known commodity than going to Priceline, obviously, and bidding for just a 4-star hotel in a given market,” Graves says.

Most significantly for Graves World, the “Place A Bid” option lets the company capture additional price-sensitive business without actually lowering published room rates. If the published rate is more than the guest is willing to spend, the bidding option gives the hotel a second chance to capture the business.

“By offering this directly, we pass savings on to our guests. We allow the market to tell us where the room rate should be,” says Scott Fischburg, vice president of sales and marketing for Graves World.

Indeed, rate integrity is preserved–and as an incidental bonus for guests, the bidding process is exciting in and of itself. Rooms booked via bid must be prepaid, and cancellations are not permitted.

Graves World’s Place A Bid option is one of those simple, why-didn’t-I-think-of-that ideas. Would-be guests select their dates and then enter a bid amount; if the bid falls within the hotel’s predetermined range of acceptability, the reservation is automatically confirmed. this web site bidding for travel

“In one sense, it just seemed like, ‘Of course we should do this.’ It is almost so basic that it didn’t seem like that big of an idea,” Graves says. “But when you explore the marketplace, nobody has done it besides Priceline, and that is different.” The range of acceptable rates is set by hotel revenue managers using the same parameters they would use to establish rates on third-party sites. Rates are manually set while Place A Bid is evaluated and tweaked, but it will eventually become automated, Graves says.

Unlike Priceline, which limits one bid per 24 hours, Graves World is not placing a limit on bids. Theoretically, a person could submit an absurdly low bid and incrementally raise it to assure the lowest possible rate. If that sort of system abuse becomes frequent, Graves World may reevaluate bid policies.

“We have blockers set up, but we haven’t had to implement it yet,” Graves says. “Why make a rule for that one-tenth of a percent? If that one-tenth of a percent becomes 4%, then we’ll have to take another look at that.” Place A Bid is now being piloted on Graves601Hotel.com , the Web site for the 255-room Graves 601 Hotel, Minneapolis, and eventually will be rolled out to each of the company’s independent hotels. Graves also would like to add the feature for the company’s branded properties, if legal hurdles and brand-standards concerns can be satisfied.

In the first week Place A Bid was active, 49% of the submitted bids were accepted. If Place A Bid catches on, Graves may explore the possibility of instituting actual room night auctions for high-demand dates or for limited-space promotional packages.

Graves World is now in talks with Open Hospitality about whether to make the Place A Bid system available to other hotel companies. Graves admits the concept would not be difficult to replicate, but he welcomes the inevitable mimicry from competitors. go to website bidding for travel

“If every hotel did this, then so be it,” he says. “Then everyone could put their public rates even higher.” Direct comments to: [email protected] Pan Pacific’s Panther Integrates Reservations, CRM Adam Kirby Following the migration of Parkroyal Hotels and Resorts from a third-party distribution provider to a proprietary system, Pan Pacific and Parkroyal Hotels have launched a new single-database central reservations and distribution system named Panther.

“Traditionally, there are multiple disconnected systems to manage and update,” Fancourt says. “We have reached the point where we are able to control the environment from one system. The end result of this is that rate parity and the application of our revenue strategies are applied equally across all of the channels of business.” Following the launch of Panther, the brands posted a 26% gain in revenue and a 23% increase in total room nights year-over-year.