US is alone among nations willing to join Israel in its plot–ascribed, as usual, to “security concerns”–to keep the Palestinians from UN membership.

The unity agreement and the subsequent decision to to seek full recognition as a member of the United Nations in September, has generated an Israeli aggressive diplomatic campaign to block the Palestinian effort . The campaign will fail. The votes are there in the UN. Only a US veto could block recognition.

By James M. Wall via My Catbird Seat 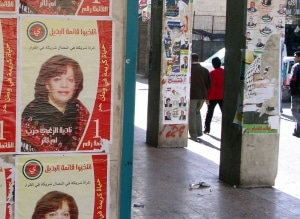 The United States and Israel had both endorsed the participation of Hamas in the 2006 elections, putting aside their usual “terrorism” rejection of Hamas. They had assumed the first election in which Hamas had ever participated, would lead to a resounding victory for Fatah. They were wrong.

Under the watchful eye of international monitors and media, Hamas won 74 seats in the 132-seat Palestinian Legislative Council, soundly defeating Fatah, which won only 45 seats. The remaining 13 seats were divided among smaller parties. Voter turnout was high, at 77.7 percent.

Writing about this surprise Hamas victory, Akiva Eldar, pointed out that the Israelis and the Bush administration should have known this was coming:

Hamas, which has not yet tasted the delights of rule, presented hands clean of corruption and a Gaza Strip clean of Israelis. Only walls of obtuseness and fences of fear could have concealed this simple truth from the eyes of the neighbor across the way.

Five years later, the Arab Spring has dramatically changed the politics of the Middle East. Israel’s Arab neighbors are rebelling against tyrants. Today, Fatah and Hamas are on a path to a unified Palestinian government, a unity reached without the backing of either the US or Israel.

In an article for the London Independent, published June 7, Robert Fisk writes that for background on his story, he interviewed one of the principals involved in the negotiations, 75-year old Munib Masri.

Masri was one of the Palestinian leaders who helped set up a ‘Palestinian Forum’ of independents who were involved in healing the Fatah-Hamas split.  In a profile on Masri, Fisk writes that the Masri family, a respected family of Palestinian merchants, has a long history of involvement in the Palestinian resistance. Masri remembers that as a small boy he demonstrated against British rule in Palestine. Fisk begins his story:

Secret meetings between Palestinian intermediaries, Egyptian intelligence officials, the Turkish foreign minister, Palestinian President Mahmoud Abbas and Hamas leader Khaled Meshaal – the latter requiring a covert journey to Damascus with a detour round the rebellious city of Deraa – brought about the Palestinian unity which has so disturbed both Israelis and the American government. Fatah and Hamas ended four years of conflict in May with an agreement that is crucial to the Palestinian demand for a state.

A series of detailed letters, accepted by all sides, of which The Independent has copies, show just how complex the negotiations were; Hamas also sought – and received – the support of Syrian President Bachar al-Assad, the country’s vice president Farouk al-Sharaa and its foreign minister, Walid Moallem. Among the results was an agreement by Meshaal to end Hamas rocket attacks on Israel from Gaza – since resistance would be the right only of the state and agreement that a future Palestinian state be based on Israel’s 1967 borders.

The final unity agreement was signed in Cairo, Egypt, May 4.  Seven representatives from each part of Palestine were involved in drawing up the final agreement. Fisk describes these participants as people who “will be in future Palestinian history books”.

In the two groups are:

From Gaza, Eyad Sarraj (who missed the May 4 meeting in Cairo because he was ill); Maamoun Abu Shahla (member of the board of Palestine Bank); Faysal Shawa (businessman and landowner); Mohsen Abu Ramadan (writer); Rajah Sourani (head of Arab human rights, who also did not go to Cairo); ‘Abu Hassan’ (Islamic Jihad member who was sent by Sarraj); and Sharhabil Al-Zaim (a Gaza lawyer).

The unity agreement and the subsequent decision to to seek full recognition as a member of the United Nations in September, has generated an Israeli aggressive diplomatic campaign to block the Palestinian effort . The campaign will fail. The votes are there in the UN. Only a US veto could block recognition.

Apparently, the US is alone among nations willing to join Israel in its plot–ascribed, as usual, to “security concerns”–to keep the Palestinians from UN membership.

It is difficult not to conclude that under its current right-wing government, Israel appears to be trapped in a fear-driven mindset, the same mindset which has sustained the Zionist dream since the 19th century. Look no further for verification of this mindset than Prime Minister Benjamin Netanyahu’s speech last month before the US Congress.

Speaking to lawmakers who were enthusiastically cheering him, Netanyahu reached back to the 19th century for a quote from Zionist English novelist George Eliot, who described a future Jewish state as one that would “shine like a bright star of freedom amid the despotisms of the East.”

Israel as a haven for homeless Jews was the initial Zionist goal. But an Israel where Jews would be living “amid the despotism of the East”, is not a recipe designed to promote neighborliness.

In his article, Zionism from the Standpoint of Its Victims (reprinted in The Edward Said Reader), Edward Said identified the role of Zionism as an ideology that built a wall of separation between the “enlightened West” and the “despotic” East.

Zionism in the postindustrial West has acquired for itself an almost unchallenged hegemony in liberal “establishment” discourse, as because in keeping with one of its central ideological characteristics, Zionism has hidden, or caused to disappear, the literal historical ground of its growth, its political cost to the native inhabitants of Palestine, and its militantly oppressive discriminations between Jews and non-Jews.

The US Congress cheered repeatedly as Prime Minister Netanyahu endorsed what Edward Said described as “militantly oppressive discriminations between Jews and non-Jews”.

They should know better. Their churches and synagogues should have taught them better. But what are we to expect from a brainwashed body of elected representatives who live in a western culture that is blissfully ignorant of the Palestinian narrative.

Their brainwashing is courtesy of a Zionism which has successfully prevented Palestinians from “narrating” their history.

Nigel Parry, a co-founder, along with Ali Abunimah, of the Electronic Intifada, wrote on that website, September, 26, 2003:

When I think of Palestinian American academic and writer Edward Said, one phrase he penned comes to the fore. It was the title of a piece he wrote for The London Review of Books in February 1984, “Permission to Narrate”.

These three words described what Said felt was most denied to the Palestinians by the international media, the power to communicate their own history to a world hypnotised by a mythological Zionist narrative of an empty Palestine that would serve as a convenient homeland for Jews around the world who had endured centuries of racism, miraculously transformed by their labor from desert to a bountiful Eden.

In his article, Zionism from the Standpoint of its Victims, Said wrote of an honorary degree granted in 1978 to Menachem Begin by Northwestern University in Evanston, IL.

Said was distressed over:

.  . .  .  the symbolism of Menachem Begin, a former head of the Irgun terror organization, in whose part are numerous (and frequently admitted) acts of cold blooded murder, being honored as Israeli premier at Northwestern University in May 1978 with a doctorate of laws honoris causa; a leader whose army a scant month before had created 300,000 new refugees in South Lebanon, who spoke constantly of “Judea and Samaria” as “rightful” parts of the Jewish state (claims made on the basis of the Old Testament and without so much as a reference to the land’s actual inhabitants); and all this without-on the part of the press or the intellectual community-one sign of comprehension that Menachem Begin’s honored position came about literally at the expense of Palestinian Arab silence in the Western “marketplace of ideas,” that the entire historical duration of a Jewish state in Palestine prior to 1948 was a sixty-year period two millennia ago, that the dispersion of the Palestinians was not a fact of nature but a result of specific force and strategies.

The picture at top, a street scene in Bethlehem, was taken during the 2006 Palestinian elections by James M. Wall, who was in Palestine to cover the election.

The picture further down shows Hamas leader Ismail Hanniyeh, right, shaking hands with senior Fatah official Nabil Shaath. It was taken during their meeting in Gaza in May. It is a Reuters picture.

JAMES WALL is currently a Contributing Editor of The Christian Century magazine, based in Chicago, Illinois.  From 1972 through 1999, he was editor and publisher of the Christian Century magazine.  He has made more than 20 trips to that region as a journalist, during which he covered such events as Anwar Sadat’s 1977 trip to Jerusalem, and the 2006 Palestinian legislative election. He has interviewed, and written about, journalists, religious leaders, political leaders and private citizens in the region.  Jim served for two years on active duty in the US Air Force, and three additional years in the USAF (inactive) reserve. Jim launched his new personal blog Wallwritings, on April 24, 2008. He can be reached at:  [email protected]