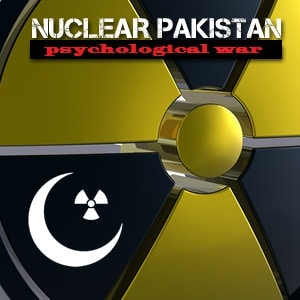 Our suspicions about ill-designs of USA and its strategic allies Israel and India concerning Pakistan’s nuclear program are now turning into reality. President Ahmadinejad’s recent statement that USA has evil designs against our nuclear program has further heightened our anxieties. Psychological war on our nuclear program was ignited by US government and Jewish controlled think tanks and media sometime in 2004 and became more and more vicious with each passing year. Pakistan’s nuclear program was made to look unsafe after overplaying threat of terrorism, which was also inflamed by USA and its allies by occupying Afghanistan and then pushing terrorism into Pakistan.

While launching of military operations by the Army in Waziristan at the behest of USA led to emergence of Pakistani Taliban, two drone attacks in Bajaur Agency in 2006 instilled hatred against the Army particularly when October strike on a seminary killing 80 students was wrongly owned by the Army. Brutal military action against inmates of Lal Masjid and Jamia Hafza in July 2007 triggered recruitment of young Taliban. It also ignited spate of suicide bombings in cities. Thereon, it became easy for the senior members of TTP to motivate young boys aged 12-16 years to become suicide bombers.

Tehrik-e-Taliban Pakistan (TTP) established in December 2007 under deceased Baitullah Mehsud, which has its tentacles in all seven tribal agencies as well as in settled areas of Khyber Pakhtunkhwa, Swat, Malakand, South Punjab, Pashtun belt of Balochistan and its long arm can reach any part of Pakistan is of chief concern for Pakistan but of no concern to USA. Several foreign agencies are providing massive funds, weapons, equipment, explosives, training facilities, guidance and manpower reinforcements from Afghan soil to TTP since they desire this force to possibly defeat or as a minimum contain bulk of Army.

But for foreign support in huge quantities, it would not have been possible for the TTP to rebound after its backbone had been broken in the two decisive battles of Bajaur and South Waziristan in 2009. Footprints of foreign hands were clearly seen in all the regions that were recaptured from the militants. In the Bajaur battle which raged from August 2008 till February 2009, large number of Tajik and Uzbek fighters supplemented Mullah Faqir Muhammad force. Even now Afghans are involved in Bajaur, Mohmand and Dir.
Once the main bases of militants were dismantled and its leaders sought refuge in Afghanistan, the conspirators then shifted terrorism to major cities. This was made possible after the induction of Blackwater in 2008. Several security companies like Dyncorps cropped up in capital cities. Dozens of militant groups affiliated with TTP and al-Qaeda and linked with Blackwater are wreaking havoc in cities.

While the people have not come out of the shock of two attacks in May, the foreign and local media is adding to their apprehensions by floating rumor balloons of despondency and trying to undermine the capabilities of armed forces. An impression is being created that the military is incapable of safeguarding our vital interests. Great majority in Pakistan distrusts USA and suspect that it will again strike Pakistan to denuclearize it. They are not convinced with John Kerry assurances that the US is not interested in Pak nukes particularly after NATO Secretary General’s statement that it is the collective responsibility of international community to secure nuclear assets of Pakistan.

Despite multi-layered system of security evolved by Pakistan which is second to none, doubts are still being aired by vested interests that Pakistan’s nuclear program is unsafe and needs to be secured before they fall into wrong hands. Although our leaders are claiming that no harm can befall upon our strategic assets, in my humble view the threat is of different nature about which our policy makers have given no thought. Their eyes are fixed on local terrorists about whom the US is repeatedly ringing alarm bells.

The biggest threat is not from US or Indo-Israeli direct assault, or from local terrorists who are anti-American, but from foreign backed terrorists trained to undertake special operations, like the ones against GHQ and Mehran Base. Another possible dangerous threat is from pro-American elements or sympathizers of foreign sponsored terrorists working inside nuclear setups who may be bribed to steal fissile material and fuses and pass them on to wrong people. One must not forget that CIA had been able to buy the loyalties of several scientists working in a nuclear plant in 1990s. Brig Imtiaz working in ISI had busted the band on the payroll of CIA, after he accidentally found out from a girl ditched by one of the scientists belonging to this group.

I am certain that the heavy CIA network established in Pakistan since 2010 must be continuing with its efforts to cultivate scientists, officials and security guards employed in sensitive organizations. The theme of nukes falling in hands of religious extremists was purposely floated to provide smoke screen to its own covert actions. USA, Israel and India are the actual thieves bent upon stealing or destroying our nukes. Varieties of contingencies have been prepared to destroy, steal or overpower the arsenal. The noose has been sufficiently tightened and the thieves have prowled closer to the intended sites and believably have stealthily encircled them.

After performing the gory act, irrespective of marginal success or complete failure, red alert will be sounded and the whole blame put on al-Qaeda/affiliated groups. The UN and the world will be ready to accept US contention since the latter has already poisoned the minds of world power centers. Our rulers too would promptly blame local militant groups. The UN will then come into action and will seek immediate closure of our nuclear program and demand transfer of all the nukes along with fissile material to safer location outside Pakistan.

With regard to the last option of destruction by drones and bombers, or physical occupation by US Special Forces, complete homework has been done. The only thing left is to decide the date and time. In my reckoning, this reckless option may coincide with final phase of withdrawal of forces from Afghanistan. God forbid, if our adversaries succeed in their evil designs, that will be day of mourning for Pakistan and a day of rejoicing for USA, western world, Israel and India.

Pakistan Army managed to get out of the deathtrap laid by its adversaries in Swat and South Waziristan. USA has now prepared another deadly deathtrap in North Waziristan and is once again trying to lure in Pak Army with a hope that this time it will get trapped. It is only when major portion of our combat divisions get embroiled in the war in northwest that India will make its Cold Start doctrine operational on the weakened eastern front. 5/2 and 5/22 incidents have already helped our adversaries in creating despondency, in discrediting armed forces and intelligence agencies and in spoiling civil-armed forces relations. Economically, Pakistan has become dependent upon IMF and US aid. Politically it is polarized and dysfunctional. Socially the society stands divided. Pakistan has been brought to this abysmal situation under an orchestrated program to make it helpless. Unfortunately our media stalwarts, PML-N, Asma Jahangir and even higher courts instead of defeating foreign propaganda are providing strength to foreign agenda against armed forces.

Since 2007, the US is trying to remove highly enriched uranium from a Pakistani research reactor. While I pray that our security forces are able to thwart hostile attempts made on our nuclear arsenal and delivery means and are able to safeguard the frontiers against foreign aggression under such insalubrious environments, what I am worried is that we have still not identified our foes and snakes in the grass and taken preventive measures. Unless we guard against the designs of our foes pretending to be friends and Mir Jaffars, we will not be able to confront the worst threat which is looming over Pakistan’s horizons.

The writer is a retired Brig and a defence analyst. Email: [email protected]