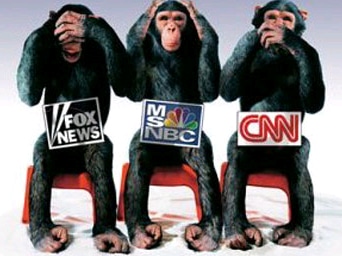 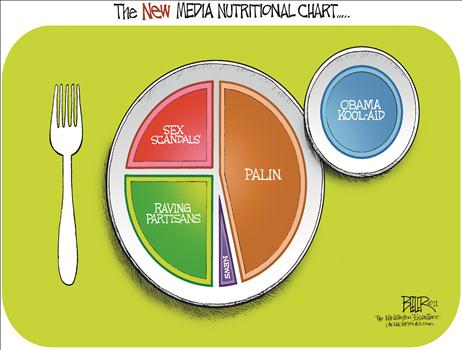 The Establishment Controlled Mainstream Media Rules America with Raving Right Wing Partisans, Sex Scandals, Sarah Palin and a Steady Dose of Obama Kool-Aid While the Real News Can ONLY be Accessed Through the Internet

There is a reason I do not have a television set and seldom read the Mainstream Media. The reason is I’m a truth seeker and truth teller and I, and million of Americans, now realize that we cannot find the truth in the establishment controlled mainstream media ~ and that President Obama answers to Wall Street and the mainstream establishment.

Here’s a perfect example:  a short synopsis of 5 WikiLeaks 2011 world wide news revelations that the American mainstream media is virtually ignoring, courtesy of AlterNet’s Rania Khalek; “5 WikiLeaks Hits of 2011 That Are Turning the World on Its Head — And That the Media Are Ignoring“:

Meanwhile in Afghanistan, we have Bagram prison ( which is bigger than Guantanamo ) where some 1,700 detainees are being held with no charges, no trial, no way to prove their innocence despite a Marine Corps general’s 2009 report saying many should be released.

Thus far, the report, issued May 10 by New York and Washington, D.C. based non-profit organization Human Rights First (HRF), has been ignored by almost all the mainstream print and broadcast news media.

And then we have Libya where The Pentagon and its NATO partners are engaged in one of the most obvious and intensive propaganda ploys in their military operations since the days leading up to the “Coalition of the Willing” attack on Iraq.

“ There has been no mention by the Western media, in their zeal to promote the Pentagon and NATO line, that some Libyan rebels acceded to the government’s offer of an amnesty if the rebels gave up their weapons. After rebels handed over their weapons in Misrata and in the western mountains, NATO increased its bombings of the two regions…Neither is there mention of the disposal of the bodies of the victims of rebel violence: the mass burning of bodies of victims to erase any trace of crimes against humanity committed by the U.S.- and NATO-backed rebel forces…As we have seen in Libya, and before, in Iraq, Afghanistan, Pakistan, Lebanon, Gaza and the West Bank,Darfur, Rwanda, Somalia, and Yemen~modern-day corporate journalists are mere stenographers for their corporate masters who, in turn, control the puppet strings for the marionettes in Washington, Brussels, London, Paris, Rome and Berlin.” Red Full Article

Meanwhile, The financial cost of the U.S. campaign in Libya is set to exceed $750 million, according to a leaked Department of Defense Memo.

The ‘eyes-only’ DoD dossier said the U.S. had already spent $664 million in Libya by mid-May – a running cost of $60 million a month since the bombing began in March. At the current rate of spending, the U.S. will have to shell out at least an extra $274 million till the end of the current 90 day no fly zone extension period – bringing total expenditure to a minimum of $938 million.

And why is all of this information available to the world and American public, if they choose to read it?

Because, as Glenn Greenwald ( Salon ) writes:

“ The reason ~ the only reason ~ we know about any of this is because WikiLeaks (and, allegedly, Bradley Manning) disclosed to the world the diplomatic cables which detail these conflicts. Virtually the entirety of the Post article — like most significant revelations over the last 12 months,especially in the Middle East and North Africa~ are based exclusively on WikiLeaks disclosures.”

The only antidote for the shameless propaganda and hypocrisy of the Mainstream Press is transparency and the truth ~ which the Obama administration and the establishment continually avoid ~ because Americans don’t demand it or perhaps don’t want to hear it. .

As such, the only Presidential candidate who is a veteran and opposes not only our illegal occupations of Iraq and Afghanistan as well as our now illegal participation in regime change in Libya is Ron Paul. The mainstream press is scared to death of a Ron Paul presidency which is why they ignore him ~ but the American public is increasingly responding to his anti-establishment message. True conservatives, Independents and even progressives, who are no longer drinking the Obama Kool-Aid ~ such as myself and Justin Raimondo ~ see Ron Paul in a far different light during these turbulent times when truth and transparency are at a premium.

“As libertarianism becomes more visible, politically, and gains ground in the GOP, the enemies of freedom are poised – on both the right and the left – for the attack. Libertarians have never had to deal with this problem before, in the main because their movement was considered marginal, if it was considered at all. Today, however, the situation is quite different: a wave of “anti-government” (i.e. pro-freedom) sentiment is sweeping the country, and the realization that libertarians were the original tea-partiers – coupled with the electoral success of that populist upsurge – has the Establishment in a panic. What we’re seeing is a two-pronged, left-right attack on libertarians, with the initial forays in the foreign policy realm.

The main thrust of the attack is naturally directed at the leader of the libertarian movement, the man who has done the most to make libertarianism a significant political force in the modern world, and that man is Rep. Ron Paul (R-Texas). Ron has single-handedly raised the profile of the movement way beyond what anyone imagined only a few years ago. A lot of this has to do with Ron’s prescient warnings about the state of the economy, and the bursting of the real estate bubble, which have given him the kind of authority he never enjoyed in all the years spent crying in the wilderness. However, Ron’s prescience isn’t limited to economics: unlike most conservatives, Ron was clear from the very beginning that our foreign policy of global intervention would blow back in our faces some day, and the 9/11 terrorist attacks confirmed his view in a way that was not, at first, readily apparent.

Yet Ron kept making this point, even in the wake of the war hysteria that followed the attacks, and ten years anon – as a war-weary and dead broke America staggers and seems about to fall – his views are seen as prophetic rather than marginal….” See complete article ~

The mainstream media is on the verge of irrelevance for the truth has revealed that it is mainly a tool of the establishment. The more we seek the truth, the more this discrepancy will become obvious ~ as well as those who misuse it. Wikileaks, as such, is providing tough independent media for those who actively seek truth and transparency ~ establishment and main stream media be damned.

About the Author: Allen L Roland is a Freelance Alternative Press Online columnist and psychotherapist. He is a practicing psychotherapist, author and lecturer who also shares a daily political and social commentary on his web site at AllenRoland.com.  He also guest hosts a Truthtalk, a national radio show that airs monthly. He is available for comments, interviews, speaking engagements and private consultations via email at [email protected].