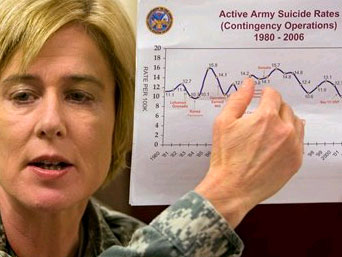 The Army released suicide data today for the month of May.  Among active-duty soldiers, there were 21 potential suicides:  one has been confirmed as suicide, and 20 remain under investigation.  For April 2011, the Army reported 16 potential suicides among active-duty soldiers.  Since the release of that report, two cases have been confirmed as suicide, and 14 cases remain under investigation.

During May 2011, among reserve component soldiers who were not on active duty, there were six potential suicides:  none have been confirmed as suicides, and six remain under investigation.  For April 2011, among that same group, there were 11 total suicides (two additional suicides for April were reported after the initial report).  Of those, four were confirmed as suicide and seven are pending determination of the manner of death.

The Army continues to focus on ensuring its leaders have the training and knowledge to address high-risk behavior and prevent suicide.  Company command teams are provided training on the requisite skills to identify and mitigate high-risk behavior.  “When it comes to suicide and other high-risk behavior, we cannot afford to relearn past lessons.  Incumbent commanders must continue to familiarize new leaders with the principles of leadership in garrison,” said Gen. Peter Chiarelli, Army vice chief of staff.

Soldiers and families in need of crisis assistance can contact the National Suicide Prevention Lifeline.  Trained consultants are available 24 hours a day, seven days a week, 365 days a year and can be contacted by dialing 1-800-273-TALK (8255) or by visiting their website at www.suicidepreventionlifeline.org .

The Army’s comprehensive list of Suicide Prevention Program information is located at www.preventsuicide.army.mil .

Information about Military OneSource is located at www.militaryonesource.com or by dialing the toll-free number 1-800-342-9647 for those residing in the continental United States.  Overseas personnel should refer to the Military OneSource website for dialing instructions for their specific location.

Information about the Army’s Comprehensive Soldier Fitness Program is located at www.army.mil/csf .

The Defense Center for Excellence for Psychological Health and Traumatic Brain Injury (DCoE) Outreach Center can be contacted at 1-866-966-1020, via electronic mail at [email protected] and at www.dcoe.health.mil .

The website for the Tragedy Assistance Program for Survivors is www.TAPS.org, and they can be reached at 1-800-959-TAPS (8277).