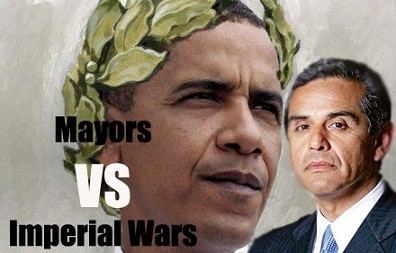 Not that the White House will listen, but the U.S. Conference of Mayors tomorrow (Monday, June 20th) may actually conclude its proceedings in Baltimore with an historic vote affirming a resolution to spend at home the $125-billion now being lavished annually on the Middle East wars. “That we would build bridges in Baghdad and Kandahar and not Baltimore and Kansas City, absolutely boggles the mind,” the AP quotes Mayor Antonio Villaraigosa of Los Angeles as saying.

The Conference, which speaks for 1,200 mayors, expresses the pain felt by city officials as urgent domestic needs have been long scuttled so that America’s imperial presidents can wage wars in the Middle East to control the region’s oil. President Obama is no exception as he vastly expanded the war in Pakistan and began fighting two other wars in Yemen and Libya illegally without Congressional authorization.

By the way, if the Iraq war was not about the threat of Saddam Hussein’s WMD, what was it about? The answer may be found in a New York Times report of July 3, 2008, which described the deal between Hunt Oil of Dallas and Kurdistan’s regional government in September, 2007, over the infuriated protests of Iraq central government officials in Baghdad.

Hunt’s chief executive officer, The Times noted, is Ray Hunt, a close political ally of Bush, and who “briefed an advisory board to Bush on his contacts with Kurdish officials before the deal was signed.” Another big winner, of course, was Bush Vice President Dick Cheney’s Halliburton, which landed lucrative no-bid contracts in Iraq over the objections of Army Corps of Engineers officials and others. Etc., etc., etc. In short, the nation was mobilized to waste three trillion dollars for war and pay the terrible price of 5,000 U.S. dead and 30,000 wounded to enrich defense and oil sector corporations. No matter that some 1 million Iraqis were killed, probably at least as many wounded, and two million made refugees and the country left in ruins.

Can it be just coincidental that the first oil contract signed in conquered Iraq enriched Bush’s close friend? Or that Halliburton, formerly headed by Bush’s Vice President, reaped no-bid contracts worth billions?

Better late than never, but where was the protest of the U.S. Conference of Mayors ten years ago when the predatory hawks turned their threats into hot wars and began destroying Baghdad and Basra? Only now, after their own cities have been driven to the brink of ruin (and some, like Camden, N.J., over it) do they politely lash out at Federal spending for war. If Washington had not cut back on aid to the cities would they be taking this vote? Where were they when the Secretary-General of the United Nations called the Iraq invasion illegal? Do they object now because the loss of Federal funds diverted to war played a big role in forcing local governments to lay off 446,000 jobs since Sept., 2008?

n June 18, The reporter Michael Cooper ticked off a litany of municipal woes that included:

As Mayor R.T. Rybak of Minneapolis told The Times, cities are being forced to make “deeply painful cuts to the most core services while the defense budget continued to escape scrutiny.”

To sum up, there are two Americas here: there’s the powerful military-industrial-CIA complex that dictates policy and is designed to enrich the Pentagon and the misnamed “Defense” (i.e., Aggression) sector contractors. Their profits have never been higher. Same for the run-up in profits by ExxonMobil and Shell, etc., to stunning, all-time highs. (Indeed, the trillion a year it takes to operate the Pentagon is costlier than what all 50 states combined spend to meet the real needs of the public.)

Then there’s the America made up of the miserable majority who yearn for peace (as shown by every poll) and a chance to educate their children and to earn a good day’s pay for an honest day’s work—and, by the way, not to have their youth sacrificed on the altar of “defense.” As James Carroll wrote in “House of War”(Houghton Mifflin)about the former U.S.-Soviet confrontation: “The American national security elite had no real interest in bringing either the Cold War or its engine, the arms race, to an end. But that was not true of the people as a whole, and it was the people who forced the change…”

That’s still true today—and that means it’s up to each and every one of us to speak out louder than ever against President Obama’s imperial policies. We wait to hear how the mayors will vote tomorrow. It could be an historic occasion.

About the writer: Sherwood Ross is a publicist for good causes and director of the Anti-War News Service. To contribute or comment reach him at [email protected]