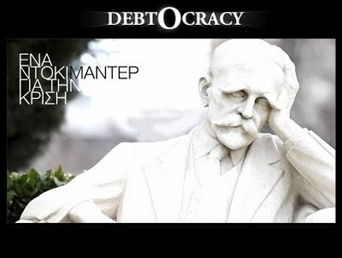 Documentary Tells Truth; Take the Time to Watch it All

Why do the working class people of world need to pay the scam-created money of banksters? Because their governments are too corrupt to say no.
I have exchanged E-mail with several sharp and honest friends, all of whom insist that unless debt-money creation is wiped out totally, nothing will be reformed, the following is from an exchange of letters and speaks for itself:

Amos Bruce, now deceased, a cab driver in St. Louis wrote the FED and asked this question, “You say you and the government can create ALMOST any amount of money. This must mean that there is a limit to how much you can create.

What is it limited by?”

The FED wrote him back and said, “It is limited by two things, the speed of the printing presses, (computers?) and the rate at which you will accept it.”

Amos then wrote a letter to Congressman Ron Paul, who was the chairman of Banking and Finance for Congress. Amos asked Congressman Paul, “If the U.S. Government and the FED can create almost any amount of money, is there any REAL reason why we should have to pay taxes on April l5th?”

Congressman Paul wrote back and said, “Of course not, but if we didnt then the people would know what kind of counterfeiting machine we have.”

Maynard Keynes, the English economist, maybe the most highly esteemed economist of the twentieth century wrote a book after the First World War, it was called, ‘Consequences of the Peace.’ He addressed the monetary system is this book. Perhaps he summed up the issue of taxes when he said.

“If we don’t police this system thru taxation, then the fraud upon the people can be concealed no longer.

A small fact of history not widely taught, but one that we were forced to repeat since we did not heed. This was previous to the Federal reserve. Americans are too trivial to be citizens rather than subjects—somehow the citizens need to establish “honest money:”

1881: President James A. Garfield (The 20th President of the United States who lasted only 100 Days) stated two weeks before he was assassinated,

“Whoever controls the volume of money in our country is absolute master of all industry and commerce…and when you realize that the entire system is very easily controlled, one way or another, by a few powerful men at the top, you will not have to be told how periods of inflation and depression originate.”

For all the good he has done for many years, Ron Paul, does not really nail the sons of Mammon for what they have created, and we fools have allowed.

Do you remember your first job?

The Manila Times November 28, 2010 | RAVANES, CARLA BIANCA Because I do. I remember clearly being excited, waking up earlier than usual fixing my baon and looking forward to beginning the day with which the rest of my life would begin.

Just like every fresh graduate who did OK in college, I was ready for freedom. The world was finally my oyster.

No more tests, no more papers and no more professors who pushed me around, always demanding for something.

I was on top of the world . . . until I broke the coffee machine.

There were many other moments like that following that jarring incident: figuring out how to use Photoshop on my first day, running around Muntinlupa putting up billboards illegally, passing out flyers in the hot sun and running errands on a tight schedule in the middle of a highly crowded MRT somewhere in Guadalupe.

Brave the rain, brave the storm, brave the heat, you had a deadline to meet and targets to reach.

All of which you did not expect to do the moment you land your first job as a marketing associate. But these are the things you experience, and in between coffee runs and a long list of to-dos, you wonder if anyone actually went through the same things you did. howtousephotoshopnow.net how to use photoshop

My answer came three years later in the form of a book-truly great things come in small packages.

Going Up by Yay Padua-Olmedo reinforces that all of us went through the same things at the beginning of our climb in the corporate ladder.

In Going Up, Padua-Olmedo shares what she went through at the beginning of her very accomplished, career which led her to outshine the rest in a popular TV station and in one of the biggest multinationals in the country. She then moved on to share these experiences with her students in Southville Foreign University (sfu).

It was in SFU that I had the pleasure to become one of Ms. Yay’s (as we all fondly call her) students. She didn’t only welcome us to the wonderful world of Advertising but she also encouraged us to pursue our other passions and for me, that was writing.

Going Up, in my opinion, should be read by everyone in the corporate world, because in it, wisdom is founded about the workplace challenges that nobody talks about.

The experiences that she shares in the book teaches us how to deal with those tough first few years where we are pushed to our limits by demanding bosses, almost impossible to do tasks and issues that question the values that we grew up with.

In a way that only Ms. Yay could, she delivers the real deal and offers a better way to handle raucous situations we experience every day. Ms. Yay pushes her readers to take the high road and not to give up on the morals and values we have all grown up with.

And unlike most business books that I have read, Ms. Yay does not insist on simply “fitting in” nor does she give us a set of general rules that would allow us to climb the ladder faster than one says promotion.

Instead, Ms. Yay lets us in to the real definition of success, one that is not measured by the material things we own, or how many awards we receive. Instead, she shares with us a different way and a better way of paving our own unique roads in the concrete jungle where dreams are made of (cheap pun, but best way to describe it!) One of my favorite parts of the book is when Ms. Yay candidly shares the best asset an employee could ever have and it’s one that cannot be reflected by our earlier achievements in school, our last names or the schools that we came from.

Ms. Yay’s book encourages humility and in a world of “me-centrics,” it’s one that stands out.

She takes us out of what we’ve been accustomed to and forces us to think beyond the lines of old-school “I-am-the-boss” thinking into a new age way of accepting faults graciously instead of actively defending ourselves, being secure instead of constantly looking over our shoulder and simply letting our No. 1 Storyteller to be the one to map the story of our lives. here how to use photoshop

When asked what she had in mind when she was writing the book, Ms. Yay says, “[I hope my readers would realize] that they are not the center of the universe and only one among the many who join the workforce everyday-so they should enter in with a teachable heart, willing to learn the ropes, ready to have their hands dirtied, not taking offense when corrected. And that all of these are necessary for one’s growth just like a plant, which needs constant pruning to turn into a beautiful vine. God has given each one a gift one must discover and nurture. Couple that with your dream and what you’ll have us that burning desire to persevere no matter the obstacles.” Ms. Yay offers a radical way of performing in the office one that will encourage instead of tear down those around you.

Ms. Yay firmly believes that, “God has a wonderful plan for everyone and that all of his children are covered by heaven’s warranty” so there is nothing to fear and everyone “can perform as He purposed them to perform.” Ms. Yay, who speaks honestly through her own experiences tell us that it is possible to live a life of integrity in the workplace. And since I’ve had the privilege of knowing Ms. Yay firsthand, I know that she doesn’t merely preach it she lives a life that reflects it.

So if you’re in the middle of your first job and dreading tomorrow, you may want to pick up this book and see that it does get better.

But maybe before you do that, you should grab that coffee first.