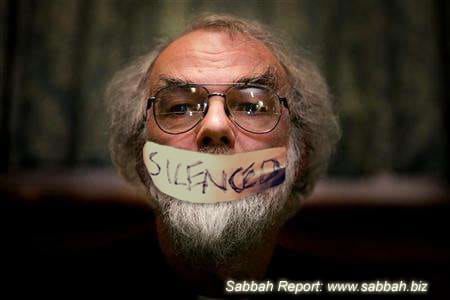 Angry Holy Land Christians tell him “We need advocates for the truth.”

Archbishop Williams’s comments about Bethlehem were “particularly faulty and offensive”, according to Rifat Kassis, especially his claim that Muslims coming into the Bethlehem area, where space is limited, was forcing Christians to leave.

Kairos Palestine, the voice of Palestinian Christians, has given the Archbishop of Canterbury a strong ticking-off for remarks he made during a BBC interview.

Rifat Kassis, co-ordinator of Kairos Palestine, said he was “deeply troubled” by the Archbishop’s “inaccurate and erroneous remarks” about the situation of Christians in the Middle East. He called the Archbishop’s failure to mention the Israeli occupation and the regime’s oppressive policies “shocking”.

In a letter to the Archbishop he said: “We were deeply saddened by your declarations because we know that Your Grace is well informed… and you know very well that in the Bethlehem area alone there are 19 illegal Israeli settlements (such as nearby Har Homa built on Jabal Abu Ghneim) and the wall that have devoured Christian lands and put Bethlehem in a chokehold. You know well that only 13% of Bethlehem area is available for Palestinian use and the wall isolates 25% or the Bethlehem area’s agricultural land. Not to mention the situation of Christians in Jerusalem, which you know very well, since you should have received reports from the Anglican Bishop in the City whose residency permit was denied by the occupying power.”

Mr Kassis ended by saying: “We would like to remind Your Grace that Christian Palestinians need advocates for the truth. It is the truth, and only the truth, that will lead to peace and justice in our home.”

So what did Archbishop Rowan Williams say to the BBC http://www.bbc.co.uk/news/world-middle-east-13769747. that so infuriated his Palestinian brethren?

Apparently it was the way he talked about the ethnic cleansing of Christians referring to extreme pressure in Iraq while suggesting that the exodus of Christians from Palestine was due to “a much more un-dramatic but equally steady and strong pressure”.

Interviewer: “But that’s a strong term to use isn’t it, ethnic cleansing?”

Archbishop: “It is a strong term but I think not disproportionate where Iraq is concerned. The level of violence has been extreme.”

However, Williams seemed careful to avoid connecting the term ‘ethnic cleansing’ with Israel’s programme to dispossess and terrorise Palestinians.

The interviewer then asked:  “Do you think that the British government, other governments, should be more vocal in their support for Christians who you are seeing at the moment under great difficulty in a number of these countries?”

Archbishop: “Well to be honest I think at the moment there is quite a lot of support. And I can’t fault what’s been said by our government on this issue because I think the issue of religious freedom in general has very high priority in the Foreign Office at the moment. So I hope that continues.”

The truth is that the British Foreign Office is infested with pro-Israel placemen and has not lifted a finger for religious or any other freedoms in the Occupied Palestinian Territories.

The Archbishop continued: “Also I think people in the West know perfectly well that if foreign powers take up the cause of a minority in another country it can be utterly counterproductive.”

Was he, by any chance, thinking about the foreign powers that implanted Jewish aliens in the Holy Land in 1947 and the running sore ever since?

He went on the say: “I think there are still perhaps too few people in this country who are aware of the haemorrhaging of Christian populations from the Holy Land.   The fact that Bethlehem, a majority Christian city just a couple of decades ago, is now very definitely a place where Christians are a marginalised minority. We want that to be a little bit higher on people’s radar… “

Interviewer: “Would you see what’s happening in Bethlehem as another example of what you’ve described as ethnic cleansing?”

Archbishop: “It’s not ethnic cleansing exactly because it’s been far less deliberate than that I think. What we’ve seen though is a kind of Newtonian passing on of energy or force from one body to another so that some Muslim populations in the West Bank, under pressure, move away from certain areas like Hebron, move into other areas like Bethlehem. And there’s nowhere much else for Christian populations to go except away from Palestine.”

I’m sure that trapped and imprisoned Palestinian Christians will be relieved to hear that their misery is all down to Newtonian energy effects.

Archbishop Williams’s comments about Bethlehem were “particularly faulty and offensive”, according to Rifat Kassis, especially his claim that Muslims coming into the Bethlehem area, where space is limited, was forcing Christians to leave.

Are the Archbishop and his Anglican Church the ‘advocates for the truth’ so desperately needed?

It is not the first time the Archbishop has upset Palestinian Christians. For decades the Israelis’ game has clearly been to obstruct and paralyse Christianity in the Holy Land. When Palestine was under British mandate, Christians accounted for 20 per cent of the population. Sixty-three years of hostilities, dispossession, interference and economic ruination have whittled their numbers down to less than 2 per cent. At this rate there will soon be no Christians left in the land where Christianity was born.

And in November 2008, while Israel was planning its murderous assault against Gaza’s civilians (including the Christian community), the Archbishop of Canterbury was gallivanting with the Chief Rabbi, Sir Jonathan Sacks, on a visit to the former Nazi camps of Auschwitz-Birkenau in Poland to demonstrate their joint solidarity against the extremes of hostility and genocide.

“This is a pilgrimage not to a holy place but to a place of utter profanity,” said the Archbishop, “a place where the name of God was profaned because the image of God in human beings was abused and disfigured. How shall we be able to read the signs of the times, the indications that evil is gathering force once again and societies are slipping towards the same collective corruption and moral sickness that made the Shoah possible?”

Evil was again gathering its forces and corruption and moral sickness were on the rampage even as he spoke. And did the Archbishop and the Chief Rabbi afterwards go to sniff the stench where the name of God had been profaned in the ruins of the Gaza Strip and utter the same brave words? 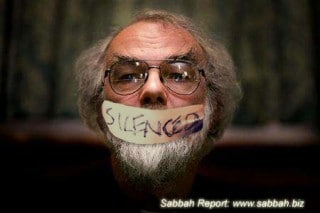 When the Church of England’s head honcho finally visited Gaza, the Israelis refused him access to the Strip but at the last minute allowed him into the shattered enclave for just one-and-a-half hours, enough time to show his face at the hospital and no more. He said nothing about his experience to the House of Lords where he has a seat and the support of a large gaggle of bishops.

This despite his claim to be “in a unique position to bring the needs and voices of those fighting poverty, disease and the effects of conflict, to the attention of national and international policy makers”, despite his declaration that “Christians need to witness boldly and clearly”, and despite his urging greater awareness of the humanitarian crisis to ensure that the people of Gaza are not forgotten.

The Archbishop’s website, however, did report how he hobnobbed with the Chief Rabbinate of Israel, paid his respects to Yad Vashem and the Holocaust, and talked with the President of Israel. There was no mention of any similar get-togethers with senior Islamic figures, leaving a question-mark over his real commitment to inter-faith engagement.

The Archbishop’s agreeing to accept the hospitality of Jewish political and religious dignitaries while they squished his wish to carry out his Christian duties in Gaza, tells us a great deal.

So is the guy a closet Zionist like so many other so-called Christians?

I’m reminded of the he words of Desmond Tutu: “Where there is oppression, those who do nothing side with the oppressor.”

“Christianity destroyed not by Muslims but by Israel.”

The Archbishop has a chance to redeem himself with the international conference on Christians in the Holy Land he plans to hold next month. For two days I’ve been asking his press office for details of delegates, keynote speakers, etc but have received nothing.  We are left to speculate. 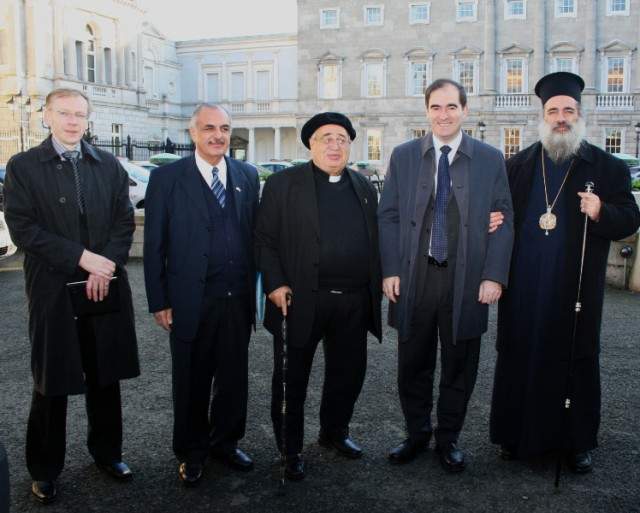 It would be nice if the conference were addressed by that excellent trio from the Holy Land Archbishop Theodosius Hanna (Greek Orthodox Church), Monsignor Manuel Musallam (Latin Catholic) and Mr Constantine Dabbagh (Executive Director of the Middle East Council of Churches)? These courageous spiritual leaders and human rights defenders toured Ireland last November to raise awareness of the situation in their homeland under Israeli military occupation and the plight of the dwindling Christian community. Their central message was simple: “We need only one thing, to be protected by the world against the crimes of Israel” (For details please see my article “No such thing as justice in the Holy Land“, 14 December 2010.)

“Christianity in the region has been destroyed not by Muslims but by Israel. Israel destroyed the church of Palestine and the church of Jerusalem beginning in 1948. Its not Muslims, has sent Christians in the region into a diaspora… Christians in Palestine are not suffering persecution, because we are not considered to be a religious community, but rather the people of Palestine. We have the same rights and the same obligations.

“We have spoken to Israel for more than 18 years and the result has been zero. We have signed agreements here and there at various times and then when there is a change in the Government of Israel we have to start again from the beginning. We ask for our life and to be given back our Jerusalem, to be given our state and for enough water to drink…  I have not seen Jerusalem since 1990.”

However, given the Anglican Church’s recent form, it wouldn’t surprise me if the conference is hosted by the CMJ (the Church’s Ministry among Jewish People). The CMJ is “propelled by devotion to God and the fulfillment of His promises to His people Israel”. In its statement of faith the CMJ says Christians have “a special responsibility to love, defend and share the Gospel with God’s historic, chosen People, the Jews”.
The CMJ’s attitude to the Israel-Palestine struggle is unhelpful to the Palestinians. For example…

That signifies approval for Israel’s continuing land-grab and lawlessness.  If CMJ recognizes the UN’s partition it should also accept the borders on which it was based.

According to Wikipedia, “CMJ has always adopted a Zionist position, and expressed the view that the Jewish people deserved a state in the Holy Land decades before Zionism began as a movement.”