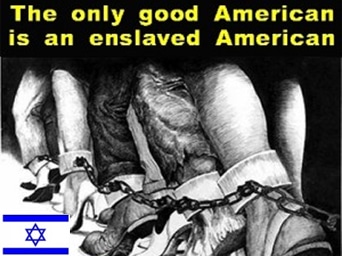 Americans have to make a hard decision on what kind of country they want to have.

There were two stories last week that illustrate just how bad the situation has become in the wake of the virtual capitulation by President Barack Obama during Netanyahu’s triumphal May visit to Washington, the first time in recorded history that a small nation with less than eight million citizens has subjugated a much larger country with a population of more than 310 million.

The issue of Israel is of critical importance to the antiwar movement, as frequenters of this website are surely aware. This is because Israel and its lobby in the United States have succeeded in so intertwining their interests with those of the United States that whenever Prime Minister Benjamin Netanyahu sneezes four hundred congressmen say “Gesundheit!” What Israel does has consequences for every American citizen, and not only because Tel Aviv is the largest recipient of US economic and military assistance.

It is indisputable that Israel and its friends in the White House and Defense Department played a major role in creating the lies and generating the momentum in the drive to war against Iraq in 2002, a conflict that continues to claim American casualties and which has left Iraq in ruins. Now the push is on to “do something” about Iran. There have been a number of bills in Congress that stop just short of declaring war on the Mullahs and there are signs that the Israeli government might be planning a military action before the end of the summer. Does anyone doubt that the United States would immediately be drawn into such a conflict, with disastrous consequences in terms of a terrorist response and energy prices that would skyrocket? It would be a particular misfortune in that there is no actual evidence of the alleged casus belli that Iran has a nuclear weapons program, the US is not threatened by anything Tehran does or could possibly do, and John Citizen has absolutely nothing to gain and everything to lose by Washington going to war.

There were two stories last week that illustrate just how bad the situation has become in the wake of the virtual capitulation by President Barack Obama during Netanyahu’s triumphal May visit to Washington, the first time in recorded history that a small nation with less than eight million citizens has subjugated a much larger country with a population of more than 310 million.

The first story is about the annual meeting of Ralph Reed’s evangelical Faith and Freedom Coalition in Washington on June 3rd and 4th, which included cameo appearances and a number of speeches by Republican presidential candidates. Support for Israel was on the menu du jour in nearly every speech and for every panel. It dominated the conference. One panel had as its subject “Israel: surrounded yet undaunted in the face of evil.” Richard Land, president of the Southern Baptist Convention’s oddly named Ethics and Religious Liberty Commission spoke for fifteen minutes about Israel, saying “If we want God to bless America, then we have to bless the Jews. God gave that land to his chosen people forever. That issue is settled by God almighty.” Land called Obama “…the worst president of the United States that Israel has ever had,” an assertion that probably had much deeper meaning than he intended. Danny Danon, a Knesset member for the Likud Party, warned President Obama “Take your hands from Jerusalem! Jerusalem will remain under Jewish control forever!”

Among the Republicans, only Mitt Romney failed to mention Israel, but he had already denounced Obama for “throwing Israel under the bus.” Godfather Pizza magnate Herman Cain demonstrated complete ignorance on basic Middle Eastern issues when he revealed in an interview that he did not understand the meaning of “right of return.” But he reportedly “blew the audience away” with his expressions of support—“You mess with Israel and you mess with the United States of America”—and then flew up to New York City to attend a Salute to Israel rally in Central Park. Michele Bachmann produced a standing ovation when she cited a “shocking display of betrayal of our greatest friend and ally Israel.” She added “I stand with Israel…President Obama…does not speak for us on the issue of Israel.” Tim Pawlenty enthused “We need a president of the United States who stands shoulder to shoulder with our great friend Israel.”

The second story comes from a reported visit by Illinois Republican Senator Mark Kirk to Israel. The coverage of the visit by Josh Rogin (isn’t he an actor?) on the Foreign Policy website, is headlined as a “new policy approach.” The story features a photo of a beaming Kirk standing next to a similarly glowing Netanyahu, demonstrating beyond all doubt that excellent dentistry is available in both countries. Kirk, who appears to have some problem in keeping his resume straight regarding his military record, traveled to the Middle East on an “intense fact finding” mission funded by you and me, unfortunately.

Senator Kirk envisions a “host of ways” to bring about a lot more Israeli-US defense cooperation, suggesting that the $3 billion plus per year they already get is inadequate to their needs. He would like to have the Israeli navy assist the United States navy in patrolling for pirates in the Indian Ocean. Sounds good, doesn’t it? The world’s mightiest navy with eleven carrier battle groups needs help from Israel’s three corvettes to patrol the Indian Ocean. Ah, but there must be a catch and I would guess that since Israel’s navy is inadequate to the task, the United States will generously pay to muscle it up, provide a few new vessels and maybe some advanced weapons systems. Probably also cover all the operating costs. It makes perfect sense as everyone knows that Israel is vulnerable to attack from the sea, particularly by car ferries manned by ferocious Turks wielding sticks delivering aid to the Gazans.

Kirk would also like to have the Defense Department consider the purchase of Israel’s Iron Dome defensive missile system to protect “our borders” in case either the Canadians or Mexicans decide to attack with Katyusha rockets. Iron Dome was largely developed with US funding but the sales would all go to Israel. Ka-ching!, just listen to that cash register opening up. Kirk would also like to have NATO buy the system to protect against somebody somewhere at some time who might be considering something bad. Ka-ching! Ka-ching!

But Senator Kirk’s brilliant insights into the state of the Middle East do not end with the Israeli navy and buying needful things. Kirk advocates ending US funding to the Palestinians as long as Hamas is involved and also terminating it anyway if the Palestinians dare to declare statehood in the UN. Or if they fail to curb “anti-Israeli incitement in Palestinian schools.” If those three reasons won’t do, there are almost certainly others. Oh yes, and Kirk wants the Turkish humanitarian relief organization IHH, which supported the flotilla bringing aid to Gaza in May, declared a terrorist organization.

Kirk concluded his visit by making a video with Jewish Agency Chairman Natan Sharansky on human rights in Iran. Sharansky recited a list of dissidents in prison in Iran. He apparently misplaced the list of dissidents in prison in Israel, which would be a whole lot longer, as would the corresponding list of those shot and killed by Israeli security forces on the West Bank and in Gaza.

I really don’t care what America’s hypocritical evangelicals do except insofar as they waste my tax money on their divinely sanctioned wars and demand my grandson for cannon fodder. The fact that they ignore Christian teachings of love and forgiveness and seem to gravitate instead towards Old Testament bloodshed because of their skewed and ridiculous interpretation of what they think it says in the bible is a symptom of their ignorance and hubris. That a US senator goes to Israel to genuflect and kiss the Netanyahu ring is not that surprising either. But it would be a mistake to dismiss Ralph Reed’s followers and the nincompoops that seem to proliferate in Congress because of their witlessness and hypocrisy. People like Land and the gaggle of Republican wannabes are both powerful and dangerous. The evangelicals appear to control who will be the next Republican presidential nominee, and their choice might well turn out to be a Bachmann or a Palin, with terrible consequences for the United States if they are elected and are able to carry out their fundamentalist agenda. Senator Mark Kirk is, by comparison, a useful idiot. He will give Netanyahu what he wants in return for support from the Chicago political machine to get reelected. But he buys that support with a Faustian bargain, using taxpayer money and compromising the security of every American. There was a time when someone like Kirk would be laughed out of the public forum, but currently every fool appears to have his day.

Americans have to make a hard decision on what kind of country they want to have. If they want a state shaped by a holy book and guided by the venal and hypocritical they can have it and it will turn out something like the Muslim equivalents in Iran and Saudi Arabia. Thought and moral guidance police on every corner with mandatory prayer services. Or we can opt to throw all this nonsense into the garbage where it belongs. Make Ralph Reed and his cheering Israel firsters go away or emigrate to Israel if that is their wont. We can make do without them.

This article was first published in antiwar.com titled: Something Rotten This Way Come