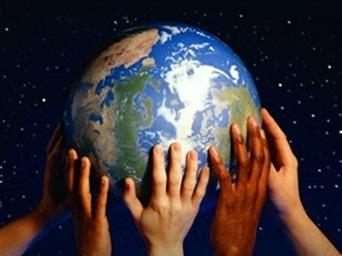 Live in fragments no longer. Only connect! –E.M. Forster

It’s a smaller world with people further apart than ever.

We travel to different cultures; we fight other cultures. We want to control cultures we don’t understand.

Different cultures think differently. If you believe that doesn’t matter, try crossing a road in England or Australia if you come from America or the Middle East.

You’ll be looking left when you should be looking right as you begin to cross. If you automatically look in the wrong direction, you’ll be lucky not to get run over.

If you speak English, you may look at and refer to a red house. If you speak Arabic, you’ll refer to the same house as al beit hamar (the house red).

The linguistic differences reveal different perceptions: the English speaker perceives the colour first and then the house. The Arabic speaker sees the house first and then its colour.

An excellent example of the challenges of different cultures can be found in E M Forster’s famous novel A Passage to India.

We seek to impose our values and beliefs on others; and we fear the potential for others to impose their beliefs on us.

The youth look west and they want to wrest control from their elders. In these situations two cultures function within a larger culture.

It’s a worldwide phenomenon. In Alvin Toffler’s book Future Shock, the author looks at a world with “too much change in too short a period of time”.

The majority of social problems were symptoms of future shock according to Toffler. From his discussion of the components we also suffer from “information overload.”

Marshall McLuhan, author of The Global Village, devoted most of his career to the task of understanding the effects of technology related to popular culture, and how this in turn affected human beings and their relations with one another in communities.

Media and global village are both terms that McLuhan coined. He did this in the 1960s when television was still in its infancy, and the personal computer was almost twenty years into the future.

If McLuhan was right in saying that “the medium is the message”, we are entering a period of immense culture shock.

Generations over 40 will find communicating with those under 25 almost impossible. Between 25 and 40 will depend on how much that age range have kept up with developments and have changed themselves.

Almost no one under 25 is reading the kinds of material that was the bulwark of their fathers. The young generation whose reading is influenced by the new age of twitter and Facebook haven’t the time for the books their parents enjoyed.

They won’t read long articles that the elder generations read. They will avoid reading anything they can find in shorter versions.

Just as the car extends our feet, its invention amputates muscles and clean air. The extension of social media amputates the ability to read and absorb much information.

With the radio and television we have simultaneous access to events on the entire planet. However, television culture diminishes, or amputates, many of the close ties of family life based on oral communication.