Home Life We Have Lost Our Dominant Paradigm! 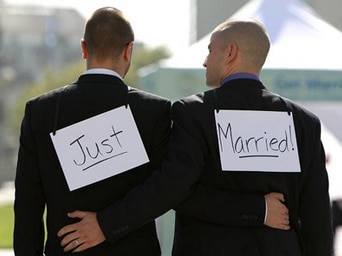 While letting the Internet drive me the other day, I ran across two very interesting and informative websites, apparently oriented to white race issues without nasty racism. They may be linked at the bottom of this column.
The following was posted as a response to the lead feature It was posted by one Michael Hardesty:

“Once about eight years ago a Jewish Communist bookstore dealer in San Francisco told me that he only endorsed homosexuality because it went against the normal grain of things. Apparently he wanted to be against whatever he perceived as the dominant paradigm on principle.“ With people like that there is no possible reasoning.

“I have noticed over the last 38 years a huge proportion of homos in SF and the East Bay are Jewish. They are as intolerant on that as they are on everything else. They are intellectual nihilists and the only good thing to say about them is that generally they are nowhere near as dangerous on the street as blacks.”
This leads us into one of the modern taboo topics, the disgusting power of perverts. Yes, I said “perverts” because the things these men do with one another is surely a perversion of the human body’s natural design and functions. To me, that has always been undeniable fact, and part of the dominant paradigm of society.
How did defying glands and metabolic signaling become “normal”in the ways of society? Especially a society mainly of Christians, who know that “men with men is “unseemly” and an abomination to God?
Since I have dared to delve into this topic, I might as well comment on racial stereotypes familiar to everybody. As a former sports editor, I realize that athletically talented black football players are not generally known for philosophical thinking. However, in recent months two items were in the news worthy of comment.

A star runner for the Pittsburgh Steelers, who displays his Christian faith prominently, spoke out, truthfully about the twisted establishment views on the 9-11 WTC explosions. He was chastised for maintaining the same rational and logical skepticism as most “ thinking ” Americans

Only a week or so ago, another black Christian athlete spoke out openly and courageously against the “same sex” marriage issue. Horror of horrors! How politically incorrect, but factually accurate can one be?

David Tyree, a New York superbowl hero acted as a spokesman for normalcy in a video produced for the National Organization for Marriage, Tyree warned of “anarchy” in the United States if homosexuals are allowed to legally marry. While the New York State Assembly was approving a same-sex marriage bill, the 31-year-old former Pro Bowler insisted same-sex couples couldn’t properly raise a child, and added he’s “disappointed” more people haven’t spoken up against it.

“If they pass this gay marriage bill, what I know will happen is this will be the beginning of our country sliding toward … it’s a strong word, but, anarchy,” Tyree said. “That will be the moment itself where our country loses its grip with what’s right. Marriage is one of those things that are the backbone of society. So if you redefine it, it changes the way we educate our children, it changes the perception of what is good, what is right, what is just.”

“How can marriage be marriage for thousands of years and now all of a sudden because a minority – an influential minority – has a push or an agenda and totally reshapes something that was not founded in our country?” Tyree said. “It’s something that’s holy and sacred and I think there’s nothing more honorable than fighting for it.”

Tyree also doesn’t believe that same-sex couples should raise a child, insinuating they lack the parenting skills to raise children of the opposite sex.

“This is what I do know,” he said. “You can’t teach something that you don’t have. So two men will never be able to show a woman how to be a woman. That’s just, for lack of better terms, common sense.”

Yes, young man, it is uncommon good sense that you speak, few have the courage or the faith to speak out against this potent, Talmudic minority agenda that is bent on destroying what all Talmudists hate most—Christianity.

Jesus gets no respect these days. More hypocrites carry his banner than do righteous individuals. The information at these sites is informative and moderately expressed: