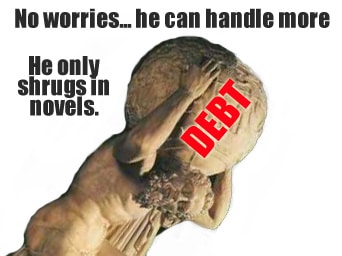 This is the second in a series of four articles

Those old enough to remember the promise of a post-Cold War peace dividend also recall how we segued seamlessly from a global Cold War to a global War on Terrorism.

The fiscal cost for the US component of the Cold War topped $20 trillion in 2011 dollars. But for the Cold War, what might America have accomplished with those resources?

Though the cost of the War of Terrorism is still being tallied, the “but for” costs are fast becoming apparent. The long-term costs of US military involvement in Iraq, Afghanistan and Pakistan could be as high as $4.4 trillion. To date, every dollar has been borrowed. Interest payments alone could total an additional $1 trillion.

During the Vietnam War, President Lyndon Johnson borrowed broadly to afford both “guns and butter.” The butter included Great Society old-age security and health care programs whose deferred obligations were left to the future. That future is now.

Vietnam was the first war that the US clearly lost. Afghanistan is next. As Veterans of the Vietnam War asked in the 60s: Who wants to be the last to die for a lost war?

Secretary of State Colin Powell cautioned before the US was induced with manipulated intelligence to invade Iraq: “You break it, you own it.” Those who fixed that intelligence have thus far escaped indictment.

Against a multi-decade backdrop of debt-financed lost causes, consider the role of fiscal conservatives elected in 1980 when the total federal debt hovered around $900 billion.

Two key financial forces trace their ascendancy from that era. First was the use of public debt to boost the cash flow of private business. To afford this sudden switchover from demand- to supply-side economics, lawmakers agreed in 1981 to reduce tax receipts by $872 billion over five years. The shortfall would be borrowed, largely abroad.

Though that deficit-financed stimulus was later pared back, by the close of the fiscally conservative Reagan-Bush I era, US debt topped $4200 billion. America’s appetite for borrowed funds whetted the appetite of capital markets for more securitized debt.

Second was the dramatic increase in funds under management – particularly pension plans. During the booming 1960s, US companies began putting aside funds for retirees. During the 70s, federal law regulated and encouraged that practice.

Only now we’re three decades further down a fiscal path that burdened the US economy with debilitating debt. With our financial health impaired and our military waging multiple wars abroad, America’s vulnerabilities are there for all to exploit.

China’s rise to prominence was foreseeable by those long experienced in finance and global trade. We’ve seen before how a financial force-multiplier profits those who arbitrage labor costs across borders. During the Cold War, Western “capitalists” shipped fabric into the “communist bloc” for refashioning into clothes for high-end retailers in the West.

National security analysts call that “pitting two sides against the middle while profiting off the misery of both.” With the US issuing the highest-rated debt and China offering the lowest-priced labor, surely today’s financial dynamics were foreseeable decades ago.

While the world’s strongest economy was induced with false intelligence to wage serial wars and incur massive debt, the nation with the world’s cheapest labor emerged to attract America’s purchasing power and reinvest in its own ascendancy.

With the US crippled fiscally, mired militarily and discredited diplomatically, who gained the advantage?

Normalization with China in the 1970s, followed by the collapse of the Soviet Union in the 1980s, opened access to global labor pools. By then, ownership of US corporations was shifting into the hands of fund managers who became obliged by law to pursue only those values calculable in money. By consensus, other values were displaced.

Aided by a steady supply of deficit-financed cash flow, that shared mindset pushed US production offshore. With labor a dominant cost of production, investment capital flowed to firms that moved their manufacturing abroad, often to China.

Like tectonic plates shifting underneath their feet, Americans watched their jobs vanish funded, in part, by America’s “full faith and credit.” Seduced by a consensus mindset, we felt secure embracing the very financial forces that now threaten our economic security, our retirement security and our national security.

To propose that today’s outcomes were unforeseeable suggests an inconceivable incompetence. To posit these outcomes as purposeful suggests the presence of a deeply imbedded enemy within.