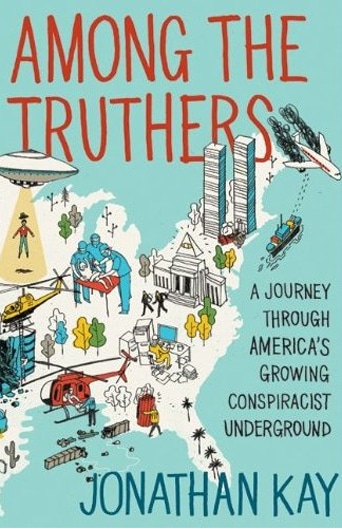 Among the Truthers: A Journey Through America’s Growing Conspiracist Underground, by Jonathan Kay.

“Those such as Kay who seek to delegitimize the 9/11 Truth Movement infer that one should accept official explanations however ludicrous, and that to go off as individuals searching for veracity indicates defective cognition. But conspiracy theories, like scientific theories, gain strength as attempts to disprove them fail. The effort to stop the 9/11Truth Movement has been a bust. The Movement continues to attract well-informed critical thinkers, and Kay’s book does nothing to slow the momentum. And while all of this is good, there is also threat implied, because those who attack the 9/11 Truth Movement appear to link to politically powerful elements known to be ruthless.”

This book should be understood as part of a larger effort that encompasses Phil Mole’s 2006 “9/11 Conspiracy Theories” published in Michael Shermer’s Skeptic Magazine; David Aaronovitch’s 2010 book “Voodoo Histories”; and the 2008 essay by Harvard lawyers Cass Sunstein and Adrian Vermeule, “Conspiracy Theories”, in which, menacingly, Sunstein and Vermeule advocate for “cognitive infiltration” of citizen groups by governmental agents. What unites all of these, despite any pretense of objective academic interest in conspiracism per se, appears to be an underlying dread of a specific species that continues to grow globally and within all segments of society: 9/11.

Kay, a Canadian, is editor of the conservative National Post newspaper and a regular contributor to Murdoch’s New York Post and to Commentary Magazine, a neoconservative standard. He coauthored a 2008 book, “The Volunteer”, an account of a Canadian working for Mossad, the Israeli Intelligence Service. He is a fellow at the Foundation for the Defense of Democracies, a think tank whose leadership includes Newt Gingrich, Steve Forbes, Eric Cantor, William Kristol, Joe Lieberman, Charles Krauthammer, Gary Bauer and former directors of both the CIA and the FBI. “FDD” is a melding of hard right conservatism, the security state and family values fundamentalism, with Richard Perle adding an interesting Pentagon connection.

While Kay mentions various conspiracies, his book focuses sharply on The 9/11 Truth Movement and Israel as he strives to link the Truth Movement with anti-Semitism. His referential conspiracy/myth is “The Protocols of the Elders of Zion” to which he alludes throughout the text along with the claim that the 9/11 Truth Movement took its strategy from “anti-Semites working for the Russian czar.” Kay states flatly “All conspiracy theories — all of them — attract anti-Semites”, and he tries to connect any criticism of Israel with the psychology of the Nazi era. As it happens, though, his book comes as ever more observers are, in fact, seeing connections between 9/11 and Israel’s Mossad, including former Italian President Francesco Cossiga, who stated flatly in 2007 that Western intelligence services know “the attack has been planned and realized from the CIA American and Mossad” (“attentato e stato pianificato e realizzato dalla Cia americana e dal Mossad”).

Kay refers to 9/11 Truthers as “the Enlightenment’s enemies”, and to their beliefs variously as “mythology”, “otherworldly premise”, “nonsense”, “a rejection of the basic tools of logic”, “paranoid fairy tales” and the like. At the same time, there is scrupulous avoidance not only of fact-based arguments presented by the Truth Movement but also of any mention of the growing company of highly credentialed, fine minds all over the world in academe, government, intelligence, the military and every profession one can think of, who have become involved in 9/11 inquiry.

Although his education is in metallurgy and law, Kay’s book reads like a psychological/sociological study even as he decries Truthers for not being “accredited structural engineers” (although, of course, many are). He writes that conspiracist’s possess particular “psychic appetites” and fall into a “basic template”. With such exclusive focus on personality typology, to the exclusion of physical facts, he seeks to lump all conspiracies into the same pool of invalidity. Kay therefore does not serve his argument well with mention of such as Operation Gladio and Israel’s attack on the USS Liberty as if they were mere myths. Regarding the latter in particular, he would do well to read the Findings of the Independent Commission of Inquiry into that Israeli attack, signed by a US Ambassador, a general and two admirals.

Conspiracy theorists, Kay writes, need to “create larger and larger metaconspiracies that sweep together seemingly unconnected power centers.” Their conspiracism, he claims, is “a symptom of a mind in flight from reality”, such flight induced by causes that include “radical nationalism, tribalistic hatred, midlife ennui, narcissism, profound psychic trauma, spiritual longing, or even experimental drug use.” Never is there acknowledgment that obvious conflicts between official accounts and observable facts might provide grounds for disbelief. Regarding his suggestion that drugs play a part in conspiracist psychology, he quotes an “ex-Truther” as having smoked a lot of pot with “those guys”, then reports the person left the Truth Movement after “going clean”.

Among those inclined toward conspiracism Kay includes antiwar and antinuclear activists, English professors, cultural-studies specialists, modern language “types”, experts in “globalization studies” and poets “perhaps because their day jobs already require them to weave a self-invented reality…”. His broad categories of the vulnerable include midlife crisis cases, angry “cranks”, “evangelical doomsayers” “failed historians”, “damaged survivors”, “cosmic warriors” (aka “the hippy of conspiracist typology [who will] often follow eccentric food regimens, dabble in Eastern religious doctrines and exhibit a pronounced suspicion of conventional medicine”) and “the clinical conspiracist — out-and-out insane”. Most are male, he declares, because “the male mind tends to become more easily obsessed with abstract logic puzzles and eccentric ideological systems that are disconnected from the reality of day-to-day human existence.”

In a chapter titled “The Church of Conspiracism” Kay writes that conspiracism plays a “common psychological role as a form of ersatz religiosity” [italics in the original], and that “When we can’t control something directly, we invent gods and witches who can.” The instinct toward conspiracism, he reports, has been intensified by the Internet where there are “professional-seeming ‘journals’ that lend a scholarly prestige to their fantasies, such as the ‘peer-reviewed’ Journal of 9/11 Studies” [italics in the original]. Kay’s derogatory “professional-seeming” is ironic in that his book is without footnotes or a reference section even as he poses as a professional psychologist. He is angered that 9/11 has become a topic of serious discussion at university level and comments derisively about “faculty-lounge guerillas” and “the usual left-wing digressions into state terrorism and Western imperialism”. A particularly sinister proposal by Kay, one reminiscent of Sunstein’s “cognitive infiltration”, is for an educational project with an “anticonspiracist curriculum”.

A problem facing the 9/11 Truth Movement, beyond governmental/media hostility toward its existence, is that such critics as Kay have so long been able to avoid face-to-face debate situations with leading scholars in the Truth Movement, of which there are plenty. Kay’s contorted excuse for avoiding such debate is therefore ridiculous. He claims his attempts to debate Truthers using “all of my accumulated knowledge” have been useless, because they “focus the discussion on the handful of obscure, allegedly incriminating oddities [and] my debating opponent always has more on hand”. This, he maintains, is why “experts” avoid debating conspiracists, and he illustrates this by citing disastrous TV exchanges with Holocaust deniers. Such seamless transitioning from 9/11 Truth to conspiracy theory to thoroughly unrelated Holocaust denial is an appropriate metaphor for the entire book.

Those such as Kay who seek to delegitimize the 9/11 Truth Movement infer that one should accept official explanations however ludicrous, and that to go off as individuals searching for veracity indicates defective cognition. But conspiracy theories, like scientific theories, gain strength as attempts to disprove them fail. The effort to stop the 9/11Truth Movement has been a bust. The Movement continues to attract well-informed critical thinkers, and Kay’s book does nothing to slow the momentum. And while all of this is good, there is also threat implied, because those who attack the 9/11 Truth Movement appear to link to politically powerful elements known to be ruthless.