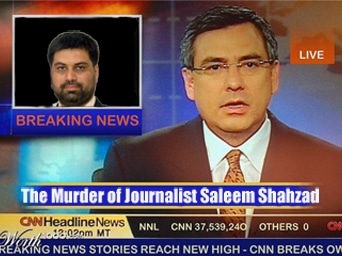 Our media has created super hype over incidents of US helicopters assault in Abbottabad, Mehran naval base attack, Kharotabad incident in Quetta, killing of Sarfaraz Shah in Karachi at the hands of soldier of Sindh Rangers, and murder of journalist Saleem Shehzad. The wrath of media is focused on armed forces, particularly Army and ISI and it looks as if it has old scores to settle and is giving vent to its pent up resentment. It is not leaving any stone unturned to tarnish the high reputation and image of Army and ISI and its rancorous posturing is in harmony with biased foreign media which has a specific agenda.

In case of US SEALs raid on OBL’s compound, instead of putting USA to shame for stabbing a close ally in the back, our media pointed all its guns on DGISI and wanted his resignation. Again when Mehran incident occurred, which was not possible without in-house and external support, our media blasted the naval chief and intelligence agencies. Murder of Shehzad was pinned on ISI to give strength to unsubstantiated allegation made by Adil Hasan, a researcher in Human Rights Asia Watch and notorious Asma Jahangir, a known Army basher. Kharotabad incident in which the FC soldiers killed five Chechens on the pointing of police was sensationalized by media simply because an Army officer was part of the shooting team. Karachi incident was also dramatized since Rangers were seen as part of Army not realizing that both FC and Rangers fall under the authority of Interior Minister and Army has no role in its employment.

Having a close look at the clip flashed hundreds of times on all TV channels to trigger sympathy wave for the deceased Sarfaraz, one wonders why didn’t he beseech the policemen who had caught him red handed with a pistol in his hand mugging a passerby, pulling his hair and beating him? What for was he pleading the Rangers on duty to whom he was handed over by police? Why was Sarfaraz not stepping backwards and not cowering in sheer fright rather than continuously moving forward towards the soldier pointing a loaded weapon towards him despite being repeatedly warned to stay back? He came so menacingly close to the gunman that he dipped the barrel of the gun downwards. What if was wearing a suicide jacket under his shirt and had pressed the button or had snatched the rifle and started firing indiscriminately resulting in death and injury of scores of people. Why didn’t the media highlight the criminal background of Sarfaraz who was a member of eight involved in hundreds of crimes?

Isn’t it true that the terrorized people of Karachi are fed up of terrorists, target killers, extortionists, kidnappers, car and purse snatchers, robbers, dacoits and thugs who have made their lives and property insecure? Have we any idea how many innocent people have fallen victim to the politically motivated target killers at the behest of higher ups of political parties, drug barons and land mafia in Karachi in the last three years? In first six months of 2011, 490 were killed and bloodbath is continuing; 23 people were gunned down on 5-6 July. Who doesn’t know that the politicized police have completely failed to control unbridled criminal activities in the port city and law courts have been unable to convict any terrorist or to award exemplary punishment to criminals and their patrons? Do we know that Blackwater and CIA are very active in Karachi and have a hand in making the city turbulent?

Isn’t it true that the Rangers help has been sought repeatedly by Sindh government since the police was helpless to restore order in Karachi? Has the Home Minister not been issuing orders to shoot to kill on sight on several occasions when the situation went out of control? Did the inquisitive media enquire as to what sort of instructions had been issued to Rangers employed in aid to civil power and that were the Rangers operating under normal conditions or warlike situation? Have we forgotten that on express orders of the then Sindh government, the Rangers stood aside and watched the massacre of people on 12 May 2007 and 9 April 2008 and how Rangers was criticized for its inaction?

Thousands of people have been brutally killed in Karachi in the last three years. Has the media cameras ever captured one scene of target killing and unmasked the killers riding motorcycles? Has the media found who puts viciously tortured dead bodies in gunny bags and dump them on roadside? This unholy practice is going on since late 1980s but the assassins have never been traced. Even if some were caught, put on trial and sentenced, they were released and asked to continue with their gory practice. Has the wailing of the affected families been flashed again and again on TV screens and a mountain made out of a mole?

With Karachi soaked in blood, where average daily killings is up to 10-15, how come tears were shed so copiously over the killing of Sarfaraz who was a known mugger? Why was sacking of DG Rangers Sindh and IG Sindh on orders of Supreme Court hailed by the media? Wasn’t it appreciable on part of DG Rangers to make an announcement on the TV the same evening of the occurrence that the matter will be dealt with expeditiously and culprit punished? So why so much of hue and cry was made as if sky had fallen? It was media hype which forced Supreme Court to take suo motto action. While I have deepest regards for this institution under chief justice Iftikhar, I personally feel this act was done in undue haste. Suo motto is applicable if the person in authority is directly or indirectly involved in the crime, or is trying to shield the culprit, or is not cooperating and is refusing to hand him over to the investigating authorities.

In this land of the pure, concept of accountability of wrongdoers has become redundant under the present government. The corrupt and criminals are shamelessly protected, re-instated and rewarded. Upright and honest officials on the other hand are punished. So far, hardly any directive of Supreme Court has been implemented. Adhocism, cronyism, favoritism, are at peak and merit butchered. The so-called liberated media has been hijacked by foreign powers and is being misused to build perceptions of their choice and to promote Indian and western culture. A brigade of journalists and TV anchors together with the likes of Asma Jahangir are dancing to the tunes of foreign powers in return for financial rewards.

In the prevalent contaminated environments where morals, high principles and pristine human values are of no consequence and acquisition of material gains by hook or crook is in fashion, armed forces stand out as the sole institution where semblance of order is still in existence. The rank and file is disciplined, organized, competent and devoted to service matters. The three services build rather than plunder. The juniors respect the seniors and the latter take good care of welfare of subordinates because of which team spirit never gets eroded. The Army delivers when all other institutions fail. Each member is ever ready to lay down his life for the cause of the country. 3500 officers and men have embraced martyrdom while fighting the foreign paid terrorists bent upon destroying the country. It was owing to their huge sacrifices, valor and unwavering determination that the militants could not gain an upper edge over the military.

The soldiers are braving hardships of extreme weather and terrain in Siachin and battling with Indian troops on the highest battleground of the world with fortitude since 1984. They are tenaciously defending the line of control in Kashmir and keeping Indian forces at arms length. Several aggressive attempts by Indian troops five times superior in men and material on eastern border have been thwarted by our valiant soldiers. They are fighting war on terror since 2002 without any letup under adverse conditions. Their epic role in 2005 earthquake and floods in 2009 and resettlement of 2.4 million displaced persons of Swat region cannot be forgotten. Discomforts, hazards and disruption of family life have made no dent on their morale.

There has not been a single case of mental disorder or suicide case as in the case of ISAF in Afghanistan and US-NATO in Iraq and Indian forces in occupied Kashmir where the rate of mental and suicide cases is alarmingly high. Unlike civil institutions, Armed forces have inbuilt strict accountability system and defaulters are seldom let off.

The ISI acting as the first line of defence is up against a gang of six intelligence agencies operating from a single base in Kabul and has managed to keep their ingresses in check. Terrorists aided by foreign agencies succeeded in hitting military targets in cities mainly because the government allowed CIA and Blackwater to establish their posts inside Pakistan and Interior Minister provided them protection. Our Ambassador in Washington facilitated their entry without security clearance. Raymond Davis was a golden bird in our hand but he was let off on express orders of President. Despite such heavy odds, the ISI undertook its duties efficiently and deserves kudos rather than admonishment.

In the ongoing testing times, our media instead of shielding the Army and ISI against the onslaught of foreign media has joined hands with detractors of Pakistan and singing their tunes. I commend Mubashar Luqman for standing up against the attacking sharks in media stage managed by outside powers and making a sincere effort to highlight the pitfalls of international conspiracy, sift truth from falsehood and project things in right perspective. While the ill-intentioned US desire to purge the Army and ISI should be ignored, we should expose bad eggs in media on the payroll of America and India and sideline them.

About the Writer: Asif HAroon is a defence analyst and a freelance columnist who has authored several books. Email: [email protected]