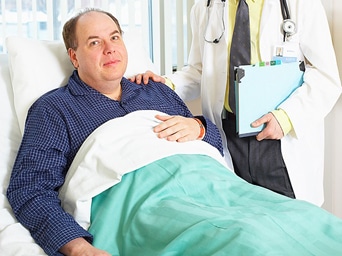 “At VA, we are committed to delivering the best care possible to Veterans,” said Secretary of Veterans Affairs Eric K. Shinseki. “VA’s research program plays an invaluable role by continually evaluating available approaches to determine their benefits and risks in different populations.”

In recent years, there has been a substantial increase in the prevalence of obesity, which is a challenge to treat. Bariatric surgery is the most effective way for severely obese patients to achieve weight loss.

“By evaluating one important treatment option for obesity, this study represents another significant advance in defining best care approaches for those who entrust their health to VA,” said Dr. Robert A. Petzel, VA’s Under Secretary for Health.

The study was designed to shed light on the benefits of bariatric surgery in a defined group of patients over a limited timeframe. Despite this study’s findings, study investigators are not suggesting VA stop doing bariatric surgery for certain patients.

“Significant weight loss results in improved disease control and quality of life for patients, so there are many reasons why patients like those in our study may still want to undergo bariatric surgery,” said Dr. Matthew Maciejewski, the study’s lead investigator and part of the Health Services Research and Development Center for Health Services Research in Durham, N.C. “ Also, other studies, conducted on different patient populations, have found bariatric surgery to be associated with reduced mortality and have also suggested that survival benefits from surgery-induced weight loss may take longer than six years to become evident.”

Dr. Joel Kupersmith, VA’s Chief Research and Development Officer, notes that VA considers all associated evidence in any policy decision, but notes this is just one study. “It is by conducting leading-edge research studies such as this one on bariatric surgery, and evaluating the meaning in the context of all rigorous scientific evidence, that VA Research provides the foundation for optimal Veterans’ health care,” he said.