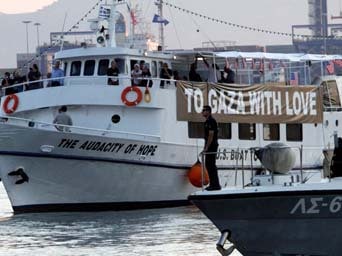 For all intents and purposes, when it comes to the Palestine-Israeli conflict, the United States and Israeli governments have placed themselves above all law.

When it comes to the struggle against Israel’s policies of oppression there are two conflicting levels: that of government and that of civil society. The most recent example of this duality is the half dozen or so small ships held captive in the ports of Greece. The ships, loaded with humanitarian supplies for the one and half million people of the Gaza strip, are instruments of a civil society campaign against the inhumanity of the Israeli state. The forces that hold them back are the instruments of governments corrupted by special interest influence and political bribery.

Most of us are unaware of the potential of organized civil society because we have resigned the public sphere to professional politicians and bureaucrats and retreated into a private sphere of everyday life which we see as separate from politics. This is a serious mistake. Politics shapes our lives whether we pay attention to it or not. By ignoring it we allow the power of the state to respond not so much to the citizenry as to special interests. Our indifference means that the politicians and government bureaucrats live their professional lives within systems largely uninterested in and sometimes incapable of acting in the public good because they are corrupted by lobby power. The ability to render justice is also often a casualty of the way things operate politically. The stymying of the latest flotilla due to the disproportionate influence of Zionist special interests on U.S. and European Middle East foreign policy is a good example of this situation.

There are small but growing elements of society which understand this problem and have moved to remedy it through organizing common citizens to reassert influence in the public sphere. Their efforts constitute civil society movements. Not all of these efforts can be deemed progressive. The “Tea Party” phenomenon in the United States is a radical conservative movement that aims at minimizing government to the point of self-destruction. But other movements of civil society, in their expressions of direct action in the cause of justice, are much healthier. The worldwide movement for the Boycott, Divestment and Sanctioning (BDS) of Israel, of which the flotilla movement is an offshoot, is one of these.

The resulting struggle between the corrupt politics that keeps the West aligned with the oppressive and racist ideology that rules Israel and the civil society movement that seeks to liberate the victims of that ideology goes on worldwide and in many forums. One is the forum of international law. Presently, the debate revolves around the legality of Israel’s blockade of Gaza and the effort of the flotilla movement to defy it. Let us take a look at this aspect of the conflict.

1. The well known American Lawyer Alan Dershowitz, a strong defender of Israel, has blatantly stated, “Israel’s naval blockade of Gaza is legal under international law–anyone who tries to break it can be arrested and prosecuted in a court of law.” Of course, Dershowitz is not an expert on international law. Rather he has made his reputation as a defense lawyer with a passion for murder cases (which makes him quite suited to defend the Israeli state). This being said, what is the basis for his assertion that the Gaza blockade is legal?

2. The argument for the legality of the blockade is based on the 1909 Declaration of London and the 1994 San Remo Manual on Armed Conflict at Sea. Both are part of an international treaty system that sets down the parameters of much international law. According to these documents two states engaged in armed conflict can legally blockade one and other for clear military reasons. However, any blockade would cease to be legal if “damage to the civilian population is, or may be expected to be, excessive in relation to the concrete and direct military advantage anticipated from the blockade.” Defenders of Israeli actions such as Dershowitz do a very superficial reading of the documents and reason that Israel is in an armed conflict with Hamas, which is the ruling authority in Gaza, and so Israel can legally blockade Gaza so as to stop the importation of weapons and “terrorist” fighters.

3. The holes in this reasoning are big enough to sail a flotilla of small ships through (if only they were not imprisoned in Greek ports). Thus, Israel certainly does not consider itself engaged in an armed conflict with another state. If you doubt this just ask any member of the present Israeli government whether he or she would define Palestine, including Gaza, as a state. In truth, the proper definition of Israel’s presence in the West Bank and Gaza is that of an occupying colonial power whose policies and actions are stark violations of the Geneva Conventions. That is, by virtue of their colonizing actions and treatment of residents of the Occupied Territories, their presence in Palestine beyond the 1967 borders is not legal (one can also argue over the legality of Israel within the 1967 borders). That means those they are in armed conflict with are those resisting illegal occupation. There is no international law that makes it legal for Israel, itself acting illegally, to blockade those legally resisting its actions. The arbitrary labeling of those resisting as “terrorists” does not change this legal situation.

4. As noted above, “legal” blockades must have a military objective and must not do excessive harm to the civilian population. Yet there is evidence that Israel’s goals for the blockade are not primarily military but are, instead, aimed at committing excessive harm to the people of Gaza. The Gaza blockade was not done out of fear of weapons smuggling or terrorist infiltration, but rather constituted a conscious act of economic warfare against the people of Gaza for having the audacity to be ruled by Hamas, the winner of a 2006 free and fair election. There is documentary evidence for this interpretation of events. For instance, in 2006 Dov Weisglass, an adviser to then Israeli Prime Minister Ehud Olmert, publically stated that the goal of Israeli policy in Gaza was to “put the Palestinians on a diet, but not make them die of hunger.” Then, in June of 2010 McClatchy Newspapers published Israeli government documents attesting to the fact that Jerusalem primarily saw the blockade as an act of economic warfare, and not as a security measure. To this you can add the fact that Israeli gunboats keep shooting at Gaza fisherman who they know are doing nothing except fishing. What we have here is the collective punishment of 1.5 million Palestinians. As such it is not legal, it is illegal–a violation of the Geneva Conventions. The UN Secretary General, Ban Ki-Moon, usually so responsive to U.S. demands, momentarily broke free and in his 2009 annual report told the Israelis they should end their unwarranted blockade. He was ignored.

Part III – We Cannot Count on Governments or International Law

So how is it that the Israelis can get away with these crimes? It is because, at the level of government, their lobbyists and advocates wield enough influence to successfully warp the policy formulation of Western governments. Against this corruptive influence, international law means very little. Even embarrassing historical analogies mean little. Nima Shirazi, whose blog, Wide Asleep In America can be found at http://www.wideasleepinamerica.com/ wrote a very good piece entitled “The Deplorable Acts: The ‘Quartet Comments on Gaza.” In this piece he points out the relative similarity between the Gaza blockade and the blockade of Boston set up by imperial Britain in late 1773. The Americans of that time labeled the action, “the Intolerable Acts.” Secretary of State Hilary Clinton and her boss in the White House ought to consider this analogy, but then there is that lobby power factor that would prevent them from ever acknowledging it.

As a consequence, those who seek justice for the Palestinians must, for the moment, not place much hope in government or international law. They must act within the realm of civil society, building the BDS movement and its offshoots. Where government moves in and attempts to block civil society actions, these actions must be turned against government if only by using them as campaign tools to expand the BDS movement further. If we persist there will come a time, as was the case with South Africa, when the power of civil society will be such that politicians and bureaucrats will see the cost of defying popular opinion as greater than defying Zionist lobbies.

For all intents and purposes, when it comes to the Palestine-Israeli conflict, the United States and Israeli governments have placed themselves above all law. That means not just international law, but selective domestic law as well. The ubiquitous and improper use of such categories as “terrorist” or “rendering material aid to terrorists” are the corruptive vectors here. The only hope for justice and the integrity of law is in the realm of civil society which might in the future redeem not only Palestine, but the US and Israel too.

Lawrence Davidson is professor of history at West Chester University in West Chester PA. His academic work is focused on the history of American foreign relations with the Middle East. He also teaches courses in the history of science and modern European intellectual history.  He can be reached at: [email protected]