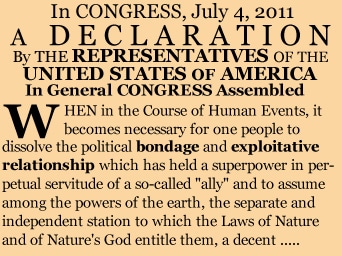 Why should the UNALIENABLE rights  proudly celebrated by Americans on the 4th of July not be extended to humans everywhere?

No matter what Biblical right has been claimed by Israel for six decades of the subjugation of Palestinians and the theft of their land, America violates its own most basic principles by failing to support Palestinian statehood.

I’m writing this on the 4th of July, the American Independence Day.  In America and on US military bases and embassies around the world, it’s a day for celebration of a memorable day in 1776.

Revellers often use the holiday to toast the country’s founding fathers who, like Washington, Jefferson, Madison and Franklin were revolutionary signers of the Declaration of Independence.

Their names and those of Adams, Jay and Hamilton to a lesser degree, have been memorialized in the names of cities, streets and institutions everywhere in America.

Though much of the history of American independence is unknown by many, a few notable remnants from the declaration have become widely known, the most popular being:

“We hold these truths to be self-evident, that all men are created equal, that they are endowed by their Creator with certain unalienable Rights, that among these are Life, Liberty and the pursuit of Happiness.”

The slogan that permeated the air during the revolution, like all chants of revolutionaries, has been equally famous: “No taxation without representation” they repeated.

If, as the Declaration says, “all men are created equal,” why do Americans act as if that fundamental principle applies only to citizens of the USA?

Why should the UNALIENABLE rights — among them life, liberty and the pursuit of happiness, proudly celebrated by Americans on the 4th of July, not be extended to humans everywhere?

As former US intelligence analyst Ray McGovern observes, “The Declaration of Independence was meant to be a statement expressing the ‘self-evident’ rights of all mankind. Those principles had a universality that was a beacon to the world.”

McGovern points out that many Americans think of the “Declaration of Independence as applying to Americans, but not to many others — like the 1.6 million people locked in the narrow confines of Gaza.”

No matter what Biblical right has been claimed by Israel for six decades of the subjugation of Palestinians and the theft of their land, America violates its own most basic principles by failing to support Palestinian statehood.

America has no compunction against infringing on others’ independence. The US occupation of Afghanistan and Iraq has robbed those countries of their independence.

The same thing can be said of the victims of all of Israeli and American occupations. After the celebrations of this Independence Day, Americans should take a sober look at the independence they are depriving others of in the Middle East.

The questionable justification for the occupation of Afghanistan ceased to exist once Osama bin Laden was assassinated by an American Seal unit.

The excuse for continuing occupation of Afghanistan has been “nation building”. America has no legitimate business building any other nation but its own.

The rationale given for the destruction, invasion and occupation of Iraq was a complete fabrication designed only to destroy that country’s independence.

There should be no doubt in anyone’s mind that the criminal supporters of Israel in the American government engineered the travesty in Iraq for one reason only: to prevent Iraq from EVER threatening Israel with WMDs.

To achieve this, America will have to keep troops in Iraq, continuing its prevention of Iraq’s independence. US troops have no legitimate business in Iraq or Afghanistan or Pakistan or anywhere else.

Finally, now that the July 4th celebrations are over, America desperately needs to declare its independence from Israel.