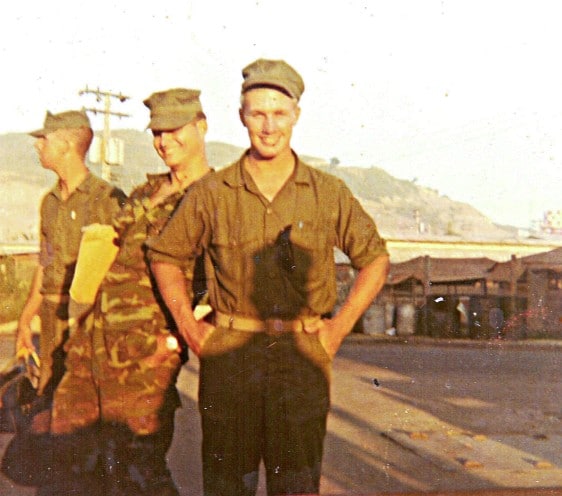 No Matter How Hard We Try To Forget

Forty-two years ago I was in South Vietnam, serving as a Marine infantryman.  What does this mean?  Is 42 years “a sea of time?”  To me, I am still the same.  I am just as stupid, certainly, and am willing to delude myself into believing I could do now, what I could do then.  Maybe I could.

Then I think back.  I remember an amphibious landing back in ’69.  I was on the USS Washtenaw Country (LST 1144) with the 1st Bn., 26th Marines.  My platoon had been billeted somewhere in the bottom of the ship.  I would call it “the basement.”  The Navy guys called it the “Australian troop quarters.”  No idea why.

We had been given new ammunition.  I carried 22 magazines, around 400 rounds, plus two bandoliers, another 400 rounds.  With that I had 3 days food, 4 canteens of water, a smoke grenade, two HE grenades, two “pop flares” and a mortar round.  My WW2 era pack had everything else, what we called “writing gear.”  I had nothing else.  Uniform was camo pants, torn and bleached nearly tan, the “Vietnam boots,” worn rough, sole and leather cracked.  There was a steel plate in the sole, you could see it sticking out.

I had one green T shirt and a small hat I had bought from a vendor at China Beach.  The place from the TV show is imaginary.  How imaginary, we can’t even begin to describe.  “More than you could believe” would be accurate.

There were no dry socks.  We didn’t wear them.  Nobody wore underwear, it would rot off.  Laundry was a combination of rain and walking through water.  Bathing was pretty much the same also.

I remember getting on a scale while heading up toward the deck.  It said “289 pounds.”  Over half that was gear, part of it the life preserver the Navy made us wear.  It must have weighed 20 pounds.  If you dropped it in the water, it would sink like a rock.

This describes Vietnam, describes the Marine Corps pretty well.  90% acting, 90% phony and 10% doing the fighting and dying.  With that came exhaustion, thirst, starvation and some anger.  We could feel how much the Marine Corps hated us, how much America hated us.

No military was ever sent to perform a more corrupt and stupid task than ours at that time, or so I believed then.  History has, of course, proven me wrong.

Through training in California, you could feel it, the hate.  Nobody would look us in the eye, other than the wonderful people at the USO, San Clemente, Los Angeles.  Thanks.  I remember you guys.

Everyone else, looking at us made people feel uncomfortable.  Marines didn’t come back.  Being in a combat unit in Vietnam, one of the 9%, was a death sentence. 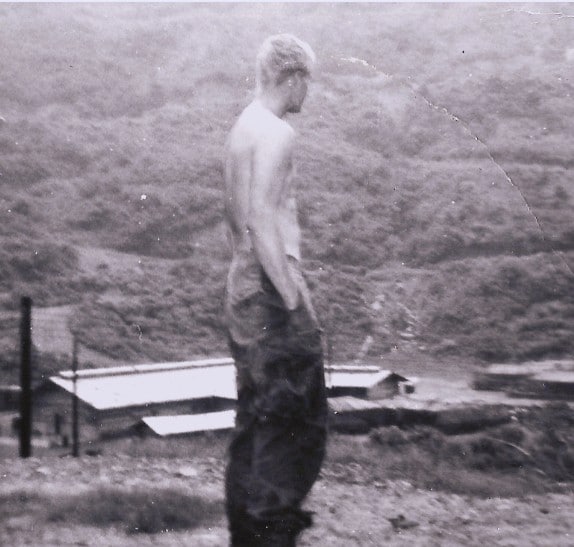 Vietnam was, like the wars of today, one fought by the few.  There were still draftees then but avoiding the draft was easy.  For the privileged, there was the National Guard and the Reserves.  These organizations didn’t go to Vietnam, except with extremely rare exceptions.  It was as hard getting into a National Guard unit as getting into West Point.  I can actually attest to that.

Dad had to know a political boss or have “juice” in Washington.  Today, these folks call themselves “veterans.”  They don’t do it in front of real veterans.  Some of us still bite.  We remember.

Vietnam.  It was a war fought by the poor, the patriotic, by my current definition, interchangeable with “insane,” and the wildly adventurous.

What it wasn’t fought by was the military.  They sat that one out, letting draftees and “disposable” short term enlistees do all the combat duty.  Regular military tended to stay behind, living in a world of barbed wire enclosures, “skivy girls” and the hum of air conditioning.

Those who really fought the war left immediately, ran for the door the second they could get away from the Marine Corps.  They saw reality, a war fought by walking skeletons, a war without decent weapons, never a hot meal, not even Christmas, sleeping on the ground every day and watching friends die off one by one.

The “real Marine Corps” was what you saw if and when you got back to a base.  To us they looked like pigs, fat, pink and overdressed.

There were people who never went out into the field because they had jobs.  Some were worked to death, 12 hours a day. These weren’t “lifers,” professional military, the majority of whom during Vietnam were cowards and shirkers of the most deplorable kind.  They were “us.”  We remembered in training, the day assignments were given out.  Some guy who couldn’t read would be assigned to an “Intelligence School” while those who refused to accept commissions were relegated to “WestPac ground forces infantry replacement 0300.”

By the end of boot camp, we knew what this meant and none of us wanted it.  It was a sentence of death.  In 8 weeks, we learned alot.  We learned about the real military, corruption, incompetence, laziness.  Marine drill instructors were hand picked, “dressed to the 9’s,” and of an ilk we would never see once leaving training.  Our real senior NCO’s with some exceptions, were uniquely unexceptional, rural, uneducated, unmotivated, alcoholic and never ever ever to be seen in combat.

Do I mean the Marine Corps had no exceptional people?  Not hardly!  I was with nothing but exceptional people.  They would be the best people I would ever meet, though I didn’t know it then.  Half wouldn’t survive.  Of those who did, some did exceptionally well, despite catastrophic injuries, certain psychological peculiarities of the combat vet, despite alot of things.

My squad, my platoon would be my family all of my life, a family that lived mostly in memories.  A few of us stay in contact, now speaking rarely, years between even emails.  Some families are like that.  More of it, I think is that those of us who are still around, the numbers are miniscule, are having a bit of trouble holding on.

I look at the wars today, the military.  I see troops better paid, better fed, were this a few years ago, I could talk about the incessant Bush era “thanking” that went on, the endless parades, the flag waving.  Of course, by now, I simply see Vietnam all over again, an army destroyed, veterans filling prisons, living under bridges, losing their families.  “Then” we were divided.  Vietnam was fought by “liberals.”  Combat vets were all Democrats, the guys who lived in the rear, the guys who watched us go off to fight the war, they were Republicans.

There were clear political lines, then, a freer press, a freer America.  We recognized class war when we saw it.  Real war is always class war, poor fighting to make rich people richer.  If you don’t know it when you join up, you know it before your first week of training is over, at least we all did.

It took the current crop of veterans a few years to catch up but they are getting there.  Where “there” is, now, that’s a question.  Vietnam vets came home and fought to end the war.  It wasn’t just a few. Not all were activists but all of us, the combat vets, were “anti-war.”  Every single one of us.

Every combat Marine I met in Vietnam, every single one, was against the war.  All thought it was insane because only a total moron could miss that.  Vietnam was a tragic farce.  Those who speak of it differently, huge numbers of them, either weren’t there and lie about it or went through a process of institutionalization.  I won’t dwell on this much.

Few surviving veterans of Vietnam were real combat vets.  Those who were, I am one, would rather have cooked food, driven a truck, I didn’t resent the others.  I wanted to be them.  When I got back, when we got back, they were still our brothers, we had no reason to think otherwise.

With that came the phonies.  Hundreds of thousands who never served in the military began claiming to be Vietnam combat veterans.  They bought uniforms, medals, made up stories, joined organizations, became spokesmen for real veterans.  Most “Vietnam veterans” I have met since 1970 are phonies.

Others, those who served honorably, doing the jobs they were assigned, found themselves able to informally “reclassify” themselves as combat troops.  Nobody wanted to hear ab0ut truck driving.  So, everyone, not only became a combat vet but also a former POW or Navy Seal or Marine.

I remember real combat.  First times out, paralyzing fear.  After that, you just don’t care anymore.  After that, you are dead inside, a “dead” that never goes away.  Real combat vets call the look that comes with that “the thousand yard stare.”  I can kill someone as easy as looking at them.  We all can but we work to convince people otherwise.  We all became actors.

What we also learned was how to “not kill.”  Killing requires “reasons.”  Anyone who believes “reasons” is nuts.  Anyone really in combat knows who needs killing.  We also know we can’t talk about it.  I won’t talk about it here or ever.  I simply go on pretending to be a “real person” like everyone else except that I know the difference.