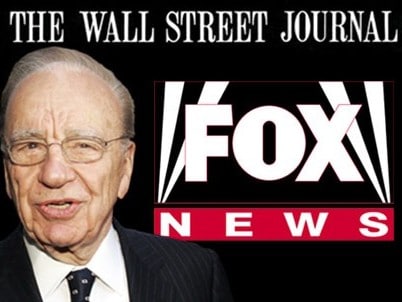 A Word Or Two on What Isn’t Being Said

Today the British papers not owned by Rupert Murdoch “rumored” that he might be jailed.  Americans, even Brits, have little or no idea  what is at risk here.  There is simply no one who can report it when the individual who, not only controls the world’s largest news organization turns out to be, well, what?

Who is Rupert Murdoch?

What he is not is an Australian “right wing” billionaire.  Murdoch, though born in Australia is an Israeli citizen and Jewish.  Why is this important?

Murdoch is now admitted to have controlled the political systems in Britain and America for two decades.  He has had the power to choose national leaders, make policy, pass laws at will.  Where did the power come from?

We now know it came from spying, blackmail, bribery and propaganda.

What is his agenda?  Ah, there’s the rub.

Was it about selling newspapers using scandals or spying in the name of Israel to push Britain and the United States into wars for Israel?  There is a simple answer.

Murdoch’s primary motivation isn’t even that he is “for Israel.”  Murdoch is, perhaps, the most influential Israeli, more powerful than Netanyahu.  The problem with that is that his beliefs are what we call “ultra-nationalist.”

This makes him a threat.  Ultra-nationalists are known to support wars, plan terrorist acts, manipulate populations into strife and racism, foster fear and panic, even financial ruin.

What are we describing here?

Murdoch owns Fox News and so much else you may not have a time to look at the list.  If he doesn’t own it he doesn’t want it.

Fox is a network and Murdoch, owning so many newspapers across America and being a foreigner shouldn’t be able to control such a thing.  How did he do it?

Reagan “appointed” Murdoch an American citizen.  Murdoch promised to have Fox News support Republicans and say whatever was needed, no matter how false, how stupid or, as we  have seen now for decades, how genuinely evil.

What he really did, however, was use Fox as a base to allow Israel to run spy operations.

1.  Israel got lots of military technology and secrets they could sell to America’s enemies for money.  This is good “Murdoch” business sense, as we all see now.

2.  Murdoch helped Israel gain control of congress.  They literally run the United States.  The tools?  As in Britain, bribery and blackmail, police, military and congress.

No surprises for anyone.

Murdoch has, in fact, engineered the last 20 plus years of American history, picking politicians, throwing elections, establishing policies.  Were the decisions his own?

I don’t think so.  I think Murdoch represents a group, mostly financial, making up the Rothschild family, the Federal Reserve Banks and organized crime.

There is an Israeli or Jewish aspect to some of this but not in the sense of being “pro” or “anti” Semitic.  The Murdoch empire, married to the “lily white” “no Jews allowed” Republican Party simply put their own very powerful spin on the good old “New World Order,” pushing it into drug running, arms and human trafficking, manipulated international currencies and debt on a massive scale, ran America and the European Union into economic collapse, worked with oil companies to set up price fixing schemes…

This is what Murdoch and his friends have done, all the while pointing their fingers at Osama bin Laden and the evil “liberals.”

They divided Britain, starting at first as “conservatives” and then changed to “liberals.”  What they did in Britain is undermine legal government, destroy the nation and the public’s trust in the government, Blair, Cameron, it doesn’t matter, Murdoch chose both and ran and runs both like hand puppets as he did with Bush and his friends.

The ideas are simple.  Bilk the countries out of every last cent, use a portion to bribe or blackmail politicians, buy police and get even more money.

Then you lie to the people, give them enemies to hate, arrange wars for them to fight and stand back and watch them destroy themselves.

Are there people really this evil?

Yes there are, Murdoch, the gang at his companies, the gang at Fox News, the folks in the US called “neocons,” the Israeli lobby in the US, the ADL, AIPAC and the Likudist faction in Israel run by Netanyahu.

These folks hate the United States.

A similar group hate Britain.  Australia has their own, he runs that place entirely, right into the ground.  He also runs Germany, Canada, he runs much of what was once the “free world.”

Am I describing Satan?

His strongest advocates, those who have stood with his thieves and liars against all that is decent, all that is good, all that is right is the Evangelical and “Zionist” communities in the United States.  They were and are the “fertile ground” for his message of hate and deceit.

Who does Murdoch claim to hate?

Muslims for sure, they are all bad.  Everything he touches in his hundreds of publications and TV shows or the phony news his gang of cutthroats create, hate of Muslims is always on top.  This pleases his Israeli friends.  If things keep going as they are, he may need to hide out there and Israel will always protect him, maybe plow down a few Palestinian homes to give him a grand estate.  After all, Muslims are an easy target, living in petty dictatorships run by thieves who we have now learned have always run to Washington and Tel Aviv for orders.

Take out a second.  Think the word “Palestinian.”  Do you also think “terrorist?”  Do you see a child being killed by an Israeli helicopter or innocent people killed by a TV villain, almost invariably played by Jewish actors, perhaps a sick “inside joke” of Murdoch’s.

The Islamic people of the world have been played, exploited and crushed since 1919.  History will show it carefully planned and financed by a certain European banking family, one that 6 years earlier had established an illegal banking system in the US.

Learn about the real Balfour Declaration and how it was gotten through blackmail, learn who wrote it and to whom it was sent.

The story reads exactly like the things that are coming out in Britain day after day.

Murdoch tells his followers to hate “smart people.”  There has to be fear of the educated, the “elites.”  You can’t have rampant racism and blind ignorance until you destroy public trust in the natural leaders, until you destroy real culture and replace it with mechanized music, scandal mongering, dirty sex and endless conspiracies.

Murdoch is the real king of conspiracy theories.

Look at the endless list of wild accusations that came from Fox alone.  Then look at the others, the accusations, the wild and insane things that were written into history but likely planned by Murdoch.

There could be no great conspiracy without control of the news.

Now we find the news itself controlled the governments and may well have written the scripts to the wars, the rigged elections, the acts of terror and the misdirection that sent America into a decade of cruel and useless bloodletting after terror groups that never existed in the first place.

Now, today, as our British cousins are reeling in the revelations that their government for decades has not been their own, a diseased hybrid of crazy old man, Israeli spies and the paid stooges that the people thought were serving them….

And it goes on in America, full blast, Murdoch and his creatures, planning the future of America.

One of his creatures is Boehner.

Then there is Gingrich.

There was the entire Bush administration.

But, to get to the dark heart of evil, first you look at Fox News.