Home World Palestine is a reality 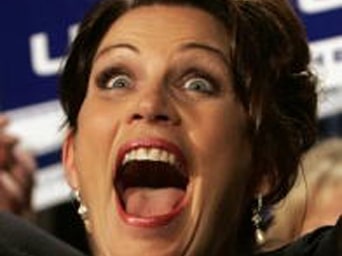 How long will Israel get away with its sordidness is an issue that the US should consider seriously, if it is serious about peace-making in the region.

Poor Michele Bachmann! The US Republican representative and presidential hopeful has been the target of merciless criticism and ridicule for her slip-up in explaining her sponsorship of a controversial pro-Israel Congressional resolution.

The slip-up, a seemingly ‘pro-Palestinian tweet’, was caught by Salon.com, the popular news website, when Bachmann wrote explaining her adoption of the House measure, saying, “I’m proud to co-sponsor HRes 268, coming to the floor [last Thursday] night,’ stressing, “The resolution supports peace negotiations between Israel and Palestine [italics added].”

Salon.com commented: “In doing so, she unknowingly strayed from pro-Israel standard parlance in using the term ‘Palestine’ as opposed to the more standard ‘Palestinians’ she inadvertently implied the existence of Palestine as a place — something Israeli hawks are loath to do.”

The pro-Israel resolution, (which you can read here) now adopted by the House of Representatives and the Senate, denounces three things: a potential unilateral declaration of statehood by the Palestine Liberation Organization; the upcoming effort to seek recognition at the United Nations, and the involvement of Hamas in the Palestinian unity government.

Importantly, it also urged President Barack Obama’s administration to suspend financial assistance to the Palestinian National Authority if its leaders push for a United Nations vote for unilateral recognition in September.

Disregarding the fact that the Gaza Strip is not an Israeli region, Secretary of State Hillary Clinton had earlier astonishingly criticized activists’ projected challenge of Israel’s sea blockade of the Palestinian region on the eastern Mediterranean, maintaining that their efforts are neither “necessary or useful” in helping Palestinians there.

The significance of the slip-up by the Congresswoman, who is now in a ‘virtual tie’ with the Republican presidential front-runner, former governor Mitt Romney, is that it should encourage Palestinians and their supporters to repeatedly utter the word ‘Palestine’ in their public exchanges so that it would become common knowledge to all listeners as had happened with Bachmann. Half of their battle is obviously in gaining international attention and publicity, steps that the Arab side has neglected for decades.

Consider another example. Israel has mistakenly claimed that it has been victorious in nixing the passage of the second flotilla set to sail from Athens to Gaza earlier this month in a bid to disrupt the illegal Israel sea blockade there. Last year, the first such flotilla, sponsored by Turkish sympathizers, suffered the loss of nine protesters, including a Turkish-American, when the Israelis descended on the unarmed boat in international waters in the eastern Mediterranean.

A key factor in disrupting the second flotilla this time was reportedly the intense Israeli lobbying with the money-hungry and bankrupt Greek government which temporarily jailed the American captain of one of the ships, named appropriately, The Audacity of Hope, and prevented all others from leaving Athens.

Likewise, the so-called ‘flightilla’ saw hundreds of pro-Palestinian Europeans and Americans land at Tel Aviv airport but they too were denied continuing to the West Bank to attend a Palestinian week of ‘fellowship and actions’ in Bethlehem, still surrounded by many illegal Israeli colonies thanks to the protection of the Israeli army.

Palestinians in the West Bank and the Gaza Strip have not been allowed to construct any airports; all travel there has to be by land through Jordan or Israel. Even Gaza’s seaport has been shutdown to international shipping.

According to Haaretz, the Israeli daily, among the Palestinian organizers of these programmes were well-known advocates of non-violent protests such as Sami Awad of the Bethlehem-based Holy Land Trust, and Mazin Qumsiyeh, a science professor at Bethlehem University.

The unprecedented international publicity, thanks to the presence of tens of foreign journalists in Greece and Israel, highlighted Israel’s despicable and disruptive attempts which in the end run served to tarnish Israel’s image and underline the scheduled peaceful Palestinian intentions.

Another sordid image of Israel has been simultaneously exposed this week on the BBC. It focused on an Israeli government plan to make conditions “tougher” for Palestinians in its jails.

According to the BBC, the latest figures “suggest there are 5,335 Palestinians in Israeli prisons for security or public order reasons, including 211 children.” Among them are an undisclosed number of political detainees.

Since the failure of Israel to reach an agreement on its terms with Hamas, which runs the Gaza strip, for the release of Israeli prisoner, Gilad Shalit, Israeli Prime Minister Benjamin Netanyahu has decided to change the conditions of the Palestinian prisoners. “The celebration is over,” he insisted, reported the BBC, without providing any details.

The curator of the Abu Jihad Museum for the Prisoners’ Movement told the BBC that “prison is a crucial part of the Palestinian struggle”. Fahd Abu Al Haj, the curator who had spent 10 years in an Israeli jail, pointed out that the museum contains the suffering of more than 800,000 prisoners, dating back from the beginning of the British mandate period to present-day Israel.

How long will Israel get away with its sordidness is an issue that the US should consider seriously, if it is serious about peace-making in the region.

ABOUT THE AUTHOR: George S. Hishmeh is a Washington-based columnist. He can be contacted at [email protected].