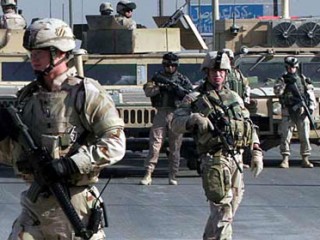 “Although the Iraq invasion was launched under false pretenses, U.S. troops stationed there are “defending our country.” Defending it from who?”

The time for U.S. withdrawal from Iraq is coming closer. In 2008 the United States and Iraq agreed to a Status of Forces Agreement that set a deadline of the end of 2011 for all American troops to leave the country. However, just like someone who starts to beg off a promise when the time for action approaches, U.S. officials are now expressing second thoughts.

Back on May 24th outgoing Defense Secretary Robert Gates said he “favored extending the American presence, noting that the Iraqi military will need help with logistics, intelligence and defending its airspace and that a continued U.S. military presence will send a ‘powerful signal that we’re not leaving, that we will continue to play a part.’” We will continue to pursue “our role in the region.” Considering that we have known for some time that the Iraq war was waged for largely contrived reasons and constituted a violation of international law (the waging of illicit and unnecessary war), it is difficult to know just how Gates defines “our role.” To date in Iraq, that role has equaled the removal of one dictator (who we once supported) at the price of killing over one and a half million Iraqis (and approximately 4500 Americans), the maiming of an even greater number, the destruction of the nation’s infrastructure, and the creation of conditions for multiple civil wars. Washington has also opened the way for Iran’s influence in Iraq to eventually become predominant. In accomplishing all of this the Americans have nearly bankrupted their country. Given such achievements, one would think the reasonable thing would be to cut one’s losses and get the heck out.

But no, Gates’s attitude has carried over to that of the present Defense Secretary Leon Panetta. Panetta recently made his first journey to Iraq to “hold close door meetings with Iraqi officials…to press them for a decision on whether they will allow U.S. troops to remain in the country….” And, by the way, Washington has increased the price for continued assistance. The U.S. wants the Iraqi government to shut down those subgroups that are closest to Iran. Thus, as Admiral Mike Mullen, chairman of the Joint Chiefs of Staff, put it “Iran is directly supporting extremist Shi’ite groups that are killing U.S. troops and any agreement to keep American forces there beyond the end of the year would have to address this problem.” Of course, such a demand, if actually met by the Iraqi administration, would mean the collapse of their government because those “extremist Shi’ite groups” are part of the present parliamentary coalition. It could also hasten the outbreak of civil war.

Has anyone in the U.S. government thought this through? Well, certainly not Defense Secretary Panetta. He seems to be too taken up with righteous indignation. “In June we lost a hell of a lot of Americans [in Iraq] as a result of those attacks [allegedly by ‘Shi’ite groups].” Panetta said that the anti-American Shi’ites were being supplied with ever more powerful weapons by Iran. He continued, “we cannot just simply stand back and allow this to continue to happen….because, very frankly, they [Iran and the Iraqis they support] need to know that our first responsibility is to protect those that are defending our country. And that is something we are going to do.” One hears the words and their meaning appears straightforward. Well, that is if you are the average man or women from Peoria or Spokane. But maybe someone in Washington (or even Peoria and Spokane) ought to ask what Panetta’s words seem to say in Basra or even Baghdad. Here is one interpretation:

1. The United States invades Iraq, massacres its population and destroys its infrastructure, but those who insist America withdraw its troops and physically resist their presence are “extremists.”

2. The U.S. can pour billions of dollars worth of weapons into Iraq and the rest of the Middle East, putting them into the hands of select groups who will ally with Washington, but Iran, operating on a much smaller scale, cannot do this without being labeled as a supporter of terrorism and extremism.

3. Although the Iraq invasion was launched under false pretenses, U.S. troops stationed there are “defending our country.” Defending it from who? From those Shi’ite extremists? They do not threaten the USA, the USA threatens them and that is why they are being belligerent! From Iran? American troops virtually surround Iran while Washington calls for the overthrow of its government. Come now Mr. Panetta, just who is threatening who?

Part II – The Rational Thing To Do And Why

A rational analysis of the American position in Iraq would demand adherence to the Status of Forces Agreement and the withdrawal of all American troops from the country at the end of 2011. To do so would:

– Put an end to what was and is, after all, an immoral war and a disastrous occupation.

– .Prevent the U.S. from possibly being dragged into a new Iraqi civil war. Given what we have done to that country, another round of civil war is quite probable. The Sunni gunmen are still out there, they too are anti-American, and some of them are really extremist (though they are not al-Qaeda operatives and certainly have nothing to do with Iran). So, if we are “in country” when Iraq goes through the next phase of violent upheaval, American troops will be attacked by both Sunni and Shi’ite militias.
– Avoid a possible direct confrontation with Iran. Panetta threatened to “go after” those endangering American troops “unilaterally.” We have seen where the logic of such statements have taken the U.S. in the past. Will Washington end up attacking “sanctuaries,” or “supply trails,” or “training bases” in Iran? That is a formula for “mission creep.”

From the first moment of the American invasion of Iraq, the men and women in Washington did not know what they were doing. When confronted with reality they retreated into fantasy. The result was that their perceptions of what was real in Iraq were so off the mark, so far from what was actually the case, that the subsequent occupation was a gigantic deadly mess. That was the doing of the Bush White House–A bunch of neo-con ideologues and right-wing religious zealots. You would think that the Obama White house could do better. And maybe they will. Perhaps all this talk by Panetta and Mullen is just posturing to serve as a cover for the ultimate retreat. Perhaps the Iraqis will tell us to get out and thus save us from ourselves.

However, some things have not changed from the time of the Bushites to that of the present administration. For instance,

1. The need to avoid finger pointing by the opposition party (in this case the Republicans) is a constant political requirement. Come the 2012 election, President Obama does not want the Republicans telling the American electorate that the Democrats “lost” Iraq, and all those dead soldiers died in vain.

2. The lobbies that pushed for the invasion of Iraq back in 2003 are still their behind the scenes in today’s Washington. Some of the most important ones wanted to get rid of Saddam Hussein for the sake of Israel (not for the sake of the Iraqis) and an outcome that turns Iraq over to Iranian influence would be a disaster for them. Therefore, they must be pushing for a continued American presence in that country. Keeping the U.S. in and Iran out of Iraq is probably “our role” as far as those lobbies are concerned.

3. All the politicians in Congress and the White House still breathe the hallucinogenic air of American exceptionalism. In that atmosphere there can be tactical mistakes, but never strategic ones. And defeat is seen as unnatural, somehow against the will of divine providence. Viet Nam must never occur again.

The reader should note that all of these constants reference domestic politics and image. That is, perhaps, a key to the American problem. Foreign policy decisions, especially in the Middle East, most often reference domestic political forces and their desires and needs. They do not necessarily reference the reality of the foreign situation in question. It is like walking a cliff line with your thoughts a thousand miles away. So, the American desire to stay in Iraq is a function of politics configured in Washington and not Baghdad. If the Iraqis concur, the disaster will just be prolonged.

Read more by this author here.

Gifts from the kitchen; From Godiva candies to canine curiosities, homemade gifts ideas abound on the Web.(TASTE)

– If jams or jellies are what you plan to give, here’s a simple page with some good links and a basic overview. You can join in a canning discussion, check a chart of canning times for fruits and vegetables and get tips from Home Canning Magazine. see here homemade dog treats

– Everyone who likes to cook should become acquainted with SOAR – Searchable Online Archive of Recipes. You have a good chance of finding any recipe you can think of at this site. SOAR has a special category just for recipes and gift ideas. A few favorites: chocolate-dipped spoons for stirring coffee, sherried walnuts and even some nonedibles, such as bayberry potpourri.

– When making gifts, don’t forget your friends’ canines – or perhaps your own canine friends. Here’s a page of about 75 recipes for homemade dog treats, from apple-crunch pupcakes to imitation Milk-Bones. The names of these treats are half the fun – some of the odder ones include Snickerpoodles and Peanut Butter Puppy Poppers. go to website homemade dog treats

– Godiva chocolates are scrumptious, but so expensive. Fortunately for home cooks, the chocolatier has put a lengthy list of candy recipes on its Web site. You may not feel up to tackling Ancho Chile Devil’s Food Cupcakes with Mango Ice Cream, but surely your friends would appreciate a gift of almond-pistachio biscotti. But if you’d also like to mimic Godiva’s fancy gold wrapping, you’re on your own.

– You’ve probably seen or received “sand art brownies,” glass jars filled with layered brownie ingredients, all ready for mixing. But brownies aren’t the only recipe that can be made ready for gifts in this way. At Gifts in a Jar, recipe suggestions include pizza dough, shortbread and turkey noodle soup.