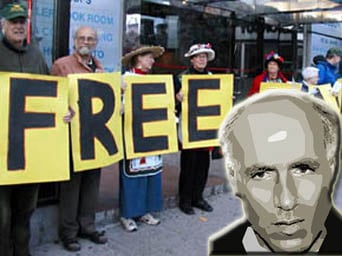 On Thursday in Tel Aviv, the High Court judges ruled that Mordechai Vanunu’s petition that he wrote over two months ago must be answered within 30 days:

The Citizenship Revocation Law passed in March enables the courts to revoke the citizenship of those convicted of crimes against the state, including treason.

Vanunu was convicted of treason, served 18 years in jail and began his 8th year of open air captivity in April waiting for Israel to allow him his right to leave the state.

In the petition, Vanunu’s lawyer Feldman said Vanunu is not able to “find his place in Israeli society” because he is hounded by the media and by the public, who still refer to him as the “nuclear spy”.

Vanunu’s many years of requesting to leave the country have been denied by Israel in the ‘holy’ name of SECURITY based on the grounds that he might reveal additional state secrets about a place he has not set foot into since 1986!

What Israel and USA both really fear is the further exposing of what Vanunu told about in 1986 about Israel-USA nuclear deceptions.

It is Israel and USA collusion that denies Vanunu and Palestinians their human rights.

Israel’s very statehood was contingent upon upholding the UN UNIVERSAL DECLARATION OF HUMAN RIGHTS and as a Member State USA is obligated to hold ALL other Member States accountable to it: