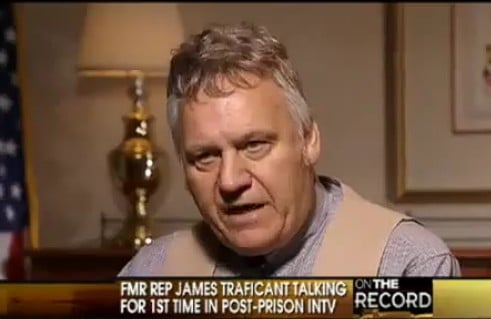 Opinion: Watch the Video and Tell Me if I am Wrong…

“the american taxpayers give Israel $15 to $20 billion, not $3 billion…while people in my district are losing their pensions…”  (Former Congressman Jim Traficant)

Traficant, in this 2009 Fox interview, gives us his opinions of congress, Israel and President Obama.  For many years, friends and business associates, many of whom consider themselves “conservative,” have asked me to help Traficant, targeted and jailed, I am now certain, for his honesty.

If Traficant is a crook, we need more of his ilk.

Traficant, a 17 year member of congress, was targeted by Israel in 2002 and convicted of bribery.  He spent 7 years in prison.

The only member of congress to support him was Gary Condit, targeted in the Chandra Levy murder which has now been credited to someone else.

Levy’s murder, in reality, tracks two ways, to Israel and to the office of the Vice President of the United States, Richard Cheney.

Interviewer Gretta van Sustern, while playing the “Antisemite card” fails to note, in the midst of a discussion of Jewish control of the American media that she, herself, works for Fox News, an American network owned by an Israeli citizen now under investigation by the Attorney General of the United States.

Good interview, short, always a good thing.  Jim Traficant will speak for himself here, as much as he feels he may on Fox News.  In private, Traficant will go well beyond this, right into the area of sanity, American patriotism and reality.